Like other media in the period between Christmas and New Year’s, this is a rerun, though it is slightly enhanced from its original appearance eight years ago. But—the BugLady promises that it does not contain elves, reindeer, Grinches, chipmunks, snowmen, or Jimmy Stewart.

For years, the BugLady misidentified this leggy, inch-long beetle as a Bombardier beetle (genus Brachinus), but having finally managed a decent photo of one, she was able to identify it as a False bombardier beetle (genus Galerita), and she learned the secret handshake—Brachinus have red heads and Galerita have black heads. According to bugguide.net, Galerita comes from the Latin galeritus, meaning wearing a fur hat. 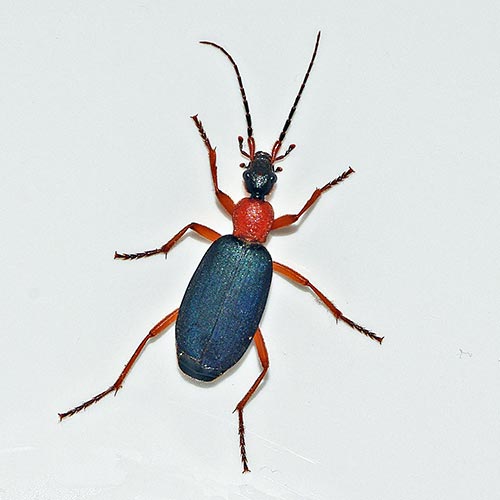 Both are in the Ground beetle family Carabidae, a group of (mostly) dark-colored, speedy, long-lived, nocturnal carnivores. Their elytra (the two hardened front wings that provide protection for the flying wings folded beneath) are often shiny and pitted or grooved. Many of the more talented members of the family are able to produce noxious chemicals to spray on their enemies. The late Thomas Eisner, entomologist extraordinaire, explained that while elytra help beetles by protecting the flying wings from damage, they potentially put beetles in harm’s way because the flying wings are not “flight-ready”—in order to fly, the beetle must first unfold the membranous hind set of wings from under the rigid front set, and that takes time. So, beetles have developed predator deterrents, and “most often these defenses take the form of dischargeable glands, present in the abdomen, and opening on or near the abdominal tip.” Such glands are a standard feature in a number of beetle families, including the Carabidae, Dytiscidae, and Gyrinidae [the ground beetles, predaceous water beetles, and whirligig beetles].

The Brachinus Bombardier beetle, not pictured here, is a chemical marvel. According to Eaton and Kaufman in their Field Guide to Insects of North America, the Bombardier beetle can squirt nasty stuff, which discourages some predators and can stain people’s skin, in rapid-fire bursts or pulses (it’s the only insect known to have a pulse-jet) accompanied (like fireworks) by an audible “pop” and a visual “puff.” As a bonus the stuff has a temperature of 100 degrees! Centigrade! A pretty good trick for a cold-blooded critter.

This volatile load is not carried around “as is”, it is assembled on demand. The very flexible trailing end of its abdomen houses, along with the usual insect paraphernalia, two large glands (one left, one right), each with its own “exhaust pipe.” Each gland is divided into two sequential chambers separated by a valve. The larger chamber contains hydroquinones and hydrogen peroxide (HQs and HP), and the smaller or reactor chamber holds oxidative enzymes (OE). Both inorganic and organic chemistry were a mystery to the BugLady, but not, apparently, to the Bombardier beetle. When threatened, the Bombardier beetle presumably squeezes some HQ’s and HP into the OE in the reactor chamber, where the chemicals mix and produce a thermodynamic reaction—smoke, mirrors, liquid and heat—that can be precisely aimed. Waldbauer, in his The Handy Bug Answer Book, claims that drop for drop, the chemical is more potent than skunk spray, and says that a toad that is sprayed in the mouth gags, sticks out its tongue and rubs it against the ground. The hot spray from a large Bombardier Beetle is also painful to humans.

This False Bombardier Beetle (Galerita janus) (probably) has dialed it back just a bit. Its spray consists mainly (80%) of concentrated formic acid (which is also deployed by ants), with some acetic acid and wetting agents thrown in. Formic acid smells bad and is noxious to vertebrate and invertebrate pursuers alike. Paired abdominal glands are also standard equipment in the False Bombardier Beetle, but they only consist of a storage chamber and a delivery chamber that is surrounded by compressor muscles. Scientists who experimented on the False Bombardier Beetle by pinching various legs and antennae report that the beetles spray accurately toward the side and the appendage that is being pinched, and that a left-side pinch activates only the left-side apparatus, and vice versa. Bursts of spray are only milliseconds long; it takes six or seven sprays to empty a False Bombardier Beetle and almost 5 weeks to completely recharge. 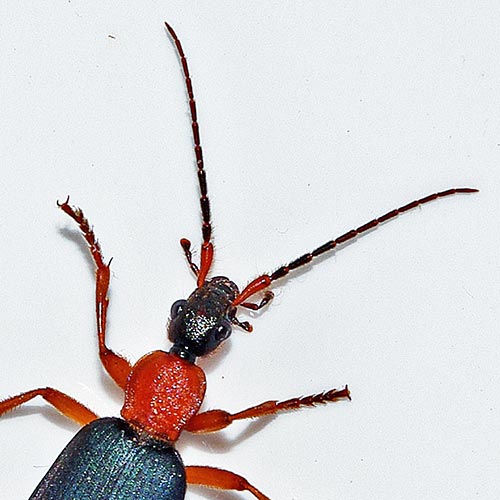 To the people who laugh at the BugLady’s album of indoor bugs, she has this to say: Researchers studied 50 homes in Raleigh NC, cataloging every arthropod they saw. They found 10,000+ specimens and concluded that each home averaged 93 species from 62 families of insects and spiders, with some larger homes topping 500 species. Most were a big surprise to homeowners; some were typical “house bugs,” but many were outside bugs that wandered in; and true “pest species” were rare.

Folks sometimes ask the BugLady how she gets some of her photos. Trade Secret #1 is that insects, being both cold-blooded and quick, are slowed down a bit by a brief sojourn in the refrigerator (a longer stay, alas, accidentally kills them). Her mashed potato serving bowl made a perfect backdrop for this beetle.

Life on the Pond