The BugLady hasn’t seen an Eight-spotted Forester Moth (Alypia octomaculata) since she started using a digital camera, which is surprising, because they’re considered common and because the caterpillars’ host plants are wild grape and Virginia Creeper, which resemble kudzu here in God’s Country these days.

The EsFM is a smallish (1 ½ inch wingspread), flashy, day-flying moth that is often mistaken for a butterfly when it’s nectaring on flowers. While not knobbed like a butterfly’s, its antennae are slim (simple), not feathery. It has black wings with two cream-colored spots on each forewing and two white spots on each hind wing (= 8). Its body and legs are also black, accented by yellow “epaulets” called tegulae on the thorax at the base of each wing and by startling tufts of orange hairs at the tops of its first and second pairs of legs. One theory is that the orange tufts resemble the packed pollen baskets of a bee. The BugLady thinks it’s interesting that a number of other small moths associated with grapes are also black with white polka dots. For an excellent series of EsFM pictures, check Rairie Haven’s Eight-spotted Forester

Their caterpillars graze on leaves of plants in the grape family including wild and domestic grapes, woodbine/Virginia Creeper, and Ampelopsis sp. (peppervine, porcelain berry and false grape) in forest edges and sunny spots, and on vine-covered buildings. EsFMs are in the Owlet Moth family (Noctuidae) and in the Subfamily Agaristinae. There are five species in the genus north of Mexico; EsFMs are found from the Great Plains to the Atlantic, edging over into Canada. 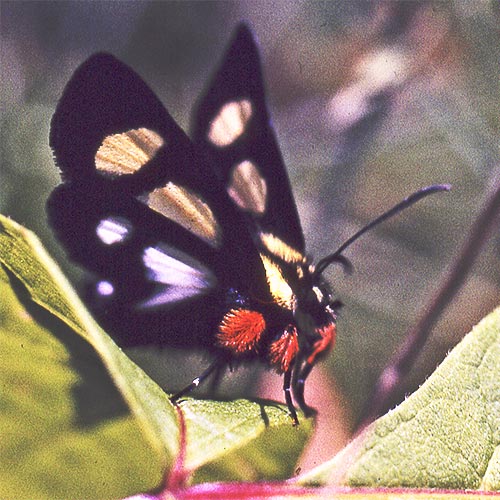 Ms. EsFM deposits her eggs on host plants in late spring. In our area, they’re univoltine—there’s only one brood/generation per year—but in warmer climes there may be two broods and even attempts at a third. Whatever generation is around in fall will spin a soft-walled chamber in some punky material—wood, soil, trash—and overwinter inside as a pupa. Researchers who rear them say that if the mature caterpillars are not given something pulpy to tunnel into, they will die.

The timing of their emergence from the pupal case can be capricious. In 1977, an entomologist raised 80 caterpillars and ultimately got 50 pupae that he stored in a box at outside temperatures. Nine adults emerged in the spring of 1978; twenty-five emerged in 1979; four appeared in 1980 and one more the following year. So EsFMs, like a number of other moths in a variety of families, have the ability to remain in diapause (dormancy, a state of suspended animation during which development is delayed) for a considerable length of time. What triggers their exit is unknown.

EsFM caterpillars feed from their perches on the undersides of leaves, consuming the tenderest parts of the leaves and tendrils, and even stem tissue. They’re sometimes considered a pest in vineyards. In The Moth Book (1903) Holland says that “This very common insect, which sometimes proves a veritable plague by the depredations which it commits upon the foliage of the Ampelopsis, which is extensively grown in our cities as a decorative vine, is found everywhere in the northern Atlantic States, and ranges westward beyond the Mississippi.”

From time to time in her research, the BugLady comes across a website to share. The MOBugs Missouri’s Majority is fun to explore, and the BugLady appreciates the sentiment. She passes the site along, too, because of the January 23, 2013 post called “Jack Dempsey–A New Invasive Threat” about the consequences to aquatic systems when people dump the contents of their no-longer-wanted aquariums into ponds and streams. Exotics have an amazing ability to survive where they shouldn’t.