The Dot-tailed Whiteface dragonfly (Leucorrhina intacta) is a member of the Skimmer family, Libellulidae. There are over a thousand species in this brightly-colored family gracing the skies worldwide. A tenth of those are native to North America, making Skimmers the largest American dragonfly family. There are seven species of whitefaces in north of the Rio Grande, some with spectacular bands of crimson on their abdomens and thoraxes. The Dot-tailed whiteface cuts quite a swath across the continent, but its range is largely in the northern states and Canada. 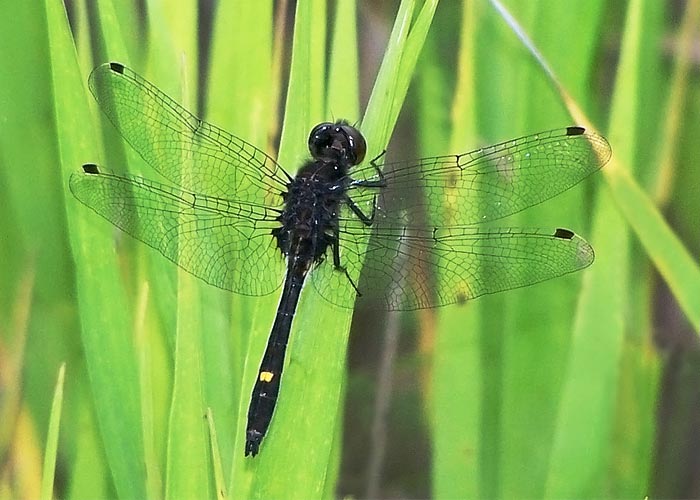 The BugLady loves common names—they belong to the people who live side-by-side with a plant or animal. Other than their scientific (Latin) names, there’s no single “right” name for any species, and many plants and animals have unique regional names. When the BugLady is looking at a critter with kids, she likes to ask them what they would name it, and it would be hard to conjure up a more logical name than Dot-tailed whiteface (DtWf) for this dragonfly. For a better look at the “white-faced” part of the equation (the BugLady and her camera have not been able to sneak around to the front end of one yet), see see close-up from the Bugguide website. Both males and females have the “dot-tail” and the “white face” (a male Skimmer often needs a few days to reach his full color intensity after he emerges as a winged adult). Females tend to have a few yellow splotches along the top of the abdomen, and juveniles have even more. Young or old, male or female, DtWfs have a black triangle at the base of the hind wing. The BugLady is wondering if it is a coincidence that, like some of the other early dragonflies, DtWfs have a pretty hairy thorax. Their body is 1.3” long; their wingspread is a little more. 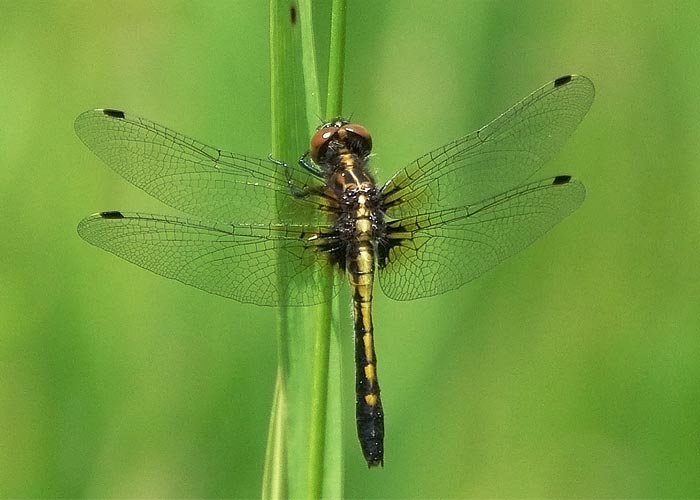 DtWfs enjoy most kinds of quiet waters—bogs, marshes, swamps, sloughs, farm ponds, and even very slow streams—s long as there are low aquatic plants to perch on. The BugLady frequently sees them in her grassy field, some distance from water. They bask on floating water lily leaves and on the ground, and they don’t gain much altitude when they fly. DtWfs emerge by late spring and fly during a good chunk of the summer. 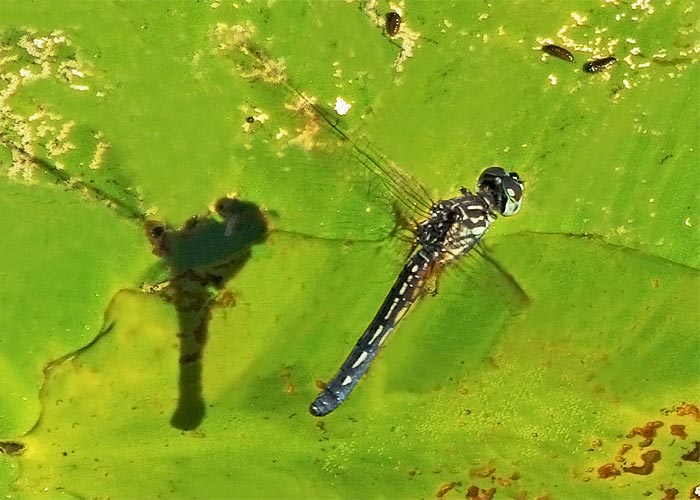 Male DtWfs defend a moveable territory that is two to 4 yards wide—when they feel like it. They watch for females and for other males from perches. Most sources agree that DtWfs mate while sitting on vegetation near the water and that the female lays her eggs in shallow, plant-filled waters by hovering just above the surface and dipping the tip of her abdomen into the water (like the fellow-Skimmer female Blue Dasher pictured). Males “hover guard” their ladies, flying above and a little behind them as they oviposit (the male Blue Dasher guards from a nearby perch). Males will also grab/clasp intruding males and, in a behavior called—wait for it—“karate guarding,” hold them in tandem to keep them away from ovipositing females. 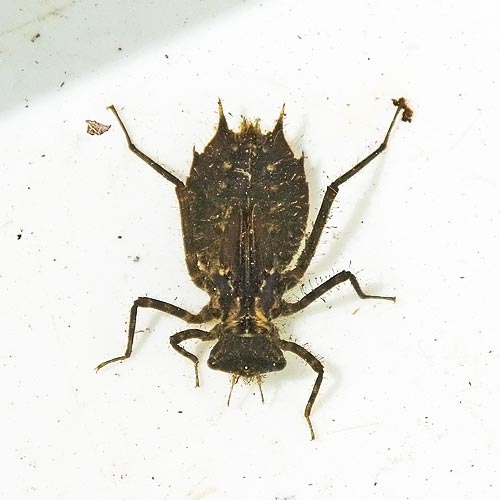