The BugLady started hearing cicadas recently, so she spruced up this episode from 2007 (many new facts and photos). Warning: Parenthesis alert.

Cicadas that whine monotonously from the treetops in the heat of July and August are heard far more often than they are seen. They are commonly (and erroneously) referred to as “locusts,” named after members of a noisy-but-completely-unrelated grasshopper group. It’s a mistake that we owe, apparently, to the early English settlers, who heard cicadas (in Biblical numbers) in the canopy of the vast Eastern forest and assumed they were some unfamiliar locust. Interestingly, the Greek word for grasshopper (tettigonion) is the diminutive of the Greek word for cicada (tettix) (the BugLady loves the etymology of entomology. Bonus: The Latin word cicada means buzzer). Because of their appearance and the noise they make, cicadas are on a lot of people’s radar, and they’ve collected names like “Annual cicada,” “Dogday Harvestfly,” “Jar fly,” “17-year Locust” and “Periodical Locust” and more. 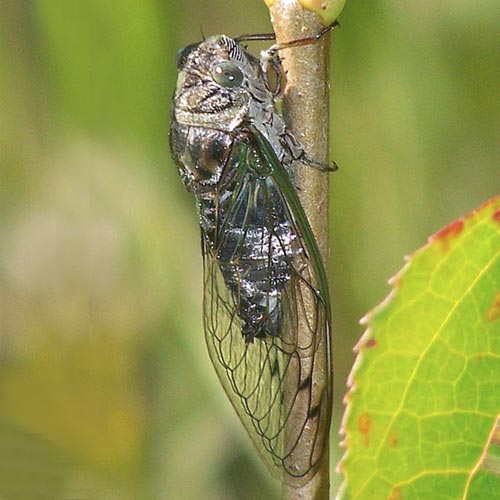 There are about 170 species of cicadas, family Cicadidae, in North America north of Mexico. Wisconsin has nine species — Periodical cicadas like the famous 17-year locust, genus Magicicada; and Annual/Dogday Cicadas, mostly in the genus Neotibicen (formerly called Tibicen).

The Rock Stars of the cicada world are the 17-year locusts, whose range barely crosses our southern border. Our soils have traditionally been too cold for Magicicada, but Climate Change may bring this insect—and others less pleasant—farther north. Their predictable 13 and 17 year irruptions spawn cicada festivals and cook-offs and modifications of the outdoor concert schedules at Ravenna and Tanglewood. One source, the (Cicada Mania website, said that planners of outdoor weddings also keep track of the cicada calendar; another said that the historic cycles of the periodic cicadas may be shifting due to Global Warming.

Neotibicen adults are green, black, and brown, bullet-shaped, and one-to-two inches long; they have four wings (the front pair twice as long as the rear pair), short antennae, two small compound “bug-eyes,” and three simple eyes. They look fearsome, but they’re harmless. Our Annual/Dogday cicadas have overlapping two to five year cycles so they are with us each summer. “Dogday” is a nod to the dog days of summer when hot/cicada weather coincides with the appearance of Sirius, the Dog Star, in the Big Dog constellation. Neotibicen canicularis is a common species in Wisconsin.

Most male cicadas emerge during a relatively compressed period of time and vocalize to attract females, and their calls also draw competing males to the party (females don’t speak, but in some species, they do flick their wings). Kaufman, in his Field Guide to Insects of North America, mentions that some yard-care machinery sounds like cicadas and will attract throngs of females. Sounds Hitchcockian. The BugLady calls theirs a “Normandy Beach” strategy of reproduction—if you throw enough soldiers onto the beach, some will get through. Ecologists call it “predator satiation”—mobilize more than enough cicadas to fill up your predators in order to ensure the next generation. Cicadas provide a super-sized meal for songbirds, mantises, and big spiders; and large, solitary “Cicada-killer” wasps snag them and stash them for the future dining pleasure of their offspring. Gulls and terns will take advantage of boom years.

Males of each species have a characteristic call which is produced by internal structures called “tymbals.” Large cavities, located at the juncture of the thorax and abdomen, are covered with membranes, effectively turning them into drumheads. When these drumheads are vibrated by powerful muscles, they produce a series of rapid clicks, and the almost-empty abdomen acts like an amplifier for the sound. The buzz can be modified depending on the position of the abdomen and can be softened if the insect is alarmed. Cicadas in southeastern Wisconsin tend to be monotone, diurnal callers, but some species in other parts of the country make a throbbing sound that continues well into the evening. See Songs of Insects website (On the far left of the webpage, see the black text “Navigate to the Species Pages,” and choose “Cicadas”).

They have other sounds in their vocabulary, too—a you’re-invading-my-personal-space “encounter call,” a soft, one-on-one courtship call (some species), and a stuttering distress call (the BugLady has heard this as a catbird chased a cicada outside her window, a chase that ended with a triumphant, if muffled, “meow”).

A pair of auditory organs is located on the abdomen—if sound is produced, there must be “ears” (tympana) to hear it. Males can decrease the sensitivity of their tympana while they’re calling, damping down the volume by about 20 dB so they don’t damage their own hearing. Cicadas are one of our loudest singers, with some calls weighing in at 120 dB (chain saw, riveter, thunder, fireworks)—loud enough so that an extended “close encounter” could damage human hearing, too.

Along with their calls, cicadas are famous for the years they spend underground as nymphs. Ms. C. makes a slit in a twig with her tough ovipositor and inserts her eggs (often causing the bark to scar and twig tips to die and even drop off). When the tiny nymph hatches, it falls to the ground, burrows in, and spends the next years feeding on the sap of plant roots (Neotibicen canicularis likes oak and especially pine roots). Despite their numbers, cicadas don’t do much damage to the plants they sip on. Like its call, the number of years it spends in the soil depends on its species. When its appointed time has elapsed, the prehistoric-looking nymph tunnels up and excavates a cavity/”waiting room” just below the surface.

Donald W. Stokes, in A Guide to Observing Insect Lives reports that it uses its raptorial-looking front legs to excavate, rake and tamp the soil in order to camouflage the exit to its chamber (the BugLady uses empty cicada skins in an observation exercise, and those front legs inevitably fool her students into guessing that cicadas are predators). Under the cover of night, it hauls itself up out of the ground and climbs a vertical surface. There it splits the skin on its back and pulls out its adult body, pumps up its wings, and flies away, leaving behind an empty husk that Kaufman describes as “gnome-like” thanks to BugFan Laurel for providing the shot of the recently emerged cicada sitting on its shell. The newly-emerged (pinkish) cicada on a rock in two of the shots was happy that the BugLady couldn’t see it, because its wings were a bit soft for evasive maneuvers). For a video and slide show of a cicada emerging, scroll down to the “Life Cycle” section.

One theory about periodical cicadas’ long hiatus as nymphs is that it makes dinnertime totally unpredictable for the wasps—the nymphs’ life cycle is longer than that of its predators. 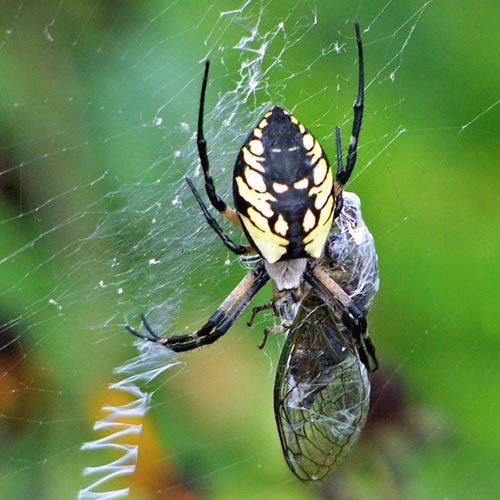 Adults live only a few weeks, siphoning sap from twigs (prior folklore held that they did not have operational mouthparts, but they do). The BugLady once got a phone call from a surprised naturalist who was stabbed while holding a cicada for the kids to see; after a while, it probably decided that she was a tree and was attempting to feed.

And, of course, grilled and fried cicadas, said to taste like almonds, are staples on the menus of many entomophagists (bug-eaters). Aristotle relished them. On that topic, according to Wikipedia, “In 2011, cicadas were incorporated into a single batch of ice cream in Columbia, Missouri, at Sparky’s. The ice creamery was advised by the public health department against making a second batch, a suggestion with which store owners complied.”

In the folklore department, cicada emergence is a metaphor for resurrection and immortality in some cultures. On a darker note, counting forward from the first Dogday cicada call is supposed to give us the date of the first frost, though some folklorists suggest that we should start counting at the peak or even the end of the calling period. Winner of the “Blatant Sexism Award” is the Greek writer Xenarchus, who said “Happy are cicadas, for they all have silent wives.”

The Songs of Insects by Elliott and Hershberger is a great source of information about the sounds of cicadas, katydids, crickets and locusts, the pictures are super, and it has a CD.

Traveling through time with the UWM Weather Station