The leaf beetle family, Chrysomelidae, is one of the largest insect families. In round numbers, there may be 35,000 species worldwide (1,700 of those in North America) with a bunch more awaiting scientific attention. Leaf beetles are often mistaken for lady bugs or for long-horned beetles (to whom, within the Great Hall of Beetles, they are closely related). They are oval-ish, mostly measure less than a half an inch, come in bright colors, have un-spectacular antennae, smallish heads often shielded by a large-ish prothorax (first segment of the thorax), short legs, and domed elytra (the hard wing covers that protect the top of the abdomen and a pair of flying wings and make a beetle a beetle). Young and old, they are vegetarians–adults feed on flowers or leaves, and larvae eat (or tunnel into) leaves, stems, or roots. They tend to be picky eaters, each species targeting just a few kinds of plants. Due to their eating habits, some Chrysomelids are plant pests (think Colorado Potato beetle*) and others are pest controls.

The BugLady, who is easily distracted by shiny objects, looks forward each year to seeing the very spiffy Dogbane Leaf Beetle (DLB) (Chrysochus auratus). Predictably, the DLB lives and feeds on dogbane (a close relative of milkweed) and on milkweed, in prairies and grasslands over the eastern half of North America. Classical language scholars will note that “auratus” comes from the Latin aureus, which means decorated with gold. The description of the DLB in The Audubon Society Field Guide to North American Insects and Spiders—“Head and thorax bright, shiny green. Elytra often coppery, brassy, or bluish.”—hardly does the beetle justice. The DLB’s incandescence is the result of the play of light on exceedingly small, tilted plates that overlay its pigment layer. Light bounces off both the pigment and the plates, and the colors change with the angle of the observer. Life is Physics. The BugLady loves that the soles of their feet (and legs) are white, like tiny spats. It is assumed that other DLBs enjoy the light-show as much as we do, or it would be pointless for the beetle to expend the energy growing all those colors. But, one theory of their iridescence is that it allows them to hide in plain sight. Read on. 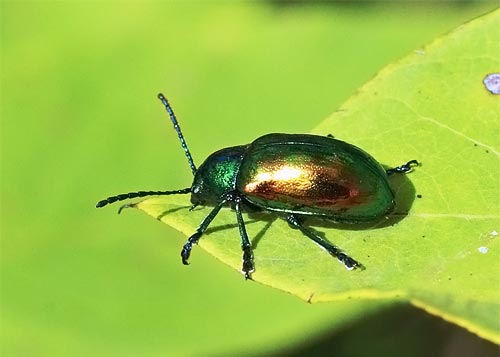 The sap of milkweeds contains a cardiac poison that is undoubtedly the plant’s defense against grazers. Milkweed-eaters are toxic because, as larvae or adults or both, they ingest this sap, and many sport Mother Nature’s warning colors of red or yellow and black. Dogbane’s milky sap is also harmful, and some think that the DLB’s flashy attire and out-in-the-open feeding habits are an advertisement of their inedibility. Dogbane sap, like milkweed sap, presents a second challenge—it is “tacky” to the touch and could potentially glue various beetle-parts together. A scientist wondered how the DLBs cope with the stickiness and observed their feeding closely. He saw that a DLB makes an incision on a leaf edge “upstream” of where it intends to feed. As the sap flows out at the cut, the DLB moves “downstream” to feed below the leak. When a beetle inevitably does get some sap on its mouth, it acts like someone with gum on their shoe. It puts its face against the leaf and then walks backward (frontward would get its legs sap-entangled) as it rubs its face on the leaf. The BugLady has not read about other common milkweed feeders having similar behavioral adaptations. 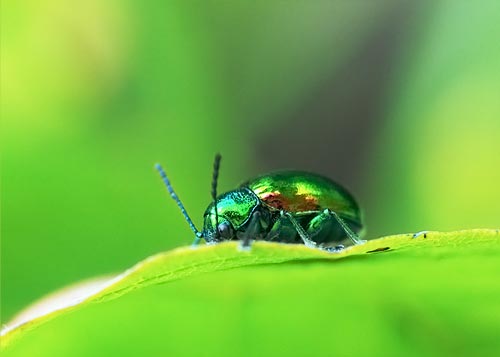 The DLB’s fiery colors might also be an advertisement for its second line of defense—a spot of chemical warfare. According to one reference, DLBs store, in special glands, the cardiac glycosides they ingest with the dogbane leaf pulp. This cache of toxins is available to spray on persistent/callow predators, who may get a face full of the noxious goo. Plan C calls for these beetles bail, drop to the ground and hide among leaf litter when disturbed.

DLBs are poster children for promiscuity, with adult beetles mating as many as 50 times during their flight period. Males initiate the courtship, and they stick around and piggyback on females after mating in an attempt to deter other males. Eggs are laid on the host dogbane/milkweed or on the ground nearby. The grubs feed on roots and stay underground to pupate. They overwinter as adults. 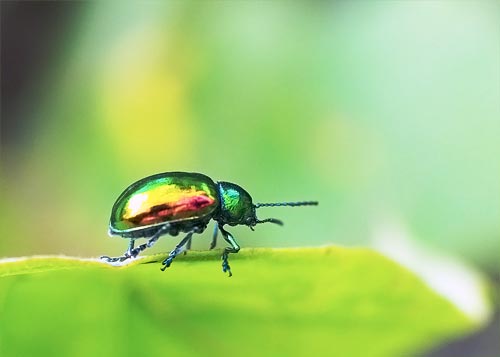 * The Colorado Potato beetle’s is an amazing story of a home-grown pest. A native leaf beetle, its pre-settlement range was pretty much restricted to the Missouri River Basin, where it fed quietly on a few members of the Potato/Tomato family, in harmony with its environment. Then the frontier pushed West, bringing with it the kitchen gardens and Irish potatoes of the settlers (never mind that potatoes are native to the Andes, had been brought to the Old World a few centuries earlier, had conquered Europe, and then had been hauled back across the Atlantic and introduced to New England). With its food source increasing logarithmically, the Colorado potato beetle left Rockies and headed East in 1854, hop-scotching from garden to garden and arriving on the Atlantic shores twenty years later, a reverse pioneer.