Life is busy—here’s a rerun from 2010 with some new bug facts thrown in for good measure.

The leaf beetle family, Chrysomelidae, is one of the largest insect families. In round numbers, there may be 35,000 species worldwide (1,700 of those in North America) with a bunch more awaiting scientific attention. Leaf beetles are often mistaken for lady bugs or for long-horned beetles (to whom, within the Great Tree of Beetles, they are closely related). Chrysomelids are oval, mostly less than a half inch long, come in bright colors, and have un-spectacular antennae, small-ish heads that are often shielded by a large-ish prothorax (first segment of the thorax), short legs, and domed elytra (the hard wing covers that protect the top of the abdomen and a pair of flying wings and make a beetle a beetle). Young and old, they are vegetarians—adults feed on flowers or leaves, and larvae eat (or tunnel through) leaves, stems, or roots. They tend to be picky eaters, each species targeting just a few kinds of plants. Due to their menu choices, some Chrysomelids are plant pests (think Colorado Potato beetle) but others are bio-controls of nuisance plants.

The BugLady, who is easily distracted by shiny objects, looks forward each year to seeing the very spiffy Dogbane Leaf Beetle (Chrysochus auratus). Predictably, the Dogbane leaf beetle lives and feeds on dogbane (a close relative of milkweed) and on milkweed, too, in edges, open woods, waste spaces, prairies and grasslands over the eastern two-thirds of North America. Classical language scholars will note that auratus comes from the Latin aureus, which means “decorated with gold.” The description of the Dogbane leaf beetle in The Audubon Society Field Guide to North American Insects and Spiders—“Head and thorax bright, shiny green. Elytra often coppery, brassy, or bluish”—hardly does the beetle justice. 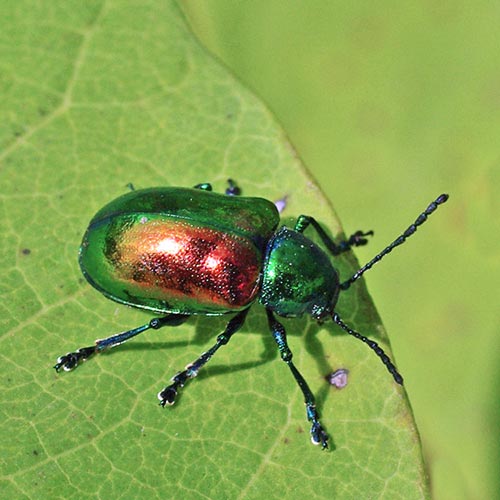 The beetle’s incandescence comes to us through the magic of physics—the play of light on exceedingly small, tilted plates that overlay its pigment layer. Light bounces off both the pigment and the plates, and the colors change with the angle of the observer. The BugLady loves that the soles of their feet are white, like tiny spats. It is assumed that other Dogbane leaf beetles enjoy the light-show as much as we do, or it would be pointless for the beetle to expend its energy growing all those colors (males and females look alike). But, one theory is that their iridescence allows them to hide in plain sight.

The sap of milkweeds contains cardiac poisons (cardenolides) that are the plant’s defense against grazers. Milkweed-eaters are toxic because, as larvae or adults or both, they ingest this sap, and either metabolize it or sequester it in special structures (dogbane beetles sequester). Many milkweed feeders sport Mother Nature’s aposematic/warning colors of red or yellow and black.

Dogbane’s milky sap is harmful, too, and some think that the dogbane leaf beetle’s flashy attire and out-in-the-open feeding habits are an advertisement of their inedibility (larvae feed on the plant roots and accumulate enough toxins to make themselves unattractive to parasitic wasps). The beetle’s fiery colors might also be an advertisement for its second line of defense—a spot of chemical warfare. Their cache of cardiac glycosides is available to spray on persistent/callow predators, who get a face full of the noxious goo. Plan C calls for these beetles to bail—drop to the ground and hide among leaf litter when disturbed.

Dogbane sap, like milkweed sap, presents another challenge—it is “tacky” to the touch and could potentially glue various beetle parts together. One scientist wondered how the beetles cope with the stickiness and observed their feeding closely, He saw that a Dogbane leaf beetle makes an incision on a leaf edge (less sap there than at the leaf’s center), and as the sap flows out at the cut, the Dogbane leaf beetle moves down to feed below the “leak.” When a beetle inevitably does get some sap on its mouth, it acts like someone with gum on their shoe. It puts its face against the leaf and then walks backward (frontward would get its legs sap-entangled) as it rubs its face on the leaf (leaving bits of latex on the leaf).

Dogbane leaf beetles are poster children for promiscuity, with adult beetles mating as many as 50 times during their six to eight week flight period. Males initiate the courtship, and they stick around, piggyback on the females after mating, in an attempt to deter other males. Eggs are laid in protective capsules on host plant leaves or on the ground nearby. The grubs hatch by mid-summer, feed on roots and stay underground to pupate. There’s a single generation per year.

According to the wonderful Critter Catalog on the University of Michigan biokids website, “Leaf beetles use visual, chemical, and scent information about their environment when moving into their host plant. Dogbane leaf beetles use chemical signals to communicate with each other in mating. The chemicals are specific to dogbane leaf beetles, and make it less likely that they would mate with other beetles like cobalt milkweed beetles.” The system’s apparently not foolproof, because are misalliances in the west, where the dogbane leaf beetle overlaps with the equally-awesome cobalt leaf beetle. These dalliances result in sterile offspring that range in color from blue-green to dark purple.

The BugLady has been curious/concerned about the several-year absence of the beetles from the dogbane patch where she photographed these. Dogbane beetles are pretty sedentary—generally moving only short distances within their home dogbane patch and recolonizing slowly from larger plots to peripheral ones.  In his 1992 paper on the movements of dogbane leaf beetles, Charles E. Williams noted that “adults often occur in small, sporadically distributed populations even when host plants are abundant.” He listed the ideal conditions for recolonization as

Philatelists will recall that the Dogbane leaf beetle graced a postage stamp in 1999.