The Deer Tick (Ixodes scapularis) (not to be confused with the musical group Deer Tick ) is a critter whose escapades are well known (or should be) to those of us who live here in God’s Country. It is notorious for its ability to spread Lyme (not Lymes) disease and because its sesame-seed-size makes “tick checks” a challenge. 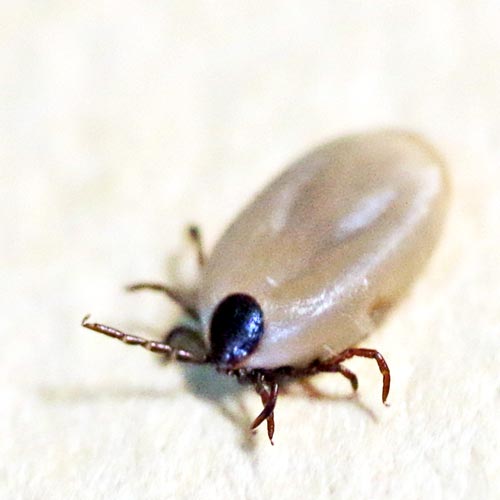 When the BugLady moved into her rural home 36 years ago, ticks were scarce, and she plucked a wood tick off the dog every 5 years or so. In the past three or four years, both Dog/Wood ticks (Dermacentor variabilis) and Deer ticks (a.k.a. Black-legged ticks) have been showing their little heads by late April or early May. Their ranges are expanding or their populations booming or both (chiggers are way more numerous, too). An article in Science Daily (June 22, 2011) refers to the “steady march of deer ticks across the Upper Midwest” and reports the rate of their advance through Indiana and Illinois (having successfully occupied Minnesota and Wisconsin) at two counties per year.

A graphic from the University of Florida puts DTs in perspective (scroll down to the ruler). A non-feeding adult DT is flat and dark (females may look dark red), about 3mm long, with eight black legs and a black “shield” (called a scutum) in back of its head. DTs don’t have any white/light markings on the scutum but wood ticks do. A feeding adult female looks very different, like a tiny, over-filled blue-gray balloon (as tight as a tick) (the BugLady is trying to avoid comparisons to grapes here, lest she put BugFans off their feed).

DTs lead a complex, three-stage, two-year life. All three stages are mobile and all three require a blood meal that may take three to five days to complete. Adult DTs are fairly impervious to frosts and can even be found on winter days that are above freezing. In spring, Mom has a big meal (adult males rarely feed), mates, drops to the ground, and lays thousands of eggs. The first post-egg stage is a six-legged larva that feeds once during mid-summer on a bird or a small mammal (it’s especially fond of white-footed mice). The well-fed larva leaves its host and overwinters in the leaf litter. The following spring it molts into a poppy seed-sized nymph that feeds on another host (another mouse, maybe, or a raccoon or squirrel) and then molts into an adult that becomes active in fall. Adults favor large mammals like white-tailed deer.

Ms. DT finds Mr. DT through the magic of aggregation pheromones (chemical “perfumes”) that cause DTs to gather in groups, allowing boy to meet girl. They may mate on a host, on vegetation, or on the ground. He dies after mating a few times; she dies after laying eggs.

Where does the DT pick up Lyme disease? Typically not from Mom, even if she is carrying it. An uninfected larva or nymph can pick up the disease from its host; an infected larva can transmit it to a host. Once they’ve picked up the infection, ticks retain it for the rest of their lives. Some sources estimate that in high-Lyme areas, 25% of nymphal DTs and 50% of adults carry the bacterium that causes the disease. According to the American Lyme Foundation, fewer than 5% of DTs south of Maryland are carriers. Dog ticks do not spread Lyme disease.

DTs are sanguivores (animals that ingest fresh blood). To find a host, they sit on vegetation or on the ground in a “questing position” with legs poised, sensing the air, and ready to hop aboard an unwitting passer-by. They typically aren’t eaten by predators because they’re simply too small to see. The biggest mortality factor for ticks may be starvation, but harsh climate can also affect them.

DTs may pack the germs of a number of unpleasant diseases into that tiny body, and scientists are still finding new ones. Besides being the main vector for the bacterium that causes Lyme disease, their bite may carry other bacteria and a few parasites. Tiny nymphal ticks far outnumber their elders, and because nymphal ticks are most active during the period when we’re all outside in summer, bites from nymphal ticks are presumed to be the cause of most human infections. Pets can get Lyme disease, too; talk to your vet. 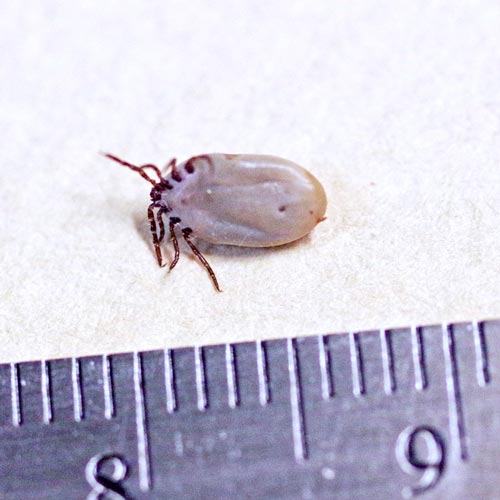 Lyme disease is an initially-flu-like disease that will escalate if ignored, and it is more treatable early than late. The CDC has a very comprehensive website with information about tests, symptoms, treatment, and prevention at http://www.cdc.gov/lyme/, (there’s disagreement about Lyme disease testing and treatment, mainly from organizations whose members have spent months and years looking for a clear diagnosis and an effective cure for this frustrating disease). Lyme disease is not “catching,” and you can’t get it from eating venison from an infected deer (but kneeling on the ground dressing out a deer puts you right down there in DT territory).

Scientists have discovered some intricate ways that DTs fit into the ecological jigsaw puzzle:

So—stay inside until winter? Nope. Standard precautions include wearing light-colored clothing, using repellants containing DEET, and pulling socks over your pants cuffs to make it harder for ticks to duck and hide. According to the Center for Disease Control, “In most cases, the tick must be attached for 36-48 hours or more before the Lyme disease bacterium can be transmitted,” so do thorough tick checks of your hairline and all your nooks and crannies.

… the BugLady feels like stuff is crawling on her …