Darkling beetles are small-to-medium-sized, dark, slow-moving beetles in the family Tenebrionidae. Their elytra (the hard forewings wings that protect the flying wings), are often grooved and/or pitted, and as Lorus and Marjory Milne (under)state in the Audubon Society Field Guide to North American Insects and Spiders, the adults look like adults of a number of other beetle groups. The larvae resemble “wireworms,” the larvae of click beetles, of previous BOTW fame. The BugLady suspects that this darkling beetle is in the Genus Tenebrio, a cosmopolitan genus whose larvae are the famous “mealworms” that are sold in pet stores. 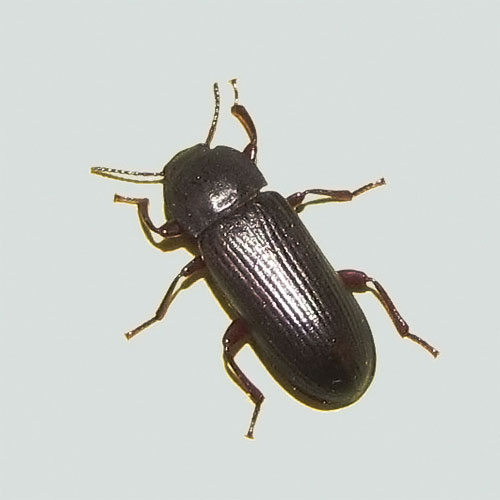 Both the adults and larvae are nocturnal scavengers on “dead” material like clothing, rugs, stored foods, and plant and insect collections as well as on rotting wood and fungi. Tenebrionidae is about the 5th largest family in the Beetle order, and the Beetle order is the largest group of anything. There are about 1,200 species of darkling beetles in North America mostly in the West. According to Eaton and Kaufman in Field Guide to Insects of North America, “Many discharge repulsive aromatic chemicals when threatened or handled.”

Now, about this “picture-keying” thing (trying to match the insect in front of you—or worse, an insect you saw three weeks ago—to a picture on a page). The BugLady does it all the time—but with a profound respect for its limitations. There are about 700 species of butterflies north of the Rio Grande, and about the same number of bird species. You can easily fit each group between the covers of a portable-sized field guide (except Sibley, of course). There are at least 100,000 species of insects in North America, which includes about 30,000 species of beetles in the beetle order Coleoptera. 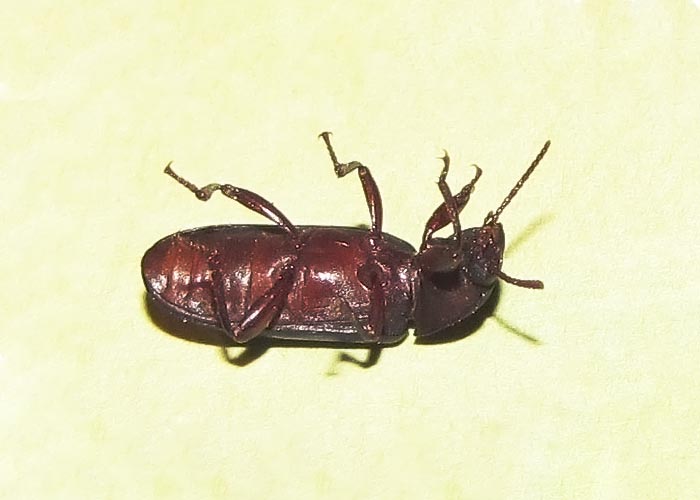 Medium-sized black beetle? The BugLady’s favorite insect guides are the two listed above. Eaton and Kaufman picture about 2,300 species of insects, and Lorus and Marjory Milne show about 600. Considerably less than 1% of beetle species can be shown in the average field guide, and a whole bunch of those beetles are medium-sized and black and are spread throughout many families in the beetle order. So, you spot a beetle, and you open a field guide, and you start looking at pictures (BugFans can expand their picture-keying options exponentially at bugguide.net). You settle on an exact match, and then you read the fine print and find that you’ve picked a beetle that’s found only in the simmering mud geysers of Yellowstone or the salt marshes of the Atlantic seaboard.

If you spot a picture of an insect that has a similar shape, color, proportions and range to the insect at hand, you might have chanced on the right family (the larger division above genus) or even the right genus. The genus and species arrangement of scientific classification—like Tenebrio molitor—is roughly like the sensible Chinese name order—last name first; first name last. “Smith John” tells us that this individual belongs to the larger clan of Smiths and is, specifically, John.

There are many insects that differ only minutely from others in their genus and do not even have common names. In some cases, identifying the insect’s family will be as far as you can go. Bottom line, the BugLady encourages picture-keying because looking at all those pictures opens us to the amazing diversity of insects and starts us on a path toward recognizing the characteristics of the different groups. Sometimes, you might truly have a “Bingo!” moment, but don’t mistake it for a “scientific” process. Caveat emptor.