The BugLady is literally surrounded by Cross Orbweavers (Araneus diadematus). Egg cases were attached to the house and porch last fall, and masses of spiderlings emerged in early summer; she often has to break through a web to get out the door. In her research, the BugLady has seen this group labeled as orbweavers, orb-weavers, and orb weavers, even within the scientific community; she’ll use “orbweavers” because it annoys Spellcheck). 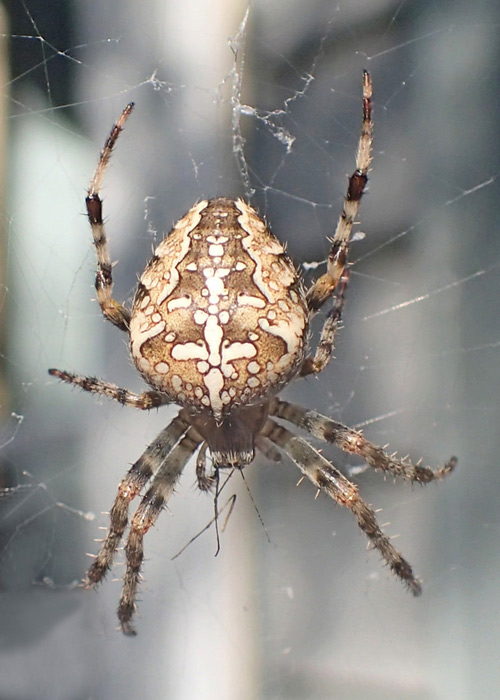 They’re called orbweavers (family Araneidae) because the webs they spin are the classic, round, flat webs that we learn about as kids. You know – Charlotte’s people. Bugguide.net tells us that

“All orb weavers spin some sort of web consisting of concentric circles (smaller circles within larger circles) with “spokes” radially going from the center outwards toward the anchor points …. Most orb weaver webs are vertical (perpendicular to the ground), but there are a handful that will spin a horizontal web (parallel to the ground). Some of the webs can be extremely large (over 3 feet in diameter)”

(A few webs on the BugLady’s porch have approached that size; and lately, the BugLady has had fun luring mosquitoes into them, which the large female seems to eat directly without wrapping and storing. Hors d oeuvres).

Speaking of which, spiders are carnivores, right? Well… mostly. Researchers Eggs and Sanders noted in a paper in the journal PLOS that when orbweavers, including Cross orbweavers, recycle (eat) old webs, they also consume pollen and fungal spores that have stuck to the strands. And they do it on purpose – some pollen grains are too large to “swallow” casually and have to be pre-softened externally by enzymes, just like animal prey. They reckoned that about 25% of the diet of juvenile orbweavers is pollen. 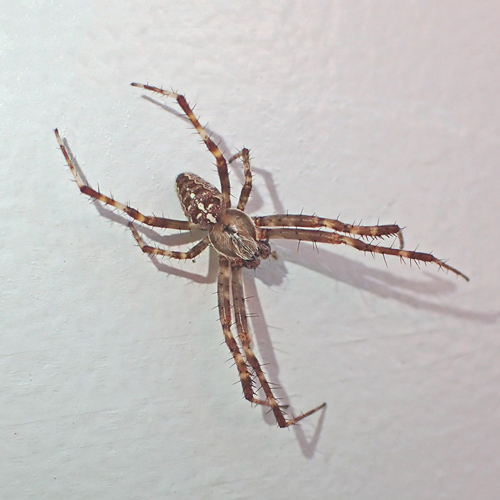 Cross Orbweavers were mentioned briefly in a 2012 BOTW about several species of large orbweavers. For basic information about the group, check out this previous BOTW.

The Cross orbweaver’s range is described as “Holarctic,” which means that it’s found in northern areas of the New World (where’s it’s an immigrant) and of the Old. In the New World, it’s found in southern Canada and across the United States from New Jersey to northern California. With a range like that, it’s picked up a bunch of common names, among them European garden spider, house spider, diadem spider, cross spider, pumpkin spider (a name shared by the Marbled orbweaver) and crowned orb weaver. It’s a well-known species (because it likes people and their habitations, especially if those habitations have exterior lighting) and a well-studied one.

They hatch in spring, stay together until their first molt (the collective noun for spiders is a “cluster” or “clutter”), and then scatter, and spiderlings that were tiny in June have reached lunker size now, at the end of their lives. In late summer, mature males may “adopt” immature females in hopes of a future liaison. A male approaches a female cautiously, with lots of advance-and-retreat, and tentative touching; she is bigger and hungrier than he is, and she may have a different definition of “romantic dinner.” In any case, males don’t survive long after mating, and yes, she may eat him. She produces and hides an egg sac that contains as many as 800 eggs and is almost as big as she is (see the series of pictures at https://bugguide.net/node/view/719111/bgimage), and she hangs around to guard it for the rest of her life. The first killing frost finishes off any survivors (interestingly, Cross orbweavers have a two-year life cycle in Europe.) 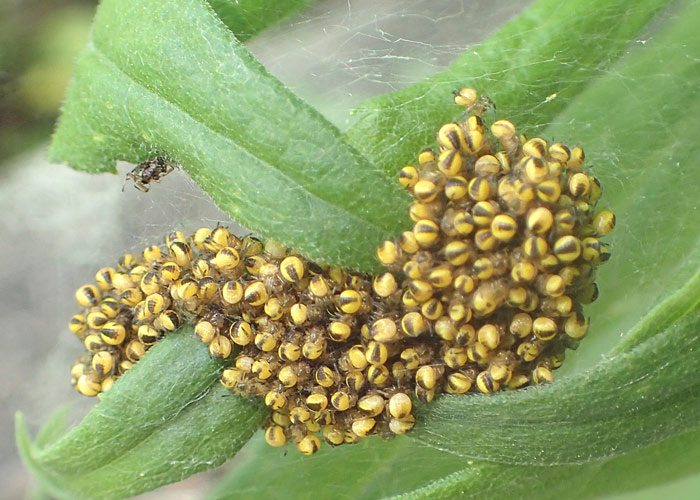 Scientists have, indeed, studied the heck out of Cross orbweavers. They’ve looked at the complex business of web-building, at the factors that affect the placement/angle of the radius threads (spokes), at specifications for habitat selection, at the types/functions of hairs on the spiders’ legs, at the fact that urban spiders are larger than their rural relatives (the urban heat island effect), at the tensile strength of cocoon silk, and much more. Be sure to check the web diagrams in this study https://www.sciencealert.com/spider-on-drugs, in which researchers dosed Cross orbweavers with a variety of substances – LSD, caffeine, pot, mescaline/peyote, and a few more (with a link to a longer NY Times article).