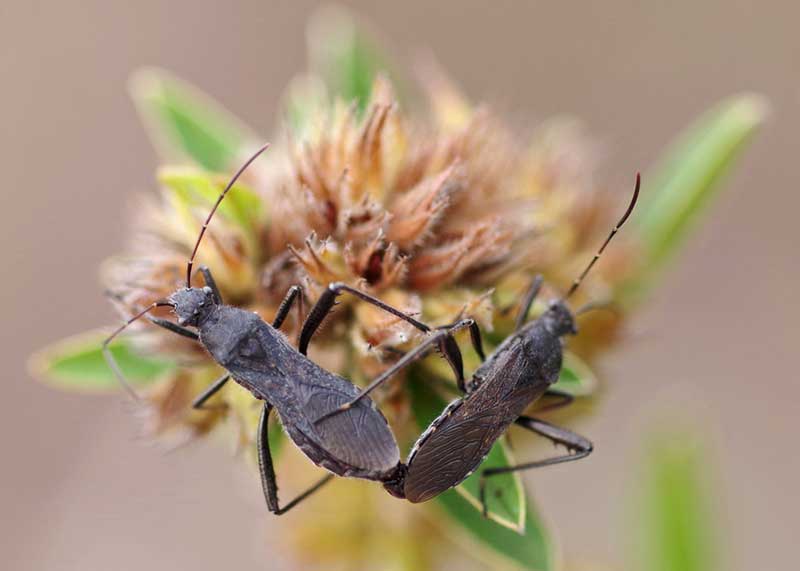 Years ago, while the BugLady was giving a program for a local Garden Club, she mentioned that she has a nice picture of a Zebra Swallowtail butterfly, but it’s sitting on dog poop, so she can’t show it in polite company. The club members assured her that she needn’t have worried—they were, after all, a Garden club. So, the BugLady suggests that you channel your inner Garden Club and remember, as the bumper sticker says, “’Excrement’ happens.” 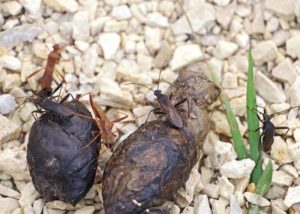 The BugLady always glances at animal droppings that she passes on the trails, and the other day, she saw something unusual. A carnivore had passed that way a few days earlier, and two species of Broad-headed bugs (family Alydidae) were feeding on what it had left behind.

Nota bene—in this episode the term “bug” is used accurately, referring to members of the Order Hemiptera.

We have met the Alydidae before, in the form of the Lupine bug. They’re called Broad-headed bugs because their head is wider than their pronotum, the shield that covers the first section of their thorax. It’s not a huge family, about 300 species worldwide, with most living in sandy areas, dry woods, grasslands, edges, and roadsides in the tropics and subtropics. 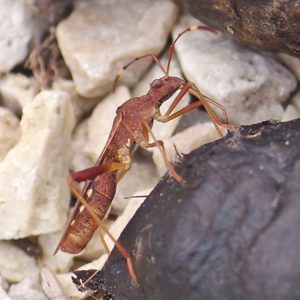 They are slender, up to a half-inch long, and generally dark-colored, and many have long legs. What the BugLady didn’t see, because their wings were folded, was the red-orange color on the top side of the abdomen that warns predators to reconsider. (You can barely see it here.) When alarmed, these bugs produce a nasty odor. Like all Hemipterans, they have piercing mouthparts and a forewing that is proximally leathery and distally membranous. The nymphs are ant-mimics (another common name is “ant bug”), so now the BugLady will have to check all the ants she sees on vegetation.

Broad-headed bugs are plant feeders that favor the seeds of legumes and grasses. They puncture the seed coating and suck out the juices, but some have been observed, says Bugguide.net, feeding “opportunistically on carrion and fecal matter.”

The two bugs that the BugLady saw have similar ranges (coast to coast in the US and southern Canada), seasons (adults are abroad from mid-summer into fall, eggs overwinter), habitats, and biographies. The black one is (probably) Alydus eurinus (no common name). Here’s its nymph.. It eats the young fruits and seeds of clovers, sweet clovers, soybeans, and a non-legume prairie plant called New Jersey tea, and sometimes it sips carrion. The bush clover (Lespedeza) along the trail was a popular meeting spot for this species.

The caramel-colored bug is a Lupine bug (Megalotomus quinquespinosus). It feeds on False indigo, locoweed, New Jersey tea, and lupine, has been seen on Smooth sumac, and in one report, on the carcass of a garter snake. Here’s its nymph.

Coprophagous insects (poop-eaters) are decomposers/recyclers. It’s a lifestyle for some species, but others, like these primarily-vegetarian Broad-headed bugs, just dabble in coprophagy. The BugLady frequently sees squash bug nymphs on leaves splattered with bird poop. (Here’s a Lupine bug on bird droppings.) The whitewash contains uric acid, and feeding on it, a form of coprophagy, provides innsects a vital source of nitrogen needed for growth. Apparently, a few species of plant bugs even live in bird nests, where they’re close to the source. Herbivores/grazers don’t have super-efficient digestive systems, so what comes out the rear end resembles, nutritionally, what went in the front end, and there’s a lot to glean from their droppings. Carnivores’ guts do better, but even their dung offers nutrients. 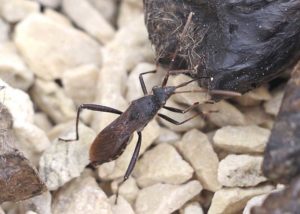 There are many species of coprophagous/scatophagous insects, but most of them are flies and beetles. Google “insects on dung” and you’ll get a zillion dung beetle hits. Lots of study exist of the benefits of dung beetles in pasture ecology, the bottom line being that the more dung beetles there are, the fewer flies there are to bother the dung-generating livestock.

But coprophagy is an uncommon proclivity in the Hemipterans. In a paper published in 1980, researcher Carl W. Schaefer said “I suspect that the bugs are attracted [to dung and carrion] both by water and by concentrated semiliquid protein, but there is no clear evidence that any of the alydines feed primarily on carrion.” The BugLady found a paper that described a (successful) attempt to trap a species of Broad-headed bug that is crop pest using dead fish as bait.

In the great scheme of things, insects that eat dung or carrion are considered scavengers (saprophages)—part of the clean-up crew. Scatophagous insects usually attend the droppings of larger vertebrates rather than those of their fellow invertebrates, undoubtedly harvesting the microorganisms present in the decomposing organic material, and many lay their eggs there so their offspring can enjoy the feast.

Coprophagy also refers to animals, both vertebrate and invertebrate, that eat their own droppings in order to claim the nutrients their guts missed on the first pass through, and to those offspring that eat the parental by-products so they can download important intestinal flora.

Of course, some insects hang out on dung and carrion to pick off other insects that are attracted to it, and then there are those for whom the smell may serve as an aggregation pheromone—in some studies, most of the insects that were thus attracted were males.

And FYI, feeding on carrion is necrophagy.