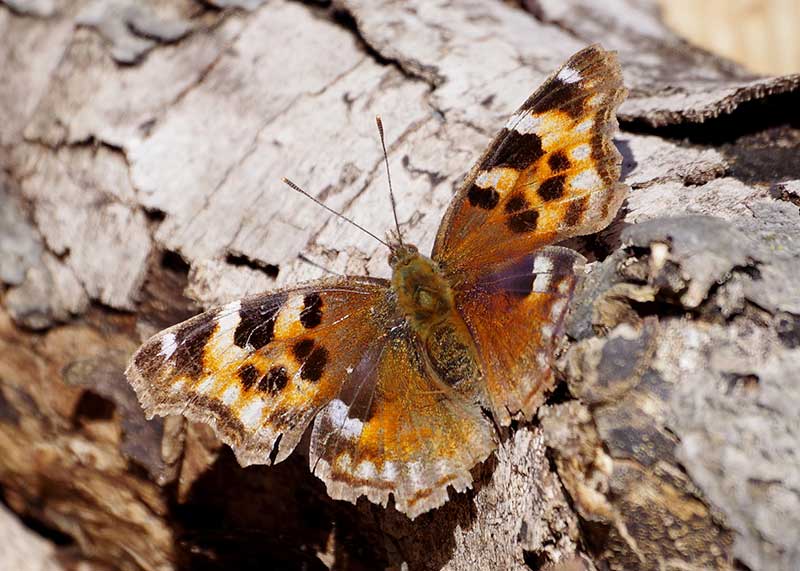 (Note: All links below are to external sites.)

This butterfly needs a better name!  (More about that, later) 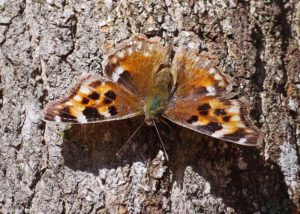 It’s a large (2 ½” to 3” wingspread), beautiful butterfly with a powerful flight. Like many Nymphalids, it’s patterned in orange, brown, and black (which accounts for the “tortoiseshell” part of its name) – perfect coloration for a butterfly that likes to sit on the ground.  When it folds its wings, it looks like tree bark. Because its wing edges are angled and notched, with short tails, and because it has a slim white slash on the underside of the hindwing (which can be hard to see), it’s sometimes mistaken for a Gray Comma, also in the Nymphalidae but in a different genus.

Although Compton Tortoiseshells have been found south of the Mason-Dixon Line (a few individuals have even made it to Florida), this is a butterfly with northern proclivities whose range also includes the temperate areas of Eurasia (it’s native to both continents). Look for it in open woodlands and edges and along trails.

Weber, in Butterflies of the North Woods, says that it is “subject to cyclical population explosions and possibly migration.” Commenting on its abundance in Massachusetts in the last two centuries, the excellent Butterflies of Massachusetts website says that “Collectors in the 19th and early 20th centuries were enamored of this large, colorful and unpredictable species, and the resulting numbers of museum specimens may give a misleading impression of its actual abundance during those years.” They also say that Compton Tortoiseshells “can migrate south in either spring or fall.” (https://www.butterfliesofmassachusetts.net/index.htm)

The Compton Tortoiseshell’s biography is similar to that of the Mourning Cloak.  There’s a single generation each year. Adults overwinter under eaves, in out-buildings, under bark, in tree holes and wood piles, etc. (even mailboxes!) – and a gang of tortoiseshells may go into winter diapause/hibernation together.

They mate in spring. Males watch for females from perches on trees. Females lay eggs in clumps on the newly-emerged leaves of willow, birch, and poplar. The spiny caterpillars hatch, spin a web and feed together inside it before forming a chrysalis.  Fresh, newly-minted adults fly in mid-summer, but then they may take a siesta until fall, when they appear again. By the next spring they are an amazing 10 months old and are looking tattered (but are game to produce the next generation).

How do they deal with the cool temperatures of fall and early spring? First of all, they’re pretty hairy, and second, they are “dorsal baskers” – they turn their back to the sun and open their wings, letting the sun’s energy heat their thorax, which warms the muscles used in flight. In winter, of course, a generous dose of home-made antifreeze protects their cells.

Like other early-emerging butterflies, they get nutrients from sap drips (including sapsucker holes), dung, damp soil, and rotten fruit. Adults also feed on willow nectar (the BugLady thanks pussy willows annually for their early and abundant flowers).

And now the nit-picking part of this narrative: This butterfly needs a better name!  The Compton Tortoiseshell was given its common name by an English naturalist who studied it while living in Compton, Quebec. The BugLady also found it referred to as the False Comma and the White J Butterfly. Some people add an “s” – Compton’s Tortoiseshell (your mind really wants that “s”), and the group is variously called the Tortoiseshells, Tortoise-shells, and Tortoise Shells.

And then there’s the scientific name – it’s listed in some references as Nymphalis l-album and in others as Nymphalis vau-album or vaualbum (vau is Latin for “V,” and album means white”). Apparently, when Austrian Ignaz Schiffermuller described and named the European branch of the species Nymphalis vau-album in 1775, he failed to dot all the scientific “i’s”, so the name is not considered legitimate by some – science can be cut-throat. And then you get into subspecies – the subspecies seen in eastern North America is named Nymphalis vau-album j-album, and The Butterflies of Canada says that “The western records have been treated as subspecies watsoni, but the differences are minute and this subspecies is not currently recognized.”

While the BugLady was researching this butterfly she found this website. If you know what Wisconsin butterfly you’re looking at, this website will show you the caterpillar.

(And, on another note, it’s National Amphibian Week and Teacher Appreciation Week, and it’s the start of American Wetlands Month. Celebrate accordingly.)