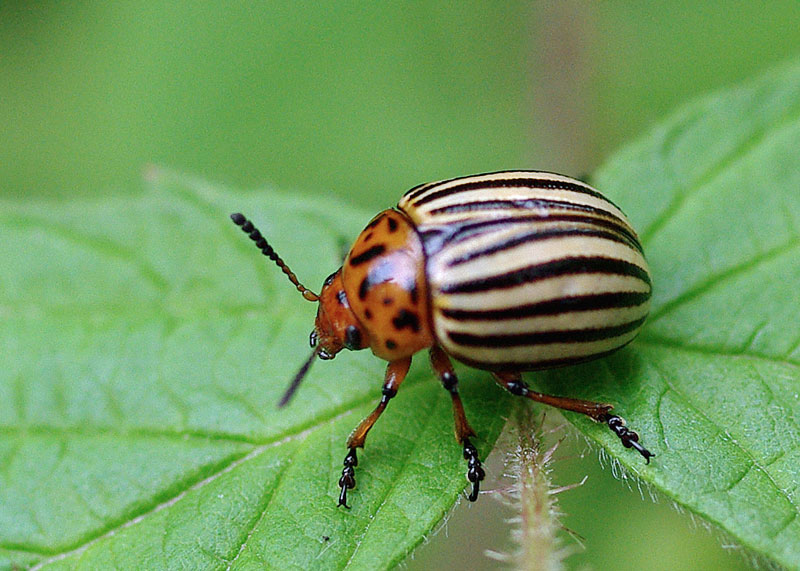 Between Christmas and New Year’s Day, it’s all reruns. Please enjoy this slightly updated episode about a pretty little garden scourge, along with a year-end sermonette.

This is the story of The Little Beetle That Could, of a half-inch beetle that’s much too good at what it does. So good, in fact, that it’s on Cooperative Extension Most Wanted Posters across the US, and its emigration to foreign countries was no cause for celebration (but it did inspire some great postage stamps and educational/propaganda posters – scroll through).

One source says that the Colorado potato beetle (aka the Potato bug) (Leptinotarsa decemlineata—“ten lines”) is among the 10 insects that everyone should know.  Gardeners from California through Central America to Florida to Nova Scotia to British Columbia certainly know it – it’s said to make itself at home in more than three million square miles of North America (that’s about one-third of the land mass) and close to 2.5 million square miles  of Europe and Asia.

“The Colorado Potato beetle’s is an amazing story of a home-grown pest.  A native leaf beetle, its “pre-settlement” range was restricted to the Upper Missouri River Basin (alternate sources place its origins in the Rocky Mountains and/or south of the Rio Grande), where it fed unobtrusively on a few members of the Potato family like buffalo bur, ground cherry, and nightshade, in harmony with its environment.  Wherever it started, it was enough of a presence in Colorado by the mid-1860’s that the state’s name was attached to it.  When the settlers pushed West, bringing their kitchen gardens, they planted “Irish potatoes” (potatoes are native to the Andes and had been brought to the Old World a few centuries earlier, had conquered Europe, had come back across the Atlantic to New England in the 1700’s, and then headed West by wagon train). The CPB adopted potatoes, and with its food source increasing logarithmically, it left the Plains and headed East in 1854, hop-scotching from garden plot to garden plot and arriving on the Atlantic shore twenty years later, a “reverse pioneer.” That CPB’s had quietly switched their main host plant to potatoes was noticed when the first CPB outbreak occurred in 1859, about 100 miles west of Omaha. 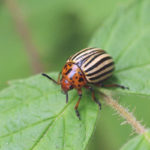 No BOTW is complete without a vocabulary challenge – the humpbacked CPB larvae/grubs are cyphosomatic – their dorsal and ventral surfaces are decidedly not parallel.

CPBs are in “survival mode” 24/7. They lay a lot of eggs on the undersides of potato leaves (as many as 800 in a lifetime), and multiple encounters with multiple partners result in lots of genetic diversity. They grow fast, have several generations per year, and overwinter in the soil as adults so they can come out swinging when the sun warms the earth in spring. Adults, including gravid females, may move from field to field, so all of their eggs are not in the same basket. Add to these external/behavioral attributes the CPBs’ enviable ability to develop an inheritable resistance to almost any of the chemicals we’ve thrown at them (possibly because they’ve “practiced” by rendering harmless the naturally occurring toxic glycoalkaloids of their host plants), and you’ve truly got a force to be reckoned with.

CPBs and their eggs and larvae have a number of natural predators including some species of ladybugs, stinkbugs, and ground beetles, and CPB larvae that hatch first may cannibalize the nearby unhatched eggs of their siblings. Home and organic gardeners can control them by hand-picking the adults, larvae, and eggs, by mulching or row covering, and by removing related weeds that feed spring adults, but our reactions to their presence have typically been chemical.

The BugLady doesn’t work for Cooperative Extension (any more) and she tries not to get embroiled in debates about pest control measures, but she’s weighing in on this one. In a nutshell, the BugLady doesn’t like “collateral damage.” The neonicotinoid insecticides (nicotine-like neurotoxins) that have been successful against CPBs and other agricultural pests since the mid-‘90’s (some CPBs, though, are beginning to show resistance to “neo-nics”). Neonicotinoids have been implicated in Colony Collapse Disorder in bees – the chemicals spread throughout the treated plants, appearing in pollen and other plant parts, and they are transported back to the hive. They disturb the central nervous system, disorienting homeward bound bees.

They also make bees (wild and domestic, solitary and colonial) more susceptible to lethal fungal and viral infections, and less dramatically, it was recently discovered that exposure to “neo-nics” causes an “insomnia” in honeybees that simply causes them to run out of steam due to sleep loss. Thirty-five per cent of agricultural crops rely on pollinators, honey bees and native bees alike. This group of pesticides is also bad for butterfly caterpillars, including Monarchs, and for a variety of native pollinators.

No one can blame farmers for wanting a single product that is effective across the board, and heaven knows we all want to be able to afford to eat, but the complete answer to “How much does it cost?” may take years to calculate. This is not Either-Or; not Potatoes vs. Butterflies. Bees are one of the canaries in our mineshaft.  Generalized pesticides kill indiscriminately, randomly lopping off strands of food webs, and that is fundamentally unsustainable. The result will be an oversimplified world where imbalances favor outbreaks of the pests whose predators perished in the chemical or bacterial barrage, and who then require more chemicals. And then there’s the domino effect, in which fewer insects means fewer insect-eaters, including birds, bats, spiders, and the BugLady’s beloved dragonflies and more. A very different world.

The real questions are “Why would we think that we can eliminate organisms, disrupt eons-old connections, and lower biodiversity, and still expect the subtle systems that keep us alive and healthy to keep functioning?”  What can we do about it?

If you shake the tree of BugFans, an awful lot of scientists and educators would fall out. So, folks, how about it?  In an era where people have drifted pretty far from the natural world, how do we bridge this “disconnect” between our actions and their ecological effects? How do we educate people about keeping our life-support healthy?

Meanwhile, do you want fries with that?