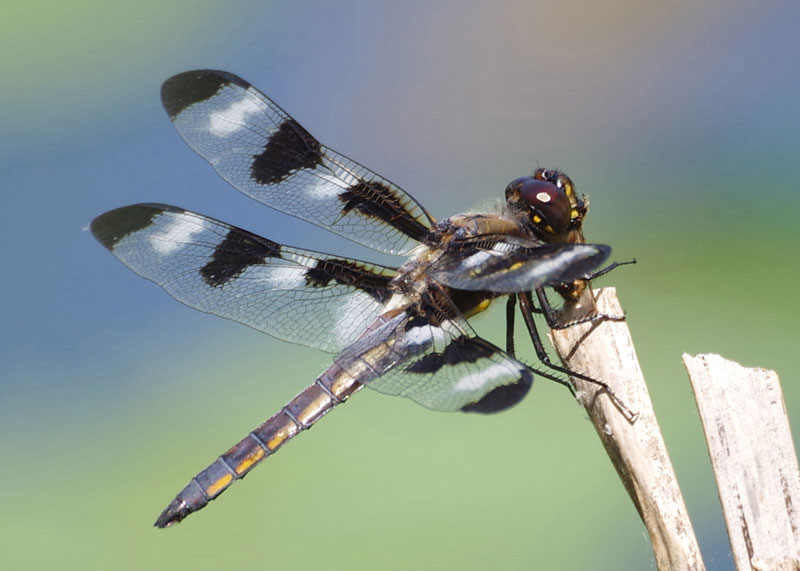 This episode originally appeared in 2011 under the title of “Confusing Summer Dragonflies.” They are confusing in that they all have dark patches on their wings – interspersed with white patches in mature males but not in juvenile males. The word “pruinose” rears its head again, as the abdomens of males of today’s dragonflies develop some degree of “hoariness,” due to the production of waxy scales, as they age. 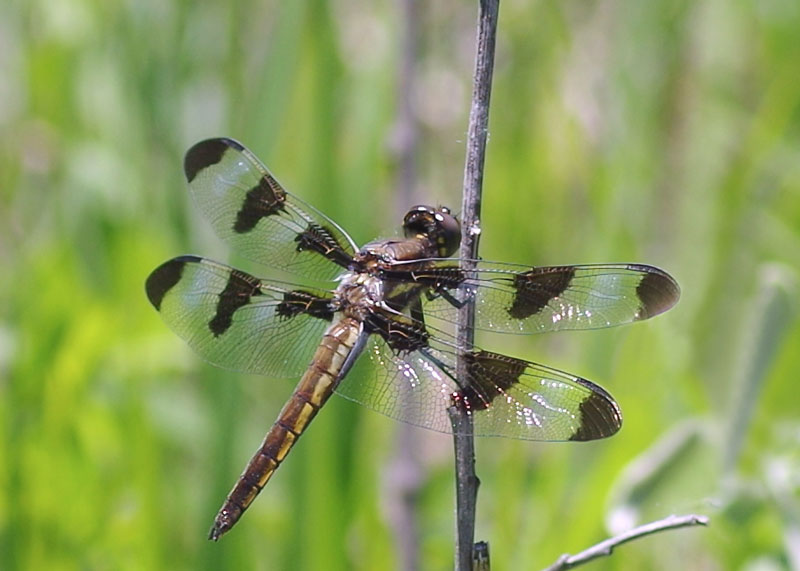 Represented by 103 species in North America, the Skimmer family (Libellulidae) contains our most common and conspicuous dragonflies – Pennants, Meadowhawks, Gliders, Corporals, Pondhawks, Whitefaces, Saddlebags, Skimmers and the like. According to Sydney Dunkle in Dragonflies through Binoculars, they are colorful but not metallic, often have patterned wings, and their eyes contact each other at the top of their head. Skimmers are often sexually dimorphic, with colorful males and not-so-colorful females. 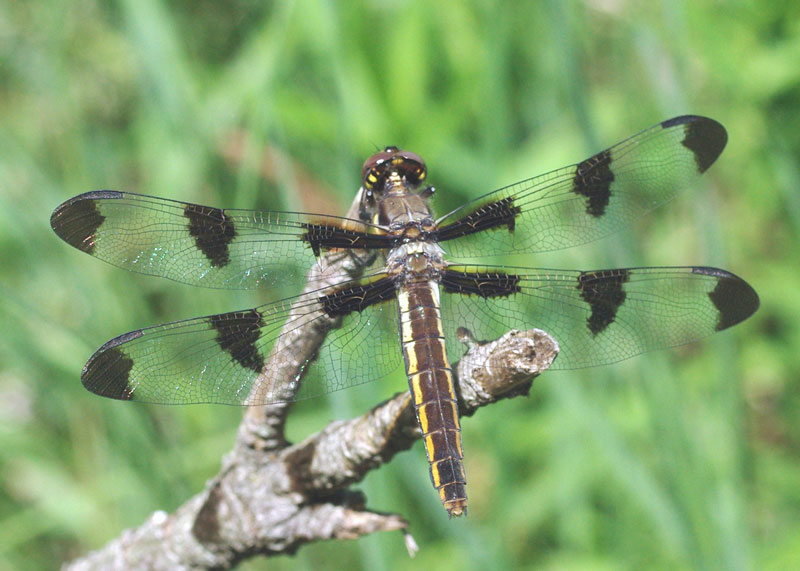 A female Skimmer doesn’t have an ovipositor like females of other dragonfly groups so instead of “inserting” her eggs into the water, she jolts them from her abdomen by smacking its tip on the water’s surface above submerged vegetation. Males generally “hover-guard” while their ladies are thus engaged, preventing them from being shanghaied by rival males. Widow skimmers, Whitetails and Twelve-spots prefer shallow ponds and lakes, and very slow streams with lots of organic muck on the bottom. Submerged aquatic plants are great, but they don’t care for floating duckweed leaves that coat the water. They are effective predators of mosquitoes and other aerial insects.

Today we take to the air with three big dragonflies that belong to a group called the “King Skimmers” – the genus Libellula. Four-spotted and Slaty Skimmers are also in the genus, and Chalk-fronted Corporals (Ladona julia) are sometimes included in the group. Dunkle calls the King Skimmers “the quintessential dragonflies” – strong fliers, feisty, territorial, stout-bodied. Compared to the damselflies, these are giants; a few damselflies could easily sit on each of their wings. All have dark eyes; the males are pretty distinctive, but the females can be a bit confusing.

As with most dragonflies, the information sites on the internet are logarithmically outnumbered by the zillions of photography sites that feature the work of happy dragonfly stalkers, and there is a lot of dragonfly merchandise available on the web.

TWELVE-SPOTTED SKIMMERS (Libelula pulchella) are the largest of the three (pulchella means “little beauty” but their body is about 2” long and their wingspread is 3”). Males, females and juveniles all have 12 dark spots on their wings, and mature males add white spots between the dark (a correspondent of the BugLady’s says they look like checkered flags). They used to be called Ten-spotted Skimmers by people who were counting the light spots instead of the dark ones, but that name didn’t describe the female. The wing spots of female Twelve-spots are similar to those of female Common Whitetails, and they both also have dark abdomens, but if you can get one to sit still, you’ll see a “solid” light/yellow stripe” along each side of the Twelve-spot’s abdomen.

The BugLady frequently sees them perched on last year’s weed stalks in her grassy field, far from the waterfront properties where they woo and win female Twelve-spots. When they’re chilly, they face into the sun and raise their abdomens, to maximize exposure.

Males characteristically fly, stop and hover, and then chase off in a different direction, and when disturbed, they will often return to the same sentinel post. They patrol a territory, chasing off dragonflies of all species and psyching out other Twelve-spot males by executing vertical loop-the-loops around them. Some of the Atlantic Coast Twelve-spots migrate in fall.

COMMON WHITETAILS (Libellula (sometimes Plathemis) lydia) are the flashiest of the three. They’re just under 2” long and a little chunky-looking, and the male’s spectacular pruinose, white abdomen (powder blue in younger males) contrasts with his large dark wing spots (just one on each mid-wing). Females can be distinguished from female Twelve-spots by a white/light line along each side of the abdomen that is broken/zig-zag, not continuous, and the edges of her dark wing spots are more jagged, too. Juvenile males’ bodies are marked like females, but as they age, the pruinosity covers the abdominal markings. 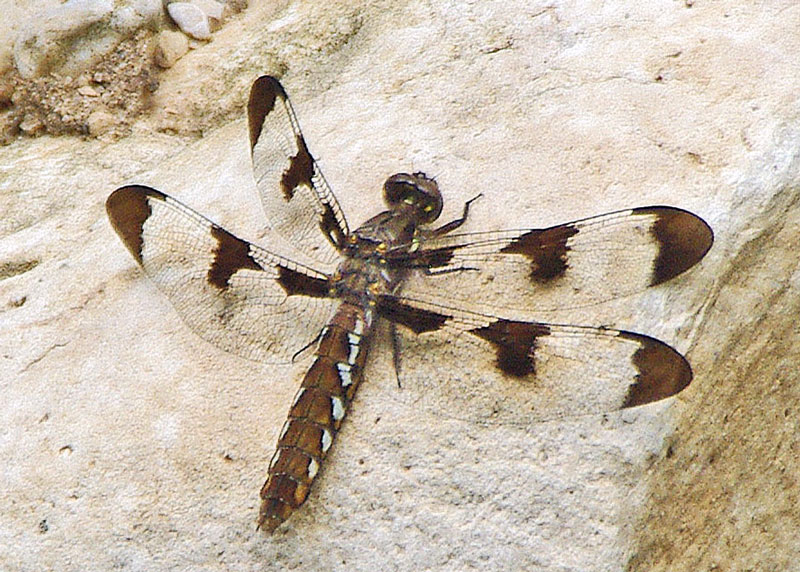 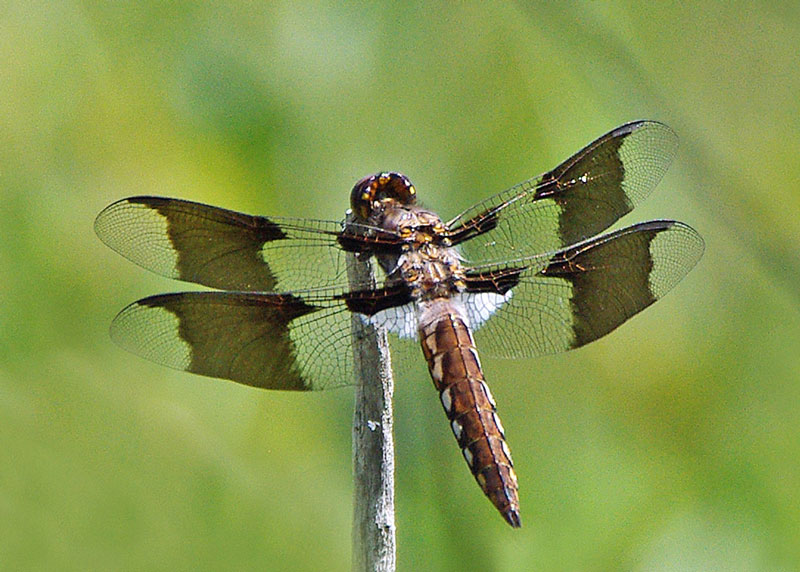 Dunkle says that adults are attracted to the dark of mud, where they often perch (of the three, they are most often found on the ground), and they often sun themselves on rocks. They are most uncooperative, jumpy photographic subjects. Males fiercely defend a territory about 12 yards long over open water and pond edges. Dominant males display their bright tails; submissive males lower theirs. Females lay their eggs in the shallows where there is a lot of submerged vegetation (the habitat their naiads prefer), and the naiads are tolerant of low dissolved oxygen in the water. If she wants to lay eggs on his prime real estate (up to 1000 eggs in a sitting, repeated every other day), she must mate with the owner. According to Legler in his wonderful Dragonflies of Wisconsin, a naiad that is ready to transform into an adult may crawl as far as 150’ from its watery home before emerging. 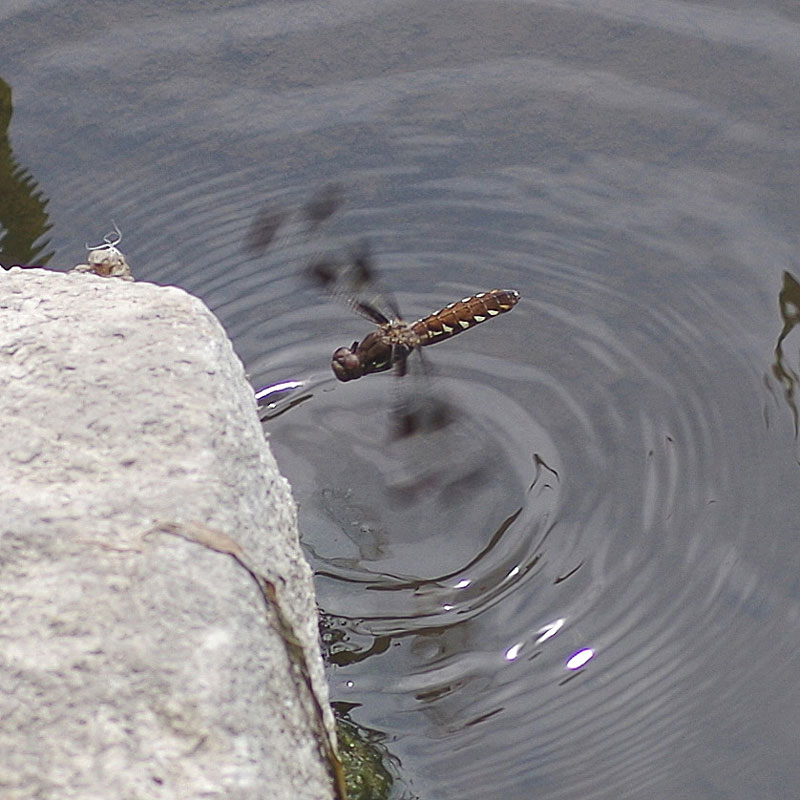 The exquisite WIDOW SKIMMER (Libellula luctuosa) is the BugLady’s favorite of the three. Widows are so named because they oviposit without the protection of their mates (one source reports that luctuosa means sorrowful and compares their wing color to mourning crepe). They perch down in the tall grasses and fly up unexpectedly as the BugLady explores, spotting her long before she spots them. 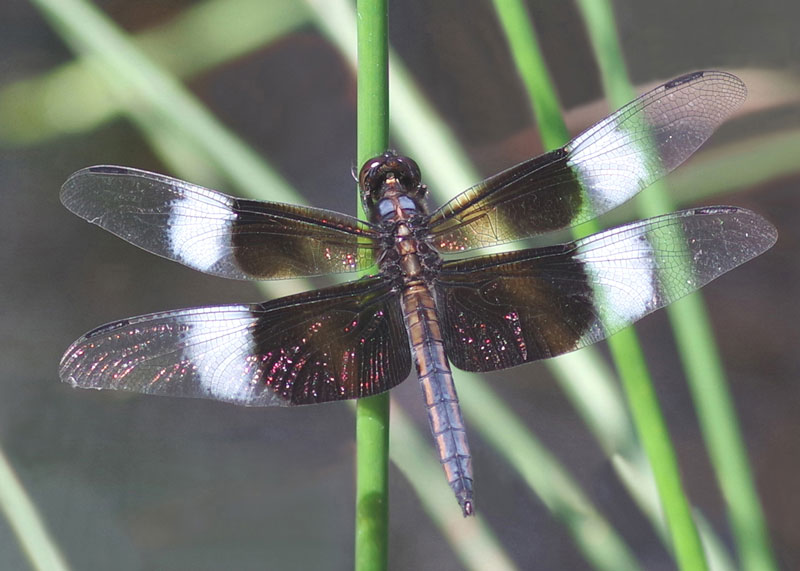 They’re just a bit bigger than Common Whitetails but, to the BugLady’s eye, they look sleeker. In both sexes, the base of the wing is brown (in the Common Whitetail, the dark patch is toward the middle). Males have big bluish-white spots next to the brown, fading to clear-ish patches at the wing tips and may have a blue tinge/pruinosity on the abdomen. The center of the female’s abdomen is a black stripe, bordered on each side by broad, gold stripes that merge at the thorax like an inverted V. Juveniles start out looking like females, and the juvenile male’s abdomen gradually changes color. 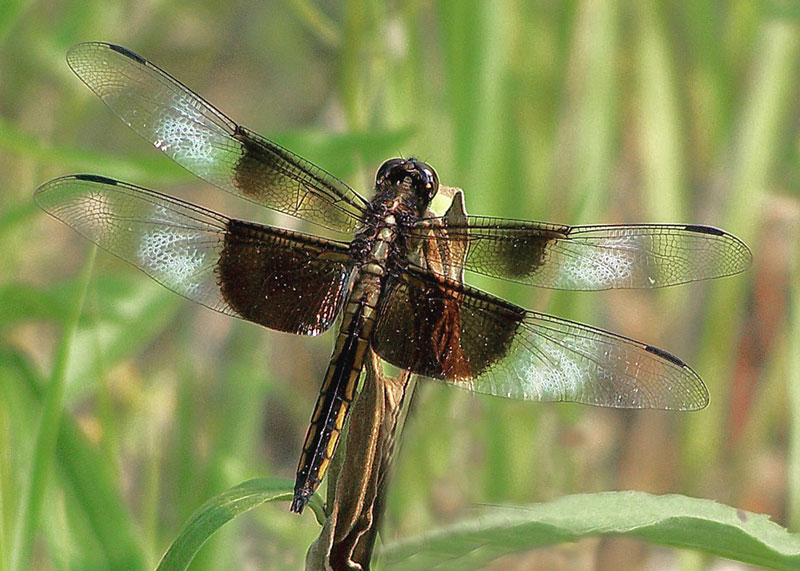 When there aren’t many Widows around, males each defend their own territories (up to 250 square yards), but the territories move daily. Defense of their home turf can be a contact sport. With overcrowding, a dominant male emerges and he gets all the ladies. In dense populations, the male will guard his female as she lays eggs; if she gets raided by an intruder, he will discard his rival’s reproductive material and replace it with his own. 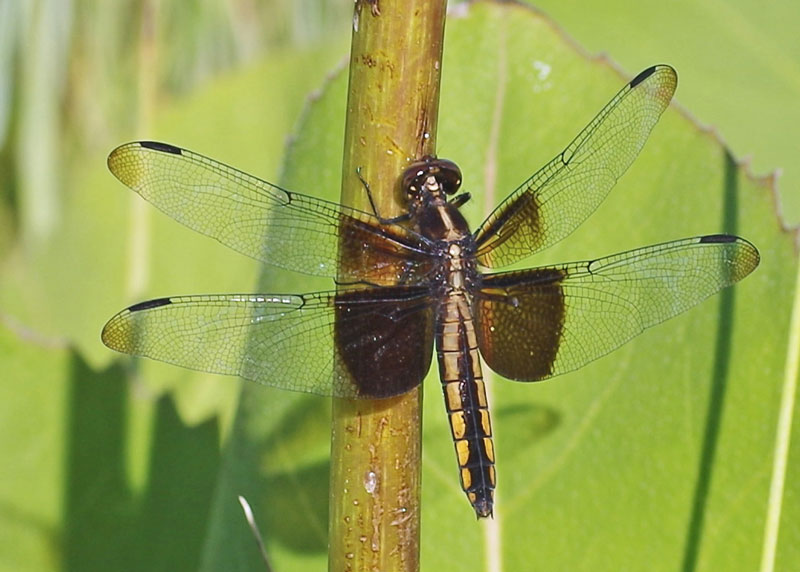 Besides the Legler and Dunkle books, the BugLady recommends Dragonflies of the North Woods by Kurt Mead, Dragonflies and Damselflies of the East, by Paulson, and the Stokes Beginner’s Guide to Dragonflies.

Black fly - The Bug. The Legend.