It looks like fun to be a bumblebee, and the BugLady can hardly pass one by without taking its picture. A BOTW in 2008 covered the lifestyle of bumblebees, and another in 2009 showed bumblebees negotiating Bottled gentian flowers. BugFan Andy, who is also a bumblebee fan, wrote and suggested an update.

Here are some Fun Facts about Bumblebees:

But, as Joni Mitchell used to sing, “Don’t it always seem to go, that you don’t know what you’ve got till it’s gone.” There are some Not-So-Fun Facts about bumblebees, too. 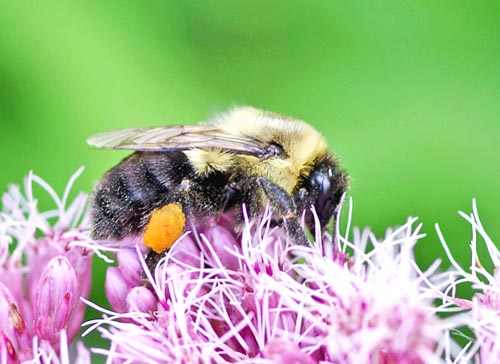 Can we help BBs and other native bees? We certainly can.

We can census them by participating in Citizen Science efforts like the Great Sunflower Project’s Backyard Bee Count and by checking pollintor conservation to see if they have other surveys in the area.

We can plant clumps of bee-friendly, native plants that have different heights, shapes, colors and blooming seasons. Plant enough, and you’ve created a habitat, and butterflies and birds will be happy, too.

Many native bees nest in the ground or in dead trees. Can you spare a patch of lawn? Rototill or spade up a small area on the lawn’s edge and see what comes in. Leave a dead tree standing.

See Bumblebee Guide to try your hand at BB Identification. The BugLady’s BB IDs are tentative (but she’s blown away by the big Black and Gold BBs (maybe) with the crew cuts).

For more information about bees: Bee Basics—An Introduction to Our Native Bees. 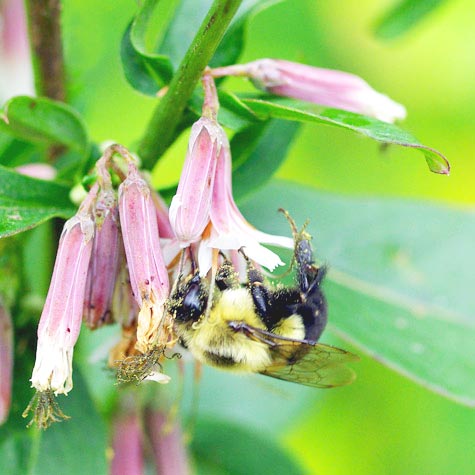 The BugLady wishes that she had a dollar for every bumblebee she saw on wildflowers in southeast Wisconsin in 2013, but BugFans Tom and Joe reported a scary lack of bumblebees and other hymenopteran pollinators last summer at their locations south of the Mason Dixon line. Imagine goldenrods empty of bumblebees and windfall apples with no yellowjackets on them.