Here’s the “take-home”—when you meet a critter with a name like Gasteruption, you just have to stop what you’re doing and embrace the Gasteruption experience.

First, the name. Gasteruption is a genus in the family Gasteruptiidae (of course), the Carrot Wasp family—so-called because the adults are usually found eating nectar and pollen on flowers in the carrot family (including Wild Parsnip). “Gaster” is an anatomical term referring to the wider/inflated, distal segments of a wasp’s abdomen, the puffy part behind the “petiole” or pinched-in “waist” of the wasp. The BugLady is only guessing about the “uption” part, here; the root word for the second syllable of “interruption” is “rumpere”, from the Latin for “to break.” Is that a reference to the arched gaster set high up on the wasp’s thorax? Maybe yes, maybe no.

Second, the experience. The BugLady was moseying around in her favorite wetland the other day, checking the flower tops, looking for bugs to photograph. Oh, the Water Parsnip and Joe Pye Weed did hold some insects (mainly bumblebees and ambush bugs), but two particular clumps of Water Parsnip, six feet away from each other, absolutely hummed with Hymenopterans like cuckoo wasps, sweat bees, yellow jackets, and ants—and Carrot Wasps (though their voices must be pretty soft). The BugLady decided to try for more pictures the next day, and in a 1 ¼ mile hike through likely habitat at two different sites, found them only when she returned to those original plants.

These are seriously small insects—not super short, but oh-so-thin. Each of the little bunches of flowers on the Water Parsnip’s umbel is smaller than a 25 cent piece; the CWs look like mini sewing needles approaching the plant (they often fly in and land on the side of the umbel and then climb up and over, onto its top). The long, arched abdomen is similar to that of an Ichneumon wasp, but a CW also has a noticeable neck, and the tibias on its back legs are enlarged. There are 15 species in the genus in North America, five of those in the east, and they look pretty much alike—mostly black with varying orange bands on the gaster. While the females of some species have ovipositors that are as long as their body, three of our species have a short ovipositor and one of those is southern This CW is either Gasteruption kirbii or G. assectator (which also occurs in Europe). These are not stingers and they are harmless.

CWs range over the U.S. and into Canada. Look for them on flower tops in grasslands and gardens (and wetlands, it seems) throughout late spring and summer. They can also be found casing out the brood cells of solitary wasps and bees that nest in wood (remember—most bees and wasps are solitary, not social). 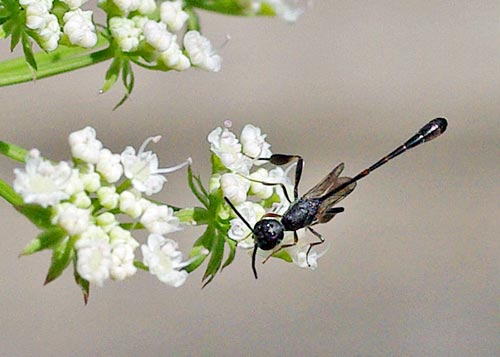 Adult CWs may be vegetarians, but their young are not.

When she finds a bee/wasp nest, a female CW checks it with her antennae, “feeling” for the activity of a wasp/bee larva within its cell. Satisfied, she inserts her ovipositor into the cell and lays an egg. BugFans can find a Youtube video of a female Gasteruption wasp trying to puncture the sealant that one kind of plasterer bee spreads over her nest’s opening.

Her egg is placed, depending on the CW species, near or on the host’s egg, or on the supply of food provided by the bee for its offspring, or on the wall of the cell. The wasp larva is an inquiline in the nest—a boarder—and a predatory guest at that. Some CW larvae eat the food cache that was meant for the original inhabitant; some eat/parasitize the wasp/bee larva, and some do both. They’ve been recorded in the nests of digger bees, plasterer bees, leaf-cutter bees, mud daubers, and pollen wasps. CWs overwinter as larvae and pupate in spring ; not a lot is known about their pupation, but the pupal stage is probably passed within the bee/wasp nest. CWs would have potential as biological control agents except that they also parasitize native pollinators.