Where were we? Oh, yes—exploring the magic of camouflage. Crypsis (of previous BOTW fame) involves melting into the background; the receiver of the signal—the predator—can’t reliably pick its prey out from the background. Mimicry is about being a copycat; imitation may be the sincerest form of flattery, but this is about survival. In mimicry, the predator sees something that it misidentifies. An organism copies the appearance of another organism, and maybe its behavior, sound or smell, as well. According to Wikipedia, mimicry is “the similarity of one species to another which protects one or both.” Insects make up a large percentage of organisms that practice the various arts of camouflage. 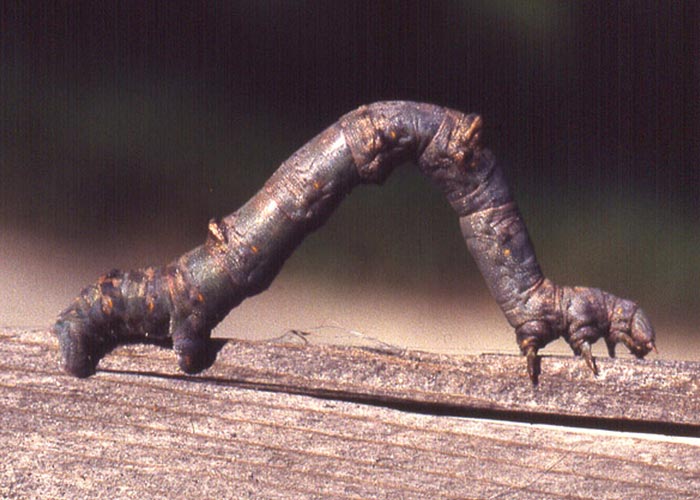 In most cases of mimicry, Species B is saved from predators because of its resemblance to some other potential prey (Species A) that their mutual predator avoids, or because of scary-looking markings that make the predator think twice. In Mimesis (a transitional area between mimicry and crypsis), the mimic looks like something that the predator has no interest in. Since bloodthirsty predators don’t look twice at plant parts, why not look “plant-ish” and hide in plain sight like twig-imitating caterpillars, leaf-mimic planthoppers, and thorn-like treehoppers (even on plants that don’t grow thorns)?

Defensive/Protective Mimicry: Something that is harmless sends out the same signals as something that is harmful (a sheep in wolf’s clothing). In Batesian mimicry, named after English scientist Henry Walter Bates, an animal protects itself by cashing in on another animal’s defense system. Stinging and toxic species wear bright (aposematic) colors that forewarn predators, and their copycats mimic that coloration. Harmless flower flies and a number of long-horned beetles wear the yellow and black of wasps and bees; box elder bugs are said to mimic milkweed bugs.

The monarch-viceroy story has long been held up as the poster child for Batesian mimicry. Birds shy away from monarch caterpillars and butterflies because they are poisonous, so imitating a monarch is a good thing, and the (allegedly wholesome) viceroy makes a grand job of it. But lately, scientists have theorized that viceroys don’t taste so good either. Their caterpillars eat willow leaves, which can be very bitter, so this is probably Müllerian mimicry (named after German naturalist Fritz Müller, in which two critters, possibly at different points on the noxiousness continuum, imitate each other. Both species benefit by the reinforcement that a larger pool of “teachers” provides.

Aggressive Mimicry: Something that is harmful sends out the same signals as something that is harmless. Some robber flies are bumblebee mimics (we don’t mess with bumblebees, but they are considered a harmless presence by other insects of the flower tops). Fireflies have species-specific light signals that allow flying males and earthbound females to find each other. After a successful liaison, female lightning beetles in the genus Photinus will “change their tune,” altering their Morse code to that of another species. When an optimistic male approaches with romance on his mind, she will eat him—a protein shake for an expectant Mom.

Automimicry: The animal imitates a part of its own body. The tails of hairstreak and swallowtail butterflies are said to mimic antennae, fooling predators into grabbing the wrong (and more expendable) part of the butterfly. Eyespots may serve the same function, misdirecting a predator that’s aiming at its head; and they may also scare would-be predators by making them think they’ve tangled with a much larger beast. Monarch caterpillars practice a form of automimicry. Not all species of milkweed are equally poisonous, and caterpillars that feed on the different species of milkweed vary in their toxicity. The caterpillars advertise their noxiousness with their bright colors, and birds avoid them, one and all; the less toxic larvae are protected by the reputation of the more toxic larvae.

Does it work? Not 100%—if it did, we’d be hip-deep in insects. Songbirds eat walking sticks and black swallowtail caterpillars; aquatic predators gulp phantom midge larvae; kestrels pounce on locusts. And, of course, in order to find out that eating monarch caterpillars makes you sick, you have to eat a monarch caterpillar. There’s an old saying that covers it—“Nature is careful of the species but careless of the individual.”

And, for all the energy Mother Nature puts into camouflage, many insects don’t bother with it. Why?

By the way—plants mimic, too. Orchids, especially, are great tricksters.