“What’s in a name? A rose by any other name would smell as sweet.” What indeed? The BugLady will get back to that.

Caddisflies, in the order Trichoptera (hairy wings), are famous for the cases built for protection by their soft-bodied larvae (the only natural “armor” they possess is located on their head, thorax and legs) and for the larvae’s ability to produce silk thread via a silk gland in their lower lip. They use silk to “glue” materials together to construct the case, to net some food, and to modify the case before they pupate. 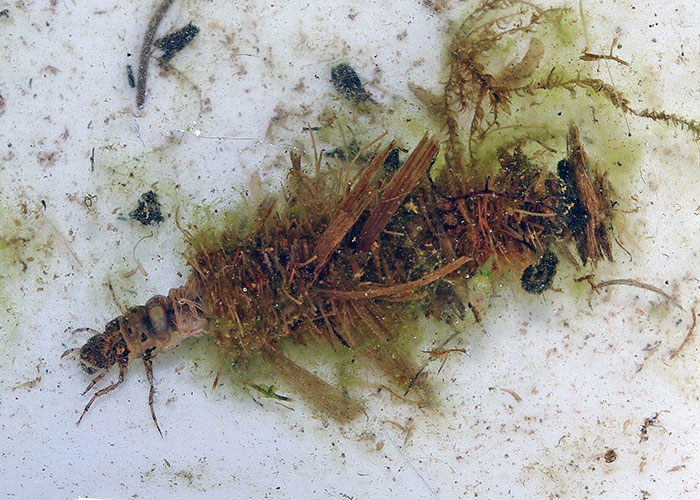 Caddisfly larvae live in water, both running and still; in fact, according to Elsie Klots in The New Fieldbook of Freshwater Life, they are one of four orders of insects that “have become almost wholly aquatic during their immature life” (a European species lives in wet moss). Many of the pond dwellers cut and assemble small vegetation-bits into portable homes. Some “homes” are thin tubes, some get glued together “the long way,” and some resemble Lincoln-log-like chimneys made of mini-twigs custom-trimmed by the larvae. In streams or rivers, where staying in place is a challenge, the larvae use heavier building materials like tiny pieces of gravel, or they spin a net that they glue onto a rock or into a crevice. Unlike turtles, whose shell and body are joined, caddisflies can leave their case of sticks or stones. Naked—deprived of their homes—they look like little wet caterpillars (to whom they are not-so-distantly related). 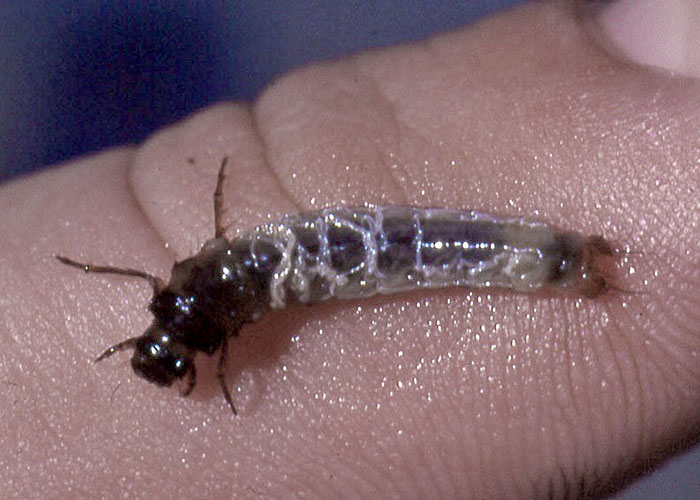 North America boasts around 1,400 species of Tri-cops (as they are known familiarly), and not surprisingly for such a large group, their larvae indulge in a wide variety of feeding methods. There are predators and there are “shredders” (performing the valuable service of turning big pieces of vegetation into little ones and thereby setting the table for even smaller organisms). Some net-spinners are “collectors” that let the current deliver their meals “carry-out,” (some net-spinners can produce a sound by rubbing a front leg against the underside of their head). Finally, there are “scrapers,” grazing on tiny organic particles stuck to underwater surfaces. As adults, with mouthparts that are described as “spongelike,” they ingest only liquids. 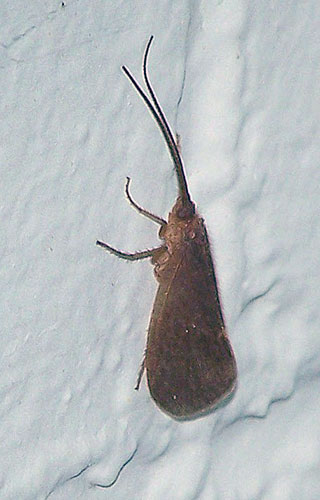 Adult caddisflies (a.k.a. Fish Food) resemble very long-antennaed moths; they tent their wings above their abdomens (making them look triangular from the rear), and their wings are covered with tiny hairs. Females of some species actually climb under water to lay their eggs, protected from getting soaked by a thin layer of air trapped in that dense covering of hairs. According to Eaton and Kaufman in the Field Guide to Insects of North America, fly-tiers (or tie-flyers) work hard to replicate caddisflies with their lures. Exceptionally sensitive to pollution, their presence signals good water quality. And, with a little luck, trout.

Once, after the BugLady gave a presentation about Pond Life to third graders, a child asked where the caddisfly got its name. The BugLady did not know (but loves to research the etymology of entomology) and promised to find out, and here is what she discovered: Back in the days of the first Queen Elizabeth (when Romeo and Juliet were obsessing about names), itinerant peddlers roamed the world. Those who sold ribbons, threads and yarns were called “Cadice-men” after “cadaz/caddis/caddice,” words that had come to refer to worsted yarn. Cadice-men displayed their wares by attaching samples of threads and yarns to their coats. In his wonderful A Guide to Common Freshwater Invertebrates of North America, J. Reese Voshell, Jr. says that the larva’s ability to glue pieces of material together to make its case was reminiscent of how a Cadice-man covered his jacket with pieces of textile. Was the person who named caddisflies, like the BugLady, a bug-loving history-geek?