The BugLady had a wonderful Beetle Experience the other day. She was at Riveredge Nature Center, attempting to photograph some butterflies (a Common Wood Nymph and a few Viceroys) on a large cup-plant that had bloomed and was forming seeds when she noticed some drab, half-inch, hairy bees sitting on/in the flower heads. When she took a closer look (and some pictures, of course), she discovered that they were a flower scarab called the Bumble Flower Beetle.

(Blogger Dragonfly Woman got pretty excited, too, when she saw her first one: It wasn’t a bee at all, but Euphoria, a fantastic scarab beetle! It tried to fly away when I picked it up, making a loud buzzing reminiscent of its namesake as it attempted to escape, but I snatched it out of the air and slipped it into my lunch bag to take it home to photograph. https://thedragonflywoman.com/2013/04/12/views-of-euphoria/.)

Flower scarabs are in the beetle family Scarabaeidae and the subfamily Cetoniinae. As a group, the 4,000 or so flower scarabs/flower chafers are diurnal as adults, feeding on pollen and nectar (and providing pollination services while they’re at it), or on sap drips on injured plants, or on plant tissue, including fruit. Their larvae are recyclers, mostly eating decaying vegetable material. 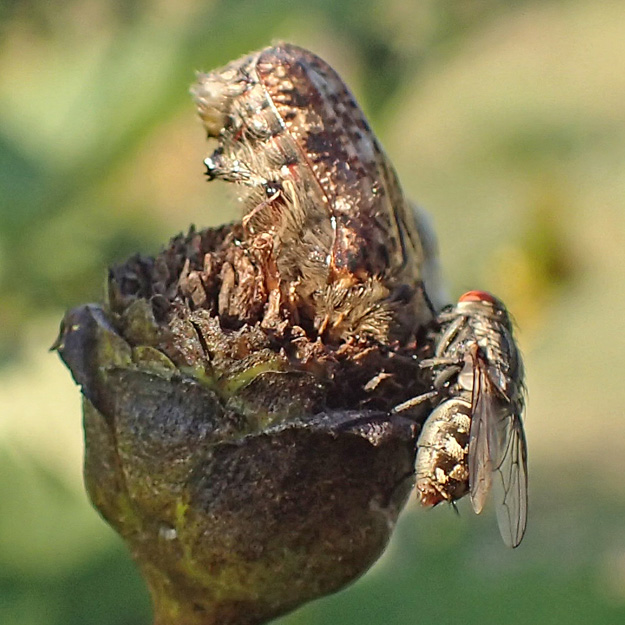 The larvae of some species in the subfamily grow up in ant hills, consuming the ants’ food stores while the ants inexplicably ignore them. Adult beetles may live there, too, secreting a sweet liquid for the ants to eat while the beetles eat larval ants (fascinating back story – some adult beetles are “killed” by ants (they play dead) and are carried down into the nest). A California species of Euphoria lives on the midden heaps in pack rat burrows. Check this out for an account of the lifestyle of a related beetle.

Some genus members run afoul of agriculturalists and are well-known to University Extension entomologists across their range, but a few may be taking the rap for other insects.

Anyway, the excellently-named Bumble Flower Beetle (Euphoria inda), also called the Brown Fruit Chafer and the Indian Cetonia, is one of 24 Euphorias in North America. Here’s a glamour shot. Its name comes from both its appearance and its behavior. The beetles happily congregate, and they may fly around near the ground like bees. While most beetles fly with their elytra (the hardened, protective front set of wings) extended, the chafers fly with elytra closed, producing a buzzy sound). It’s speculated that the two-winged mode may allow more agile flight.

Bumble flower beetles can be found in grasslands and gardens across the continent, feeding on fermenting sap, ripe/rotting fruit, flowers, pollen and nectar. It’s believed that they take advantage of already-existing cracks and splits in fruits and of damage done by other insects and that they don’t spread plant diseases while feeding. 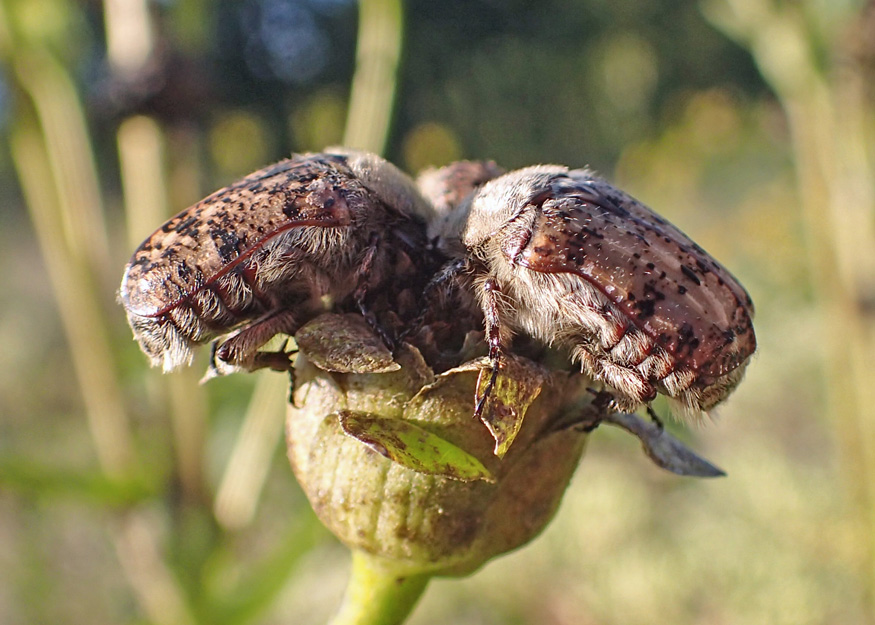 They are sometimes listed as minor corn pests. Said F. M. Webster in his “Insects Affecting the Corn Crop” in the 1886 report of the Indiana Board of Agriculture,

The adult beetle has been accused of feeding upon the kernels of young corn in the fields, and Dr. Harris states that they sometimes feed upon the sap of the stalks in September. Its depredations have so far been of minor importance, and, in fact, it is not altogether clear that the insect is guilty of making the first attack upon the corn, there seeming to be the strong probability that birds, particularly the English Sparrow, are the first depredators, the beetle only taking what is left. I have observed black birds pecking the young ears of corn in the fall, leaving the milk oozing out of the kernels, and have no doubt that this would attract even innoxious insects.

The BugLady’s beetles probably emerged as adults fairly recently and will be foraging through September. They will overwinter as adults in the soil and resume their feeding (and breeding) in early spring (these beetles emerged in central Wisconsin at the end of March, in the bizarre, early spring of 2012). Eggs are deposited near compost, soil, and manure piles, decaying wood, etc., and several sources said that Bumble flower beetles are among the species that will use ant nests. Eric Eaton, in the Kaufman Field Guide to Insects of North America, says that their “Grubs have been found in the nests of ants,” so maybe it’s not a universal practice. They pupate in a chamber they create underground. 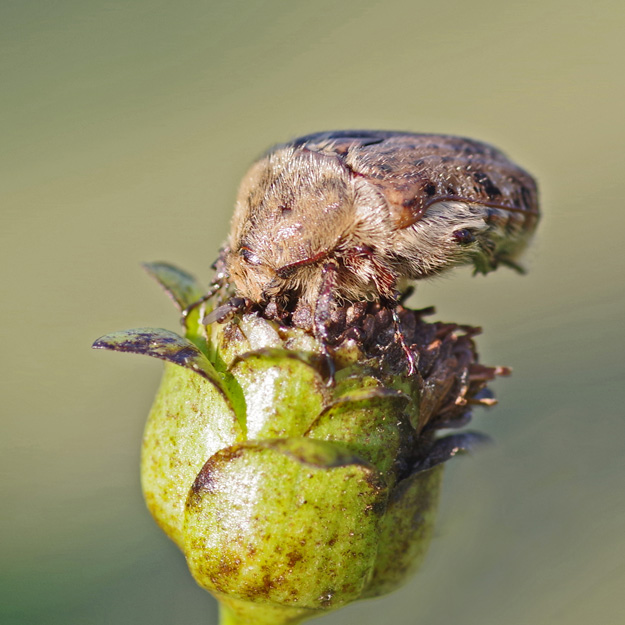 Appearing to be a bumblebee helps keep predators away, and they’re pretty well camouflaged, and the beetles are also chemically defended, producing what is described as a “pungent chlorine-like odor.”

The BugLady was curious about the connection between the beetles and all the other insects feeding at the same trough. Turns out that like the flower beetle, both species of butterflies come to fermenting fruit juices as readily as to flowers (and flies are, well, flies). Whatever’s going on in those seed heads appeals to all.