This week’s Bug of the Week is a retread of an episode that initially appeared in the fall of 2007. Its subject is the Box elder bug (BEB) (Boisea trivittata), which seems to be having a big year again in 2010, since they are everywhere the BugLady steps. These guys and gals are true bugs in the order Hemiptera (Hemiptera means half-wing and refers to front wings that are membranous on the tip half and opaque and leathery on the half closest to the body). Hemipteran wings cross over each other and make an “X” pattern. BEBs are in the family Rhopalidae, the Scentless Plant Bugs. 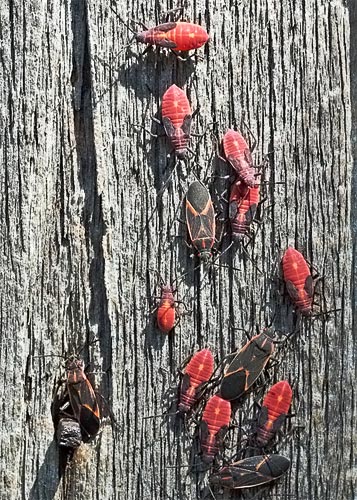 BEBs have a few other names, like “garage beetle” (they’re not beetles) and “stink bug” (a name already preempted by another bug family). BEBs, as you would expect, feed on/suck sap from the tender parts of box elder trees, especially from the seed pods (some municipalities ban female box elders for this reason). They have been observed eating other maples, ash, and a few species of fruit trees, plus grapes and strawberries, and their feeding may scar fruits. Some tree damage is reported in BEB Boom Years, when BEBs may also browse on the ground and in gardens. They can fly several city blocks, or up to a few miles looking for food.

In the spring, rust-colored eggs are hidden in crevices on the ground and in tree bark. Box elder bugs have simple/incomplete metamorphosis, so the young look like mini-adults. They add a few adult structures like reproductive organs and wing buds as they eat and molt. The younger nymphs are all red; they add black markings as they age. Adults have three stripes on their prothorax (first segment of the thorax), a red abdomen, and red veins in their wings. You can see a variety of ages in the picture. They look a lot like milkweed bugs (also pictured, of previous BOTW fame). Some autumns they are present in dense windrows in the grass near box elder trees. As the weather cools, the adult females start looking for a sheltered place to overwinter, and what better place than indoors? 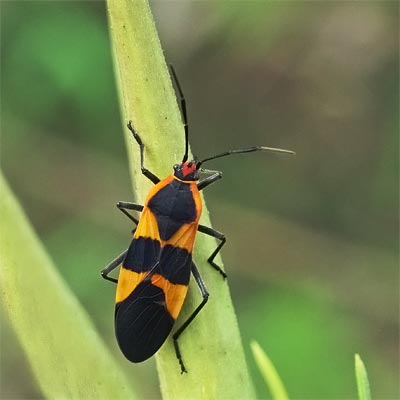 Once inside, they generally make themselves scarce. While they may be found on house plants, BEBs seldom feed on them; it’s a place in the sun that they’re after. They don’t breed during the winter—the indoor population is all female—and they become active again when they sense that spring has sprung. The BEBs you see indoors in spring are intent on getting outside to lay eggs.

Many of the on-line sources of information about BEBs are Exterminators or Extension entomologists, who are a bit heavy-handed about selling us on the pest status of this insect. Most pest control folks will admit up front that except during very heavy infestations, BEB feeding does not harm plants. They don’t carry diseases, they don’t damage the buildings they inhabit, they don’t bite people (well, hardly ever), and they don’t crawl inside our cereal boxes. The main issue with BEBs seems to be that for half of the year, they want to share our living quarters. The pitter-patter of little feet may be accompanied by an occasional deposit of bug poop (very occasional, since they rarely eat indoors). Several exterminator websites mention that BEBs leave an unpleasant odor when crushed. The BugLady has no first-hand knowledge of this. Members of the Scentless plant bug bunch lack scent glands, but the BugLady is loath to crush a BEB to find out, since she believes that all involved should survive each BOTW episode. The BugLady feels that this intolerance of any 6 and 8-legged cohabitants is yet another sign of our increasing estrangement from the natural world.

If you don’t like seeing these cheery bugs occasionally in mid-winter, an ounce of prevention is worth a pound of cure. Tighten up the house—window wells, pipes, holes drilled in siding for cable, torn window screens, cracked foundations, loose vents and exhaust fans, and badly-fitting garage doors are all entrances for BEBs. Get the work done before fall. Sprinkling boric acid or diatomaceous earth on the ground around the house and at possible entry points is thought to deter BEBs.

The following methods for dispatching BEBs were offered on-line: Spray them with a soapy water spray, straight laundry detergent, a natural pesticide, or with an aerosol wasp/hornet spray (fall spraying is considered more effective than spring spraying). Vacuum them up or sweep them out. Pour boiling water on them (try not to scald your plantings). Hire a professional to spray your house and yard (better living through chemicals). Pick them up with the sticky side of a piece of duct tape and then dispose of the duct tape.

Editorial Aside: The BugLady feels about this practice the same as she feels about those disposable live-traps for mice. It relieves the trapper of the physically and psychologically messy business of killing the critters directly, but it dooms the “trap-ees” to a slow, out-of-sight death by starvation instead. 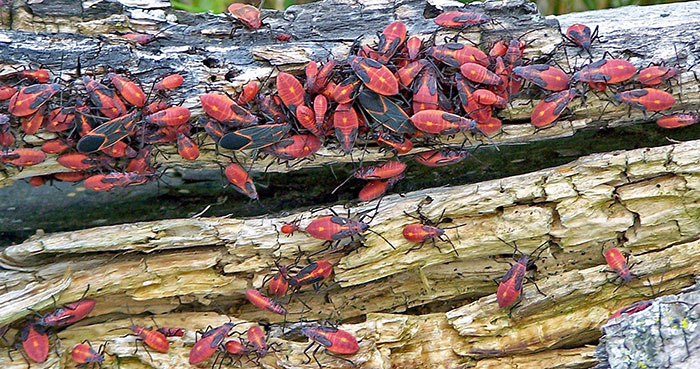 The BugLady’s kids were initially alarmed by the prospect of seeing these winter houseguests, so BEBs were renamed “Kate’s Friends” in order to put a different spin on their presence. The Bug Lady is uncertain whether her non-arthropod friends were charmed by the association, but the tactic got her children over their initial heebie-jeebies upon catching stealthy movements out of the corners of their eyes.