While the BugLady was stewing about who would star in this week’s show, she took a nice walk at the always-admirable Forest Beach Migratory Preserve, an Ozaukee-Washington Land Trust (OWLT) property between Port Washington and Belgium (WI). Her mind was made up by the three Black Saddlebags that exploded from the grasses and flew (tantalizingly) around (and around) over her head, and especially by the one that was exceptionally cooperative. Problem solved (well, except for the problem of photographing one in the air. The BugLady takes a lot of “Hail Mary” shots, a.k.a. dragonfly flight shots, and this one is typical, but the saddlebags are apparent). 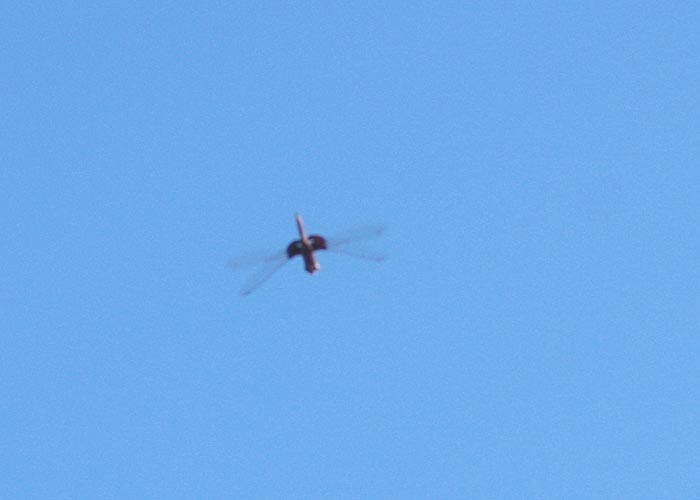 There are seven species of Saddlebags, family Libellulidae (Skimmers), genus Tramea, in North America, but only three grace Wisconsin—the Red, the Black and the Carolina, a migrant from the south that has been getting more common in the state recently. Genus members are largish (2+ inches long), long-winged dragonflies with clear front wings and a dark spot at the base of their two otherwise-clear hind wings. They have a slender body and a broad head.

They fly and glide a lot, reaching speeds of 17 mph, and when they perch, it may be down in the grasses close to the ground or clinging to a twig high in a tree (where they become invisible). Paulson, in Dragonflies and Damselflies of the East, says saddlebags perch more vertically than most skimmers, avoiding overheating by minimizing the amount of sun that hits the abdomen (other skimmers do the opposite—lessening exposure by pointing the tip of their abdomen to the sky in the obelisk position). Saddlebags may fly with their abdomen sagging on hot days. The big spots on saddlebags’ wings also serve to shade the abdomen. Paulson writes that a resting saddlebags may tuck its front pair of legs behind its eyes.

According to bugguide.net, the saddlebags narrowly escaped having their genus named Trapezostigma (for their trapezoidal wing-spot) rather than Tramea, from a Latin word trameo meaning to go over or through.

The Black Saddlebags (Tramea lacerata) is found throughout the U.S., into Canada, and south of the border well into Mexico. Black Saddlebags also have a presence on the Hawai’ian and the Caribbean Islands. They choose fish-free still/stagnant/very slow-moving water with lots of vegetation for their nurseries and will oviposit in roadside ditches.

They are one of a dozen or so American dragonflies that migrate; the offspring of the northbound Black Saddlebags return to the South, and their offspring come north with the spring. In fall, they join the Common Green Darners that drift along the Atlantic coast and the shore of Lake Michigan (Concordia U. and Lion’s Den Gorge Nature Preserve are two great spots to watch migration at eye level).

Saddlebags are called “dancing gliders” because of their uniquely choreographed courtship and egg-laying behaviors. A male patrols a territory of shoreline and open water about 100 feet long. He approaches a female and hovers above her, grasps her by the head and thorax with his legs and then bends the claspers at the tip of his abdomen forward to get the grip on the back of her head. Because they can store sperm, female BSs only need to mate once, so before he clasps the back of her head, the male must clean out any bodily fluids from a previous mating. Mating is brief if done aerially [the ultimate multitasking] and only slightly longer if the pair is perched. 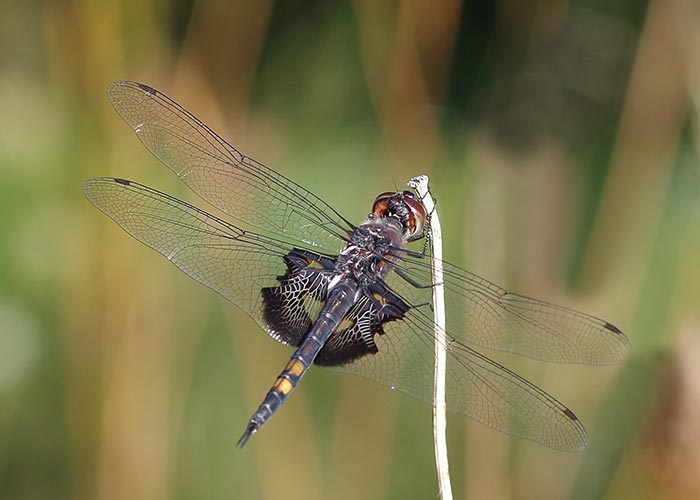 Together they fly out over the water at about knee height (our knees, not theirs). When she is ready to oviposit, he releases her, but hovers over/guards her as she dips down and taps the water surface gently to deposit a few eggs. Then she returns, the male reestablishes contact, and they resume the dance, cruising over the water surface until she is ready to lay more eggs. Her egg-laying is done with minimal disturbance to the water’s surface—Paulson says that the dance is observed from underwater, and that bass and other predatory fish have been known to follow a pre-occupied couple.

Young dragonflies are aquatic, feeding on smaller invertebrates below the water’s surface until they are ready to emerge. The University of Michigan’s Biokids website offers this picture of that event:

After internal metamorphosis occurs, with the adult body forming under the skin, an [almost] adult black saddlebags will emerge from the water and grasp a branch where it will complete the rest of its transformation. The cuticle begins to split apart due to the pressure exerted through a series of air intakes. The newly emerged adult, which is quite delicate until the new cuticle hardens, will then crawl out of its old skin (exuviae), allow the wings to open and harden, and then fly away (Dunkle, 2000).

Black Saddlebags are pretty effective at mosquito control, both as naiads and as adults. Studies have demonstrated that the aquatic naiads will eat several species of (aquatic) mosquito larvae and can consume as many as 38 larvae in two days. Adults use their excellent eyesight to pick their prey out of the air (they eat on the wing—more multitasking). MSs form feeding swarms that are typically male-only (females don’t). Despite their great eyesight, adults are preyed on by Kestrels and nighthawks. Their feisty, somewhat armored, spiny offspring fall prey to a variety of birds, frogs, and other aquatic critters including other dragonfly naiads.