The BugLady has said it before, and she’ll say it again—the insect order Hymenoptera (ants/bees/wasps) is famous for its social members (well, for stinging, too), but there’s more to the story than that. Honeybees, ants, and some yellowjackets and paper wasps form large colonies whose inhabitants are divided into castes—queen(s) (everyone’s Mom), drones (boy toys), and workers (sterile females). But the vast majority of Hymenopterans are not social (or are barely so—some tolerate the presence of their sisters in good nesting areas).

Today’s star is one of those solitary wasps, the Black and Yellow Mud Dauber (Sceliphron caementarium) (according to the excellent bugguide.net, the Latin caementarius means mason or builder of walls), with a cameo appearance by the Blue Mud Wasp. The Black and Yellow Mud Dauber is a common, native wasp that occurs in meadows and gardens from Canada to the West Indies and which has hitched a ride from North America to Europe and Australia. 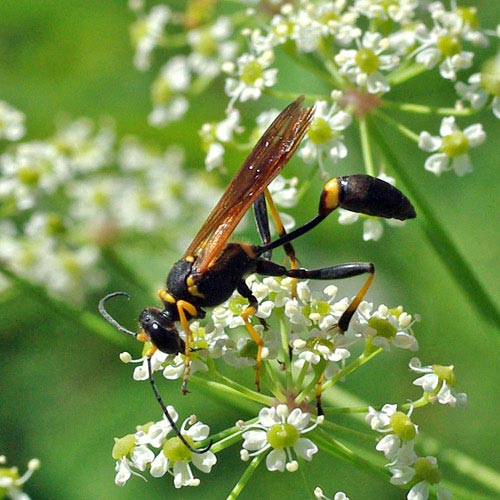 Black and Yellow Mud Daubers (BYMDs) belong in the wasp family Specidae, a.k.a. the Thread-waisted wasps, which have graced these pages before in the form of the Golden Digger Wasp and the Great Black Wasp. A constriction between thorax and abdomen is typical (but not universal) in the Hymenoptera. The connection between the thorax (middle section) and the abdomen (tail end) is called the pedicel, and some of the thread-waisted wasps have pretty extreme pedicels. The Sphecid family tree includes some large (up to 2”) and impressive hunting wasps. As Eaton and Kaufman say in their awesome Field Guide to Insects of North America, the family Sphecidae contains “Perhaps our most undervalued insects, many are gentle and colorful, with interesting behaviors to observe.” Yes, they can sting, but most solitary wasps are pretty peaceful (because they don’t have a communal hive to defend) and you have to work at it to get stung.

BYMDs build nests from mud, while other species of sphecids may nest in vegetation or in abandoned cavities. The female BYMD forms little bits of mud into spheres and uses the spheres to plaster vertical, side-by-side tubes under roof overhangs, bridges, or rock ledges. A good site will host generations of up-to-fist-sized nests. As each cell nears completion, the wasp hunts for and paralyzes invertebrates (spiders, in the case of the BYMD) to provision the nests. One source said a single spider per cell is enough; others said 8 to 15 to 33 spiders per cell. She leaves the cell open until it’s full (or puts a temporary patch on it to discourage nest parasites, like some species of cuckoo wasp which sneak in and swipe spiders—kleptoparasitism), and then she lays an egg on the final victim before she stuffs it in and seals the nest. The egg hatches, and with its meals assured the larva develops and then pupates in the privacy of the nest. It will chew its way out as an adult. Though its offspring are meat-eaters, the adults sip nectar or honeydew (an aphid by-product) or get fluids from the foodstuffs they collect for their young. They have been recorded at hummingbird feeders.

Enter the Blue Mud Wasp (BMW) (the BugLady hopes that the shiny blue wasp pictured here is Chalybion californicum; if it’s not, it’s a doppelganger, the cricket hunting Chlorion aerarium). The BMW has gone through quite a list of scientific names—Sphex caeruleum, C. halybion caeruleum, C. cyameum, and is now C. californicum (despite the California allusion, the Blue Mud Wasp is found throughout the country). BMWs live alongside BYMDs. In fact, BMDs take over BYMD nests to use as their own. According to one source, the BMD raids the current nests of the BYMD, removes the provisions, and replaces them with her own spiders and egg. Other sources say that she uses last year’s BYMD nests and even that she does not ever build her own mud nests. In any case, she must carry water in her gullet to soften and remodel the pre-existing dried mud structure. A large grouping of mud nests is generally occupied by both BYMDs and BMWs, and the BMW is considered an inquiline (Latin for tenant) of the BYMD. 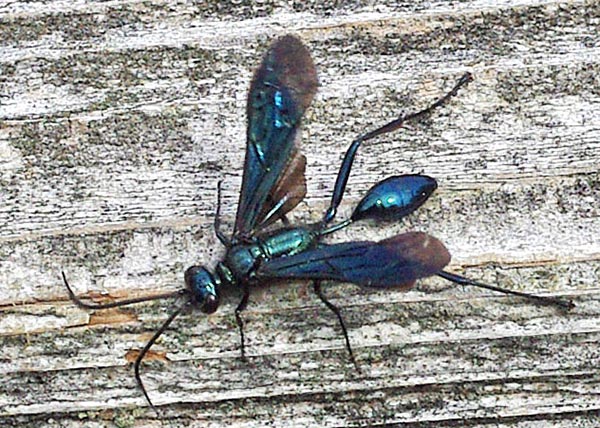 According to a study published in the Journal of Arachnology these two wasps, similarly-sized, after the same prey, and linked to the same habitat because of the BMW’s nesting habits, have divided (partitioned) the niche. It seems that both wasps find spider webs by chance as they fly over the grass-tops. They both like the black and yellow garden spider (Argiope aurantia, a big spider that often sits in the middle of its web during the day like a big sitting duck), but they exhibit different M.O.s when they find one. The BYMD, apparently not a “brain trust,” doesn’t seem to associate the web with the spider. It may bump into the web, causing the spider to drop to the ground (typical spider behavior). The wasp chases the spider on the ground, searching through the grass in ever-widening circles under the web, for two or three minutes. She may catch the original spider or she may find some innocent by-stander spider, or she may come up empty-handed and resume the hunt. The BMW finds a web, stands on its edge or in its center and uses her middle pair of legs to shake the web, which mimics the struggles of prey caught on the sticky strands (it’s called aggressive mimicry). If a spider comes out to inspect its “prey”—Gottcha! BMWs in the study had a 70% success rate using this tactic. Because of its ground-hunting, the BYMD ends up with a larger variety of spider prey, including jumping and crab spiders, than its sister wasp, who nabs web-using spiders. Observers reported that when they were successful, wasps often held their prey long enough to sip some spider hemolymph before transporting them to the nest site.

Interesting BMW Fact: According to Waldbauer, in The Handy Bug Answer Book, “the stinging, shiny-blue, spider-hunting wasp known as Chalybion is solitary during the day but at night forms sleeping aggregations that may include a hundred or more individuals. An individual may benefit from joining an aggregation…an individual that is “lost in the crowd” in a sleeping aggregation may not be the one a predator attacks, and the predator is likely to be dissuaded from making future attacks on the aggregation if it is stung by even one individual…”