The BugLady has been amassing shots of big, showy orb weaving spiders (Charlotte’s relatives) in the spider family Araneidae. FYI, in the course of her research, she has seen the name spelled Orb Weavers, Orb-weavers, and Orbweavers. She thinks she’s ID’d them correctly, but “picture-keying” has its limits, and there’s a lot of variability within each of these species. If she were smart, she would be satisfied just to get the genus right. The BugLady invites BugFans to visit bugguide.net, type the names of these spiders into the search box, click on “Images” and be blown away by the different colors and patterns of each. The BugLady also recommends Spiders of the North Woods by Larry Weber. Whoever they are, aren’t these spiders fine! Here, a bit late for Halloween, is something for Arachnophobes.

Orb Weavers have been practicing their craft for some 140 million years now (full disclosure—there are some non-OWs that weave orb-type webs). With more than 10,000 kinds of Araneids worldwide, they account for about a quarter of spider species.

Although OWs have eight eyes (two rows of four), their vision is not good. Their legs are adorned with bristles/spines and with an extra claw on each foot (that third claw helps them to manipulate silk as they spin it and to traverse the non-sticky parts of the web). Females are often considerably bigger than males and have large spherical abdomens. Some species are nocturnal, and others are diurnal.

Building a web is an amazing feat that involves sending a sticky line out into the breezes. If it catches on something, the spider forms the “spokes” of the wheel with non-sticky web and then uses sticky silk for the spiral. It takes about an hour. Some (but not all) diurnal OWs, especially in the genus Argiope, weave a heavy “zipper” or other pattern called a stabilimentum into part of the web. Guesses about the function of the stabilimentum are that it strengthens the web, that it allows the spider to control the tension of the strands in the web, that it gives birds a “visual” and bats an “echo” that keeps them from flying through the web, that it attracts insects by reflecting UV light, that it makes the rest of the web seem less conspicuous/more invisible, and that it provides a camouflaged spot for spiders to hang (head down) in the web’s center. Many nocturnal OWs eat their dewy web in the morning and rebuild it at night. Males are not avid web-makers.

OWs will often tackle prey that is larger than they are if it gets snagged in their web. They first paralyze it with a toxic bite, then wrap it, and later eat it. The front two pairs of legs handle the prey and the rear two pairs manipulate the silk. If the prey is a stinging or venomous critter, it’s “wrap first; bite later.” They tenderize it with fluid from their mouth, and then re-ingest their digestive juices as they eat the softened prey.

In the species shown here, Mom places from several hundred to a thousand eggs in one or more spherical egg cases/cocoons that are hung from the web or hidden in tree bark (that’s what those nuthatches are looking for in winter) or in some other crevice. She guards them until she is, inevitably, killed by the cold (“And no one was with her when she died.” Charlotte’s Web). Although some species hatch and make their way out of the case before winter, it’s more common for the spiderlings to emerge from the sac in spring. Some species hatch from their eggs in fall but remain within the egg sac, feeding on the yolk inside (and eventually on each other) as winter passes; others don’t hatch until spring. OWs are around for the full spider season, but they don’t really become big enough to be noticeable until mid summer/early fall.

The Black And Yellow Argiope/Garden Spider (Argiope aurantia) is a familiar, large (a female’s body may measure an inch-plus) spider that dwells in sunny grasslands, edges, gardens, wetlands and suburbs. Wikipedia says its Latin name means “gilded silver-face.” The thick zigzag stabilimentum woven into the web has given Argiopes the nickname “writing spiders.” Webs are generally built/repaired at night, and a BYGS will use a productive web site (the original meaning of the term) over and over. BYGS numbers have fallen dramatically and inexplicably in the BugLady’s fields in the past decade. 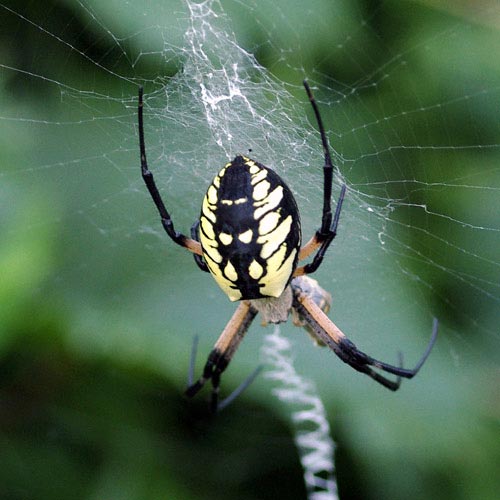 She makes several egg cases in fall and attaches them to the sides of the web (safe from ants, but not from birds and parasitic wasps, and not, apparently, from a bevy of inquilines either; researchers have monitored BYGS egg cases and tallied 19 species of insects and 11 species of spider that have emerged from them).

Males are nomadic, looking for romance, but they will make a small web when they find a female. They court by plucking/vibrating the female’s web (settle down, folks—the BugLady means this literally), hoping she can differentiate suitor from prey.

Banded Garden Spiders (Argiope trifasciata) have become more common in the BugLady’s fields as the BYGS numbers have dwindled; nature does abhor a vacuum. Studies suggest that the webs of BGSs (and those of other diurnal orb-weavers) tend to be oriented east-west, and that the position of the occupant in the center of the north side of the web, “belly” facing south, maximizes her exposure to solar heating. Although they are as large as those of the BYGS, BGS webs may lack a stabilimentum. 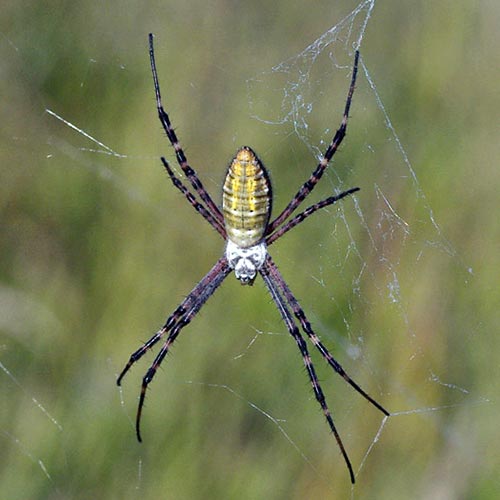 The Shamrock Orbweaver (Araneus trifolium), is also called the Pumpkin spider. One source compared the spider’s plump abdomen to the shape of a pumpkin; another attributed the name to the fact that SOs are out and about around Halloween. The family Araneidae is the third-largest spider family worldwide, and the genus Araneus is the largest spider genus, with 1,500 species known globally. 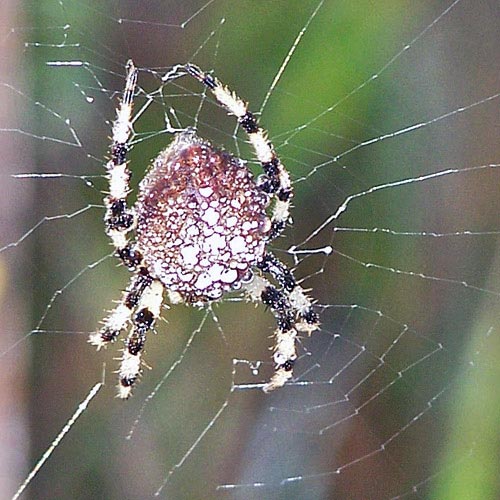 The BugLady sees Marbled Orbweavers (Araneus marmoreus) on the forest floor on distinctly cool days in early November, challenging the limits of cold-bloodedness. Adults spin a web and then wait, concealed in a silken hiding place, monitoring vibrations via a “signal strand” attached to the web. When an insect gets caught in the web, the MO will “process” it and carry it to its hiding place to eat it. 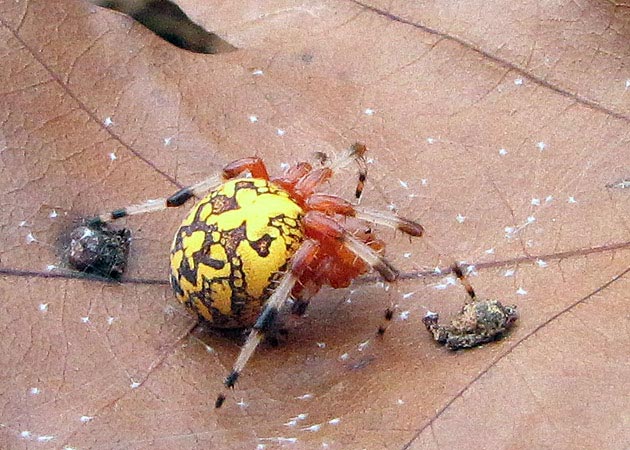 The Cross Orbweaver (Araneus diadematus) is an alien spider who, like the Bridge spider of recent BOTW fame, immigrated to our shores from Europe (it’s also called the European garden spider and the Diadem spider). Like the bridge spider, it likes to hang out on buildings, especially on walls with exterior lights. 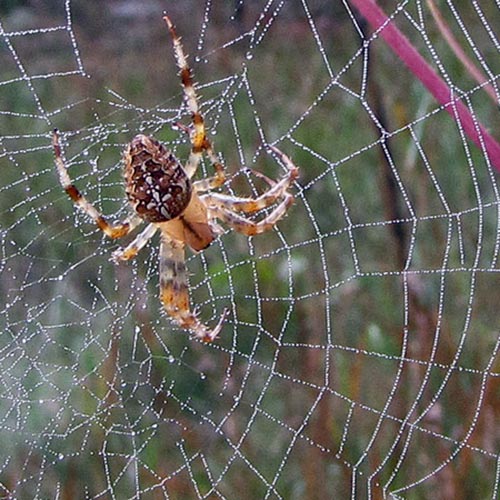 The BugLady is calling this shy creature an Arabesque Orbweaver (Neoscona arabesca) because of the pairs of slanted, dark lines on the abdomen. Spiders in the genus Neoscona are called “Spotted Orb Weavers.” According to bugguide.net, the AO “stays in a retreat (usually a curled up leaf) to the side of the web during the day. At night it rests in the center of the web with the tip of the abdomen pushed through the open space in the center of the web.” 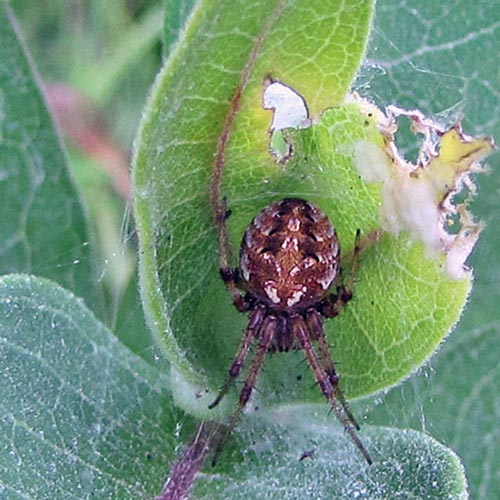 Although they have the right equipment to bite you, an orb weavers’ favorite strategy is avoidance. If you insist on man-handling one, it will defend itself appropriately.