This episode is a little chewier than usual—we’re going to plunge deep into science, but we’ll bob back up to the surface again in no time at all. And yes, there will be a quiz.

Bugs! One big difference between them and us (besides the leg count) is that they are soft on the inside and hard on the outside and we are the opposite. Our endo (internal) skeleton holds us up and gives our muscles places to attach, which, in turn, allows us to move. Their exo (external) skeleton does the same. The body wall of a bug is a boneless tube, but rather than being smooth on the inside like a tennis ball can, the interior has ridges and knobs that strengthen it and provide places of attachment for the muscles. The exoskeleton offers protection from predators, parasites, and excess water loss or gain,

As usual, the system is not as simple as it looks at first glance. Starting on the outside and working our way down, the top layer is the thin epicuticle, the insect’s first/last line of defense against outside water getting in/interior water getting out. The epicuticle is covered by wax, and the wax by a “cement layer” that keeps the wax intact.

Just below the epicuticle is the procuticle (which is comprised of an upper exocuticle and a lower endocuticle). The thick procuticle contains protein strands woven together with a tough material called chitin (not chiton, which is a marine invertebrate). The exocuticle layer can be quite stiff (sclerotized) because its proteins are hardened, while the endocuticle layer is more flexible because its protein is unhardened (we’ll see why that’s important in a minute). Cuticle covers the outside of the insect, plus the fore and aft ends of its digestive tract, and it lines the tracheal/breathing system, too. An insect’s color, both pigmented color and structural color (the layers of tiny, reflective plates that cause iridescence) is found in the procuticle layer.

Below the cuticle layers is the epidermis/hypodermis, a living, cellular layer that secretes the non-living cuticle that lies above it. Sensory hairs originate in this layer and poke up through cuticle; the hairs give information to nerves at their base.

The innermost layer of the endoskeleton is the “basement membrane,” which supports the epidermis and separates the exoskeleton from the body cavity.

Cuticle is made of chitin, and chitin (a derivative of glucose) is pretty interesting stuff. It can be flexible (in its pure form) or stiff (mineralized with calcium carbonate, which can come from the water that surrounds an aquatic insect or from a terrestrial insect’s food). Invertebrates like millipedes, whose exoskeletons are “high maintenance” due to the wear and tear of simply being a millipede, are tied to habitats with lots of calcium in the soil. The muscle attachments within a bug’s body are made of a stretchy form of chitin that is six times stronger than human tendons. Chitin is impervious to alcohol, weak acids and bases, and digestive juices, but is susceptible to some bacterial action. 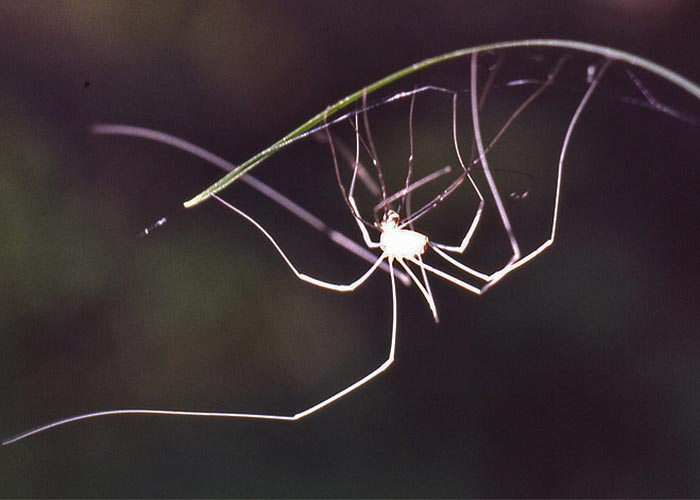 Armored caterpillars, anyone? “Hard on the outside” is a relative term. Alert BugFans have probably been thinking, “But wait!—Not all insects are created equal. A moth is much more squish-able than a beetle” (Well, if BugFans are thinking that, the BugLady hopes it is purely theoretical). It turns out that not all cuticle is created equal, either. The calcium carbonate and other substances that are mixed with chitin to form the exocuticle make it more rigid; the endocuticle is predominantly chitin, and so is softer. An insect’s relative “softness” depends on whether the endocuticle or exocuticle predominates. Soft-bodied insects or life stages (like larvae) have a higher percent of endocuticle in their exoskeletons. 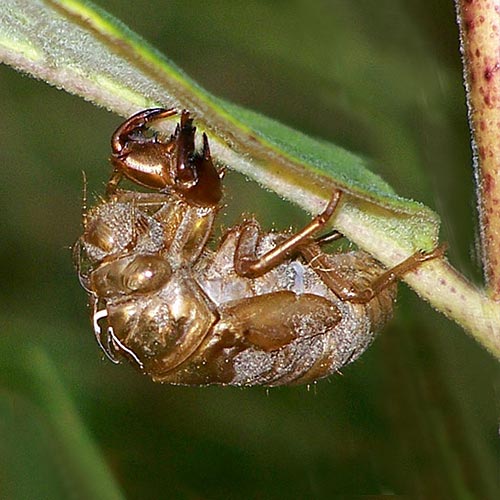 The insect’s legs are covered by mineralized (hard) cuticle, but its leg joints (and the joints between the body segments) are made of the leathery form of chitin. An insect’s abdominal segments typically have one hard “plate” across the top, one on each side, and several across the underside, and flexible cuticle between the plates does allow for expansion—think of a female mosquito feeding or the very gravid beetle pictured here. 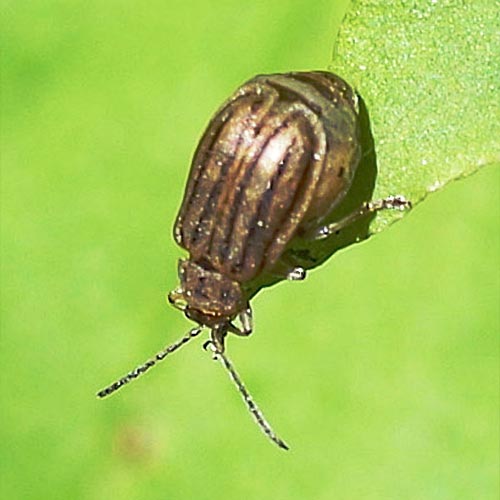 The problem is that an exoskeleton, even though it’s somewhat flexible, can’t grow larger. In order to get bigger, an insect must molt (or moult, if you’re British). The Greeks called it ecdysis (to take or to strip off) (hence the classy term ecdysist).

Molting begins with a “quiet time,” during which the epidermis builds a new epicuticle and exocuticle under the old, separates its outer self (the old, top cuticle layers) from its inner self (the new), and then uses a special molting fluid (enzyme) to dissolve its endocuticle. It reabsorbs/recycles needed minerals from the old endocuticle to use in building the new one. The insect sheds the old cuticle by pumping up its head and thorax with fluid or air or by increasing its blood pressure. The “skin” splits at its weakest spot, often along the back of the thorax, and the “new” bug pulls itself out (a shed skin is called an exuvia; the plural is exuviae). The BugLady loves finding these “empty insects”—complete right down to their eye coverings.

The wrinkled, new cuticle is, temporarily, so soft that the insect is virtually helpless—a limp body on rubber legs. The insect pumps air or water under the cuticle to expand it, and after a few hours, the cuticle hardens. The bug eats until its new suit becomes too tight (and, to recover minerals, many insects start by eating the old suit), and then the process starts again. Most insects (except silverfish and bristletails) molt five to seven times, and only during their immature stages. Molting as adults would be hard to accomplish without damaging the wings (although mayflies manage to pull it off on their final molt). Immediately post-molt, insects are pale, and it may take a few weeks for their colors to “set.” Newly-molted box elder bugs are salmon in color until they darken. Over a series of molts, an immature insect can sometimes regenerate lost or damaged limbs. 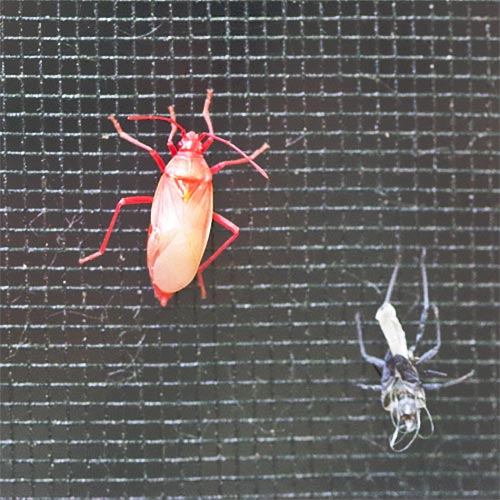 An insect that can’t molt successfully is doomed to suffocate within its old skin (some pesticides chemically prevent molting), but the act of molting is dangerous, too. The dragonfly pictured here (with a marsh fly sitting on it) apparently did not have enough strength to emerge as an adult. The BugLady isn’t sure about the grasshopper, which seemed to be stalled when she photographed it but was gone the next day (or maybe some bird enjoyed a feast). Silverfish will cannibalize their brethren if they discover them in mid-molt. One study put molting mortality at 80% to 90% (if Mother Nature didn’t come up with these mortality factors at all stages of the game, think how many insects would there be!).

Although a stronger exoskeleton can result in a larger species, one drawback of bonelessness is that you just can’t get very big—unless you are supported by water (just ask the Giant Squid).

The good news is that even if you didn’t ace the quiz, you can appreciate the magic of exuviae when you find them.