Today’s bug is a lovely little assassin bug named Zelus luridous (other than the pretty generic “long-legged bug,” it has no common name that the BugLady can find). Assassin bugs are true bugs, in the order Hemiptera, in the family Reduviidae. 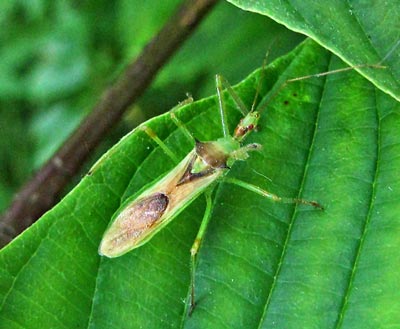 It has been a while since the BugLady has encouraged her readers to haul out the trusty Edith Hamilton Mythology books that they undoubtedly squirreled away during their high school years. Long story short: Zelus was the son of Pallas (a Titan) and Styx (the river). He and his siblings, described as “winged enforcers,” guarded Zeus. Zelus exuded strong emotions, and the word zeal comes from his name. The BugLady was surprised to learn that luridus is Latin for pale yellow or sallow (shocking and sensational are later meanings). If this critter isn’t Zelus luridus, it’s Z. exsanguis, another great moniker which means just what you would guess it means. Ah, the etymology of entomology!

But we digress. Again. The genus Zelus is a small one (about 60 species) that is more common south of the border. Only about a half-dozen species reside in the U.S., and they mostly live in the south and southwest. Zelus luridus is the most common species, and Eaton and Kaufman, in the Field Guide to Insects of North America, describe them as “slender, lanky assassins, occurring on foliage” (the assassins that frequent flowers are hard on honeybee populations).

The BugLady found this mini-trio—daddy longlegs, worn-out stone fly, and assassin bug—poised along a wooded edge one early summer afternoon. Two predators and one prey item, and possession is nine points of the law. The BugLady has never read that daddy longlegs steal prey, so maybe the assassin bug was simply an innocent by-stander.

Zelus’s food-getting strategy is similar to that of other predaceous bugs. It stalks (fellow foliage-visitors/dwellers like aphids, flies, beetles, caterpillars including tent caterpillars, and occasionally, another Zelus). It grabs (though its front legs are unimpressive). It pierces. It injects (to paralyze or kill and to initiate some “external digestion”). It waits. And finally, it slurps (the enzymes in the injection “liquefy” its prey’s innards).

Sources are divided on how painful its bite is. Some say “not at all” and some say “very” and add that careless handling may actually cost you a few skin cells at the site of the injection. When its beak is not in use, a bug tucks it away in a rough-surfaced groove located between its front legs. Assassins can produce a sound by rubbing the beak against the sides of the groove. 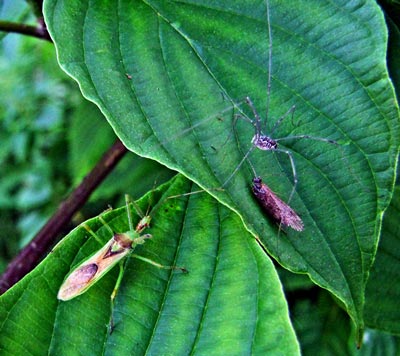 So what is Z. luridus famous for? First, parental care of young is not that common among the arthropods, and paternal care is even less so (ah, but remember the male “smaller giant water bug,” genus Abedus, of previous BOTW fame, on whose back the eggs of the next generation are laid. He protects the eggs until they hatch, exposing them alternately to water and air, and stroking them with his hind legs). The female Zelus lays her eggs in several clumps on a twig or leaf, and the male stands guard directly over or close by the egg masses. Scientists tested the males’ resolve by waving their hands over them or trying to pick them up. Males who were guarding eggs generally stood their ground, and non-guarding males departed. When they were shown a life-like model of a small wasp that parasitizes eggs, most of the guarding males attacked it. His assistance may continue after the eggs hatch; clusters of nymphs seem to stay close to both their empty eggs and to their protector for a few days, and there are several observations of males bringing food back for the young.

Second, the legs of Zelus are not equipped with hooks and big muscles, like the legs of ambush bugs, but it turns out that they don’t need them. This genus of willowy bugs has a special adaptation that allows them to snag their prey more efficiently—sticky traps. They are walking sundews! Zelus has both pointed hairs (called sundew hairs) and blunt ones on its front legs. A gland on each front leg manufactures a sticky resin that the insects smear onto the hairs onto their legs to help snare their prey. The resin also allows them to adhere to leaves they live on and keeps them from getting blown away by the wind.

It turns out, though, that young Zelus do not come into this world resin-ready; in fact, they don’t develop the ability to produce resin until after their first molt. But, after exiting their eggs, they pause and retrieve some of the sticky coating that their Mom smeared over the egg mass before she turned it over to Dad. This “starter goo” will tide them over until their own resin factories kick in.