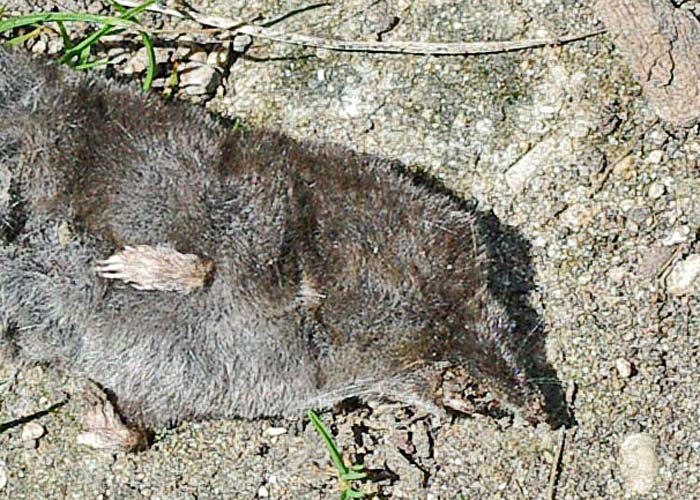 This is a revised version of an article that the BugLady wrote for the winter, 2013-14 issue of The BogHaunter, the newsletter of the Friends of the Cedarburg Bog, an organization that partners with UWM and the DNR to educate people about the Bog and to preserve it. The Bog is the BugLady’s church and her shrink.

Northern short-tailed shrews (Blarina brevicauda) are one of the most common small mammals between the Great Plains and the Atlantic, but they are rarely seen. In winter, when they aren’t sheltering in out-buildings, they’re found in the intranivean and subnivean layers – the spaces between the ground and the top of the snow. The meandering, inch-wide tunnels they make just below the snow’s surface offer some protection from predators, though foxes and owls can hunt by ear, and shrew bones are common in owl pellets.

Largely nocturnal in summer, they spend the daylight hours under rocks or logs, in leaf litter, and as deep as 20 inches underground in tunnels that they dig with their front paws (they also use burrows made by voles and moles). In winter, they hunt during the balmier daylight hours. They’re habitat generalists.

A short-tailed shrew’s winter diet includes mice, voles, and other shrews. In warm weather, they add insect larvae (shrews can be valuable controllers of pest insects), snails, slugs, earthworms, crickets, salamanders, snakes, and even small birds to their diets. They eat some roots, seeds and berries year-round, and they may also scavenge on dead animals. They usually dine underground, and they are known to cache food caught when they’re full, for use in leaner times.

Shrews are always operating in overdrive; their heart rate of 800 to 1300 beats per minute exceeds that of a hummingbird, which goes from 250 beats per minute at rest to 1250 in flight. Their high metabolism requires them to feed every two to three hours and to eat up to three times their weight daily in order to keep going. They hunt for about five minutes out of every 30.

Because they have glands that produce poisonous saliva (few other mammals do), short-tailed shrews can pick on critters their own size. The venom isn’t injected through hollow fangs; the shrew has to gnaw on its victim a bit. The venom, a neurotoxin, slows their prey’s heart and respiration rate and can kill them or can paralyze them for future use. Short-tailed shrew bites are dangerous for dogs and cats, and even humans experience burning and significant swelling at the site of a bite.

Although they look mouse-like, short-tailed shrews are not rodents, but are grouped with moles in the order Insectivora. They are three to four inches long (males are a bit larger than females) plus an inch-long tail that they hold up in the air as they travel (they walk on those short legs, rather than hopping), and they weigh about an ounce. They have a pointy snout, short, gray fur that can be brushed in any direction, and they lack the large external ears that characterize the rodents.

Like most tunnel-dwellers, their vision is poor (one source said that their eyesight is so bad that they sometimes find their prey by bumping into it accidentally), but their senses of touch and hearing are well-developed. Some sources say that they have a good sense of smell, but others disagree. They scent mark their tunnels with a foul-tasting musk that’s manufactured in glands on their belly, but if their sense of smell is poor, this could be a warning to other species. They communicate using a vocabulary of squeaks and clicks (some of which we can’t hear), and navigate underground using echolocation, like bats. They are said to growl contentedly while feeding, which the BugLady thinks is charming.

Except during the breeding season, short-tailed shrews tend to be solitary and territorial. Three or four litters are born each year, and the young of early litters may be parents themselves by the end of fall. A three-year-old shrew is a very old shrew; winter mortality is high, and most don’t make it to their first birthday. 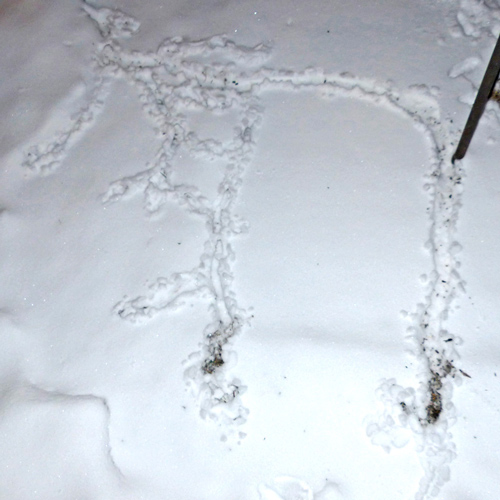 Add short-tailed shrews to the growing list of animals that are making themselves at home in the big city. In a study of shrews reported in a blog called Urban Habitats, Virgil Brack, Jr writes about short-tailed shrews nesting in a vegetable garden, on an island in a parking lot, and in a crabapple tree in Cincinnati. He told of one shrew that entered a garage and fed on a package of hamburger stored there (captive shrews love beef). Brack also noted that short-tailed shrews are known to come to bird feeders. Shrew tunnels are common in the snow below sunflower feeders, and it’s not known whether they are preying on invertebrates found there or feeding on the seed itself, but caches of corn have been found in the wild.

The BugLady regrets that the only pictures she has of short-tailed shrews are of dead ones (dead insects can often be posed to look like live insects, but alas, a dead shrew only looks like a dead shrew). The BugLady figures that the dead shrews she finds have simply run out of gas; alternatively, that they were killed by predators that were subsequently discouraged by the shrew’s chemical defenses. This article from the National Park Service offers another interesting explanation for shrew die-off in the section titled “Live Fast, Die Young, Leave a Smelly Corpse”, which can be found by clicking here.

The Missouri Department of Conservation puts out lots of great material about wild animals. See this link for some good pictures of short-tailed shrews, plus an overly-lurid video whose narrator is having way too much fun.