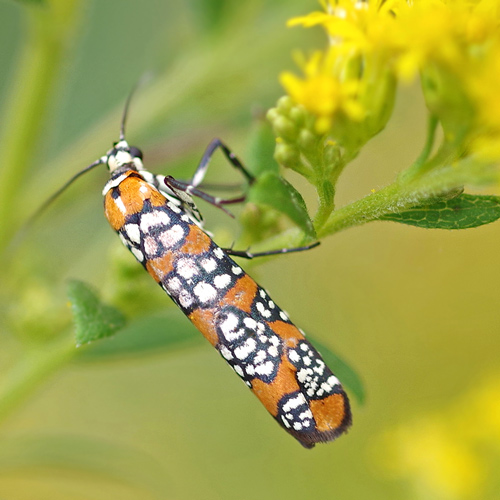 It’s always a treat to find one of these jewel-like insects nectaring, usually on goldenrod. They are day-flying moths, though their tendency to sit with wings wrapped around their bodies makes them look like beetles, and their bright colors make them wasp-like in flight.

Before 1784, AWMs were found in southern Florida and points south, their caterpillars feeding peacefully on the leaves of several species of native trees in the genus Simarouba in the Quassia family (Simaroubaceae). In 1784, a related Chinese tree called the Ailanthus tree or Tree of Heaven (Aitanthus altissima) was introduced into Philadelphia. On the plus side, it grows like crazy and tolerates city pollution well. On the minus side, it grows like crazy, producing suckers by the bushel and killing neighboring trees via allelopathic chemicals. And it stinks – it’s sometimes called “Stinking sumac” (it’s not related to our common sumacs), and the Chinese name for the species (“chouchun”) translates as “foul-smelling tree.” It’s considered a noxious weed in parts of Europe, the US, and Down Under, and it’s sometimes called “Tree from Hell.”

It turned out that Tree of Heaven can thrive in colder climates than its Florida relatives and that it was acceptable fare for the AWMs. So, when Ailanthus trees eventually extended their range south into Florida, the moth hopped on board and moved north. 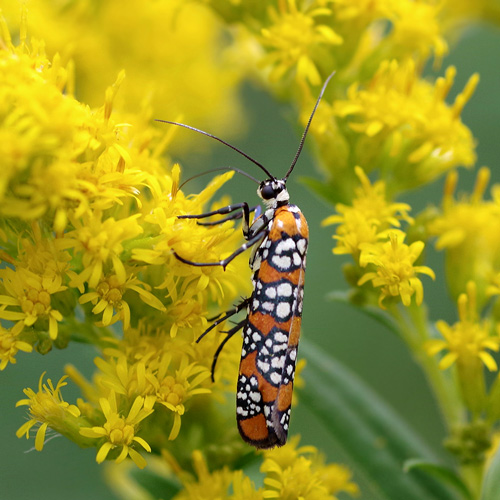 Though it still can’t survive a Polar Vortex, the AWM has extended its range considerably; the moths recolonize the northeastern parts of North America each summer, and climate change is allowing it to establish resident populations farther north.

As its name suggests, the larva is a dietary specialist, feeding (almost) exclusively on Tree of Heaven (bugguide.net contributors also report seeing it on sumac). Ailanthus leaves are a veritable pharmacy of chemicals, including substances that retard growth, feeding, and reproduction. There are three ways that insects deal with toxic food plants – they don’t eat them, they’re really good at eliminating the chemicals quickly, or they’re able to sequester poisons in special organs where they don’t bother the caterpillar but can harm its predators. AWMs can get away with those striking colors because, due to their caterpillar’s diet, they taste bad, and birds avoid them. The presumably-more-edible Gold-banded cydosia moth dodges predators by mimicking the AWM.

The gregarious AWM larvae throw a web of silk around a bunch of leaflets and then feed inside this shelter; their short, stiff hairs keep them from falling out of it (although an alarmed caterpillar will back out of the webbing and drop, attached to its home by a strand of silk). It’s an all-purpose abode – they feed inside the webbing (and some sources said they feed outside it at night), they make their pupal cases in it, and they lay their eggs on the silk “tent,” too (on their natal web or on someone else’s). The journey from egg to adult takes about a month, the adults are long-lived, and there are several generations per year. For some nice pictures of life cycle, check out Buckeye Yard & Garden onLine.

It wasn’t until 1911 that a chance observation by a Philadelphia entomologist connected the moth to the tree. The next question was, “If the tree was introduced, where did the moth come from?” For that story, see this publication from Kenneth D. Frank.

According to the great website Illinois Wildflowers, which includes information about the “Faunal Associations” of plants, the Tree of Heaven/Hell is also a host of the spectacular Ailanthus Silkworm/Cynthia moth (Samia cynthia) (https://bugguide.net/node/view/313264/bgimage and https://bugguide.net/node/view/330267/bgimage) whose story turned out quite differently than the AWM’s. It was brought here from China in the 1860’s to produce silk, and, of course, it escaped. Despite its caterpillar’s diet, neither the adult silk moth nor its larvae is chemically protected. The Ailanthus silkworm is mostly found in the urban areas along the Atlantic Coast where its host lives, but its distribution is spotty, and bugguide.net questions whether any wild populations remain.

Bugs in the News VII