Now that the fly season is almost over, maybe we can view this topic with proper scientific detachment. Flies belong to the order Diptera (two wings); they have two, membranous forewings and vestigial hind wings that have been reduced to knobs called halteres (which help the insect balance). They have mouthparts that may be adapted for piercing, lapping or sponging. This episode, “A Few Flies” is the first of several devoted to flies, and we begin at the more annoying end of the continuum.

FYI, in the names of the true flies, “fly” tends to be a separate word, like “bee fly” and “snipe fly.” Non-flies, like “butterfly” and “dragonfly” get to consolidate.

Whether you are attempting outside activities or trying to sleep in the wee hours, there is little that is more annoying than the hum of a mosquito (well, except when the cat is throwing up, somewhere, in the dark). That aggravating hum is actually a love song; he sings alto, she sings tenor, and when they hear each other, they vary their tone—by changing the frequency of their wing beats—until both are humming at the same pitch. Physically, metaphorically and spiritually. 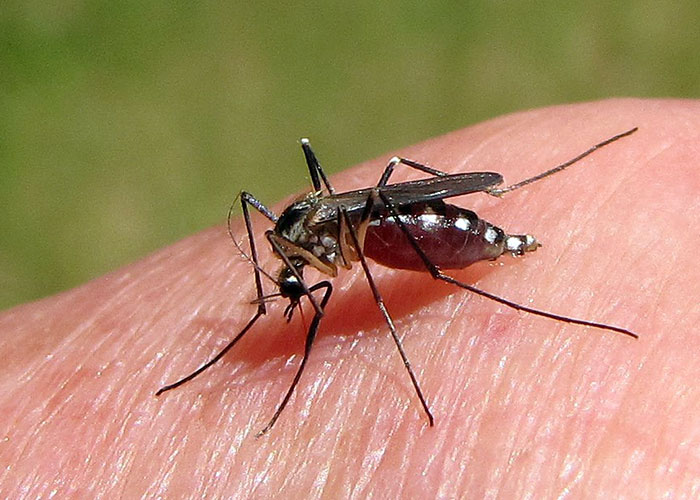 A female ingests a blood meal before each cluster of eggs she lays (males suck on plant juices). She injects, with her saliva, small doses of anticoagulant and anesthetic to aid the process. It takes about a month (in some wet spot, natural or man made), for an egg to morph to a larva (wriggler), to a pupa (tumbler), and finally to an adult. In their adult and immature forms, mosquitoes (and many other flies) are essential foods for a tremendous variety of wildlife, both aquatic and terrestrial. 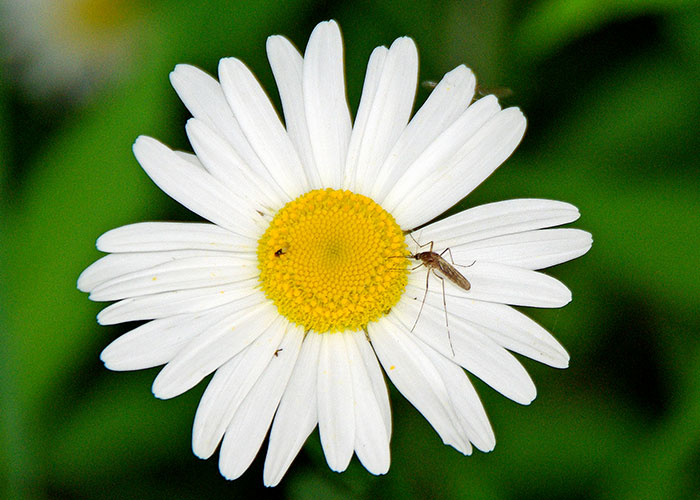 For reasons that are not completely clear, mosquitoes are more attracted to some people than to others. It may be a response to clothing color (they prefer dark), perfume (thumbs up), body odor, sweat, or to distinctive carbon dioxide exhalations.

Deer flies are in the same family Tabanidae) as greenheads and horse flies, and the general life history information is similar for all—bloodthirsty females who may dabble in vegetarianism if warm-blooded prey is scarce, nectar/pollen-eating males, and predaceous, (variously aquatic) larvae that hatch from eggs laid on surfaces above water, drop into the damp/wet, and may take two winters to mature. Unlike mosquitoes, deer and horse flies are often “stealth” fliers that will circle their target before landing and then bite immediately; you may not know they’re there until they punch that red-hot needle into your skin. 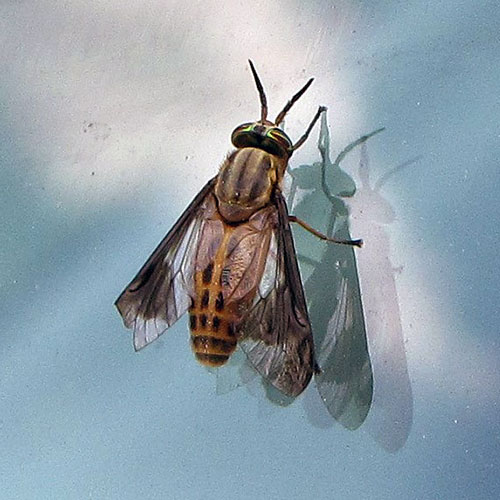 Compared to that of mosquitoes, the deer fly season is intense but relatively short. The typical Wisconsin deer fly is not a bad-looking fly, with splotchy wings and, often, spotted eyes; there are around 100 species in North America.

You know about deer flies. Wear a hat.

E. Laurence Palmer, in his fabulous Fieldbook of Natural History refers to horse fly mouthparts as “a series of cutting and piercing stylets that can penetrate the toughest hide.” Horse fly bites may bleed after the “perp” has left, because her saliva contains an anti-coagulant that makes her work easier. The Tabanids are known or suspected to be vectors in a number of diseases. 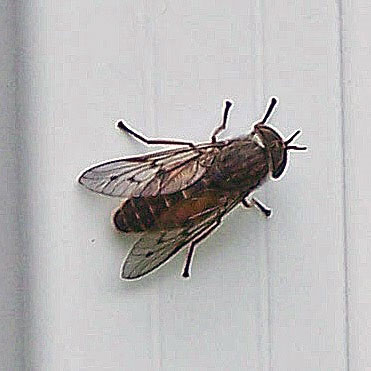 You know about horse flies. Wear a hat.

This rhino-sized Black Horse Fly weighs in at close to 1 ¼ inches long but looks much, much bigger; it is not the tiny-but-infamous biting Black Fly of north woods (and south woods) fame. The male is inky-black and the female is smoky brown, and Kaufman, in the Field Guide to Insects of North America, speculates that this is the “Blue-tailed Fly” of “Jimmie Crack Corn” fame. According to Kaufman, the female Black Horse Fly hangs out on vegetation, waiting to pursue moving objects, warm-blooded and otherwise; horse flies and deer flies will pursue cars (all those eyes and still near-sighted). A common mid-summer experience in the BugLady’s neighborhood is driving down the driveway with a hoard of deer flies surrounding (and keeping up with) the car’s side mirrors. Black Horse Flies are considered a serious plague on livestock, which can be weakened by frequent attacks! 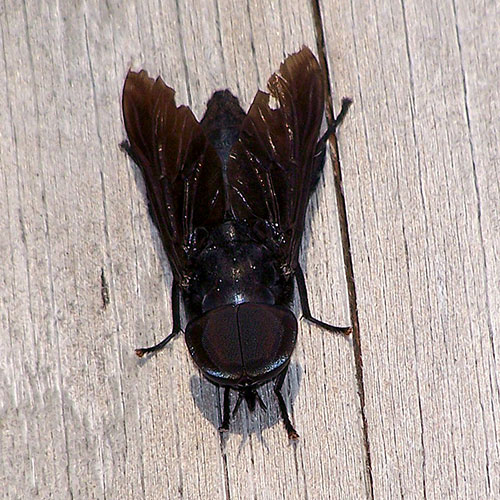