This lovely spider is called the Six-Spotted Fishing Spider (Dolomedes triton), and yes, the BugLady is aware that there are more than six spots on the animal’s abdomen, but six refers to dark spots hidden on its underside. The BugLady wrote a too-short episode about this critter 4 ½ years ago, but she has re-researched the SSFS and so is re-issuing it. 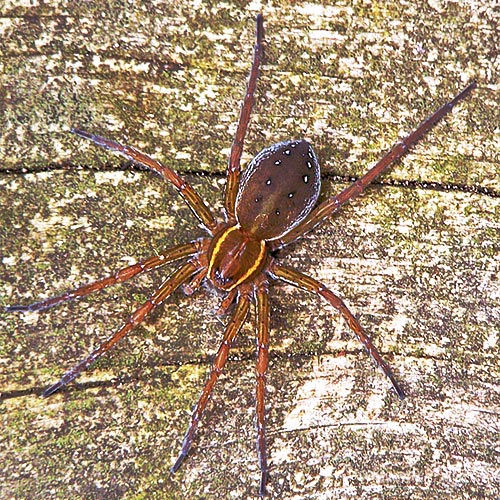 Fishing Spiders are in the genus Dolomedes, in the Nursery web spider family, Pisauridae. One source said that Dolomedes comes from a Greek word meaning wily or contriving. Triton was the son of Poseidon. There are 100-plus members of the genus worldwide, and because of their habitat choices, they’re also called wharf spiders, dock spiders, and raft spiders. North America has nine of those species—four live in still water; four in streams, and one is found in trees. They are often mistaken for wolf spiders, to whom they are not-so-distantly related.

SSFSs are found in wetlands, especially wetlands bordered by lots of vegetation, and they’ve developed multiple ways to get around within their habitats. Although they do not spin webs to snare prey—non-web-spinners are often called “wandering” spiders—SSFSs do make silk for several other purposes. They are “opportunistic” carnivores that will eat just about anything that comes along.

Hungry for fish? An SSFS can dive underwater (as deep as seven inches) and can easily take a tiny fish; in fact, its strong legs allow it to capture prey that is larger than the spider itself (including small goldfish). It’s able to walk on submerged vegetation, and it may retreat underwater when alarmed. 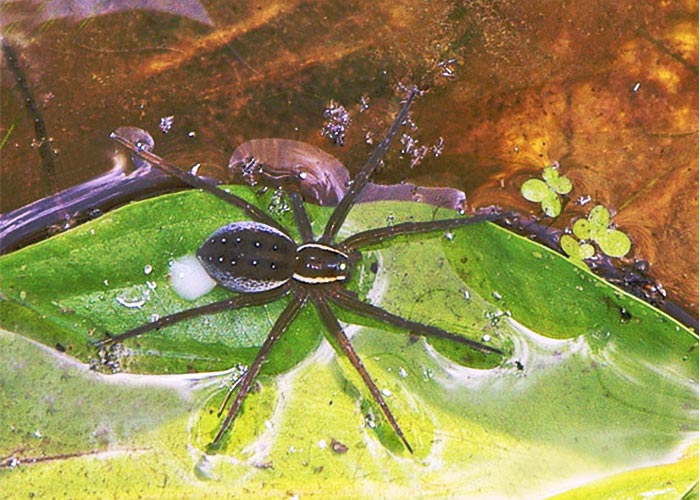 A fishing spider has “book lungs,” alternating layers of air pockets and a blood-like substance. Its body is covered with short, water-repellant hairs that hold an additional layer of silvery air against its body when the spider submerges. With this “air tank”, it can stay submerged for more than thirty minutes, but all that air may make it so buoyant that it has to grab a plant or rock to keep from floating to the surface.

It frequently hunts at the water’s surface, where its eight eyes allow it to locate nearby prey visually and where it may stay motionless for several hours waiting for food to appear. Like a water strider, an SSFS uses the sense of touch in its front legs to detect the struggles of insects that have swooped too low and become trapped in the water’s sticky surface film. It walks out to its prey, grabs it with hooked front feet, subdues it with venom, and eats it. It eats the competition, too – other surface-feeders, especially water striders. Some sources claim that an SSFS can distinguish the vibration of a trapped leaf from that of an insect or of a lunging frog; others said they cannot. 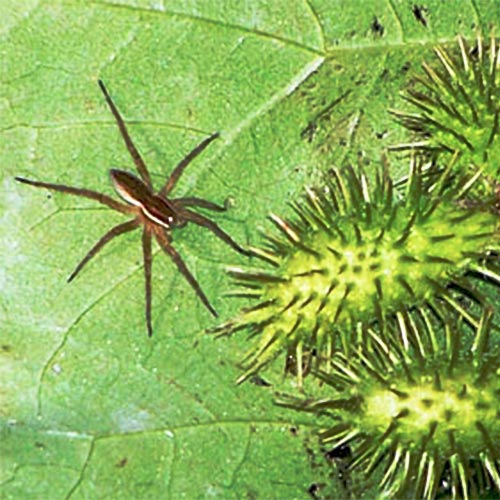 Besides walking, an SSFS can run across the water, row across it using several pairs of legs like oars; or glide, pushed by the wind like an iceboat.

An SSFS is equally at home on dry ground—hunting along its shoreline, on leaves of shoreline plants, and on floating leaves in the water.

Spiders in the air? These spiders have been observed jumping up off the water’s surface to snag prey (or to avoid becoming the prey of birds, fish, frogs, snakes, and dragonflies), and they can disperse by ballooning.

SSFSs, like many spiders, are sexually dimorphic; he is half her size. When a young male’s fancy turns to love, he proceeds with caution, because he is prey-sized and she needs protein to produce yolk for her eggs. The signals are chemical, vibratory, and tactile. He may follow her pheromone-laced silk dragline across the water, actually pulling himself along it (her scent is in the water, even without the dragline). When he finds her, he waves his legs and jerks, and then expresses his further ardor by leg-tapping. These vibrations produce ripples that spread and reach her. If she is receptive, she waves, drums her palps (structures near her mouth), and then they spar for a while. His actions defuse her prey drive—somewhat. If she does cannibalize him, it increases the chances that her egg sac will hatch. 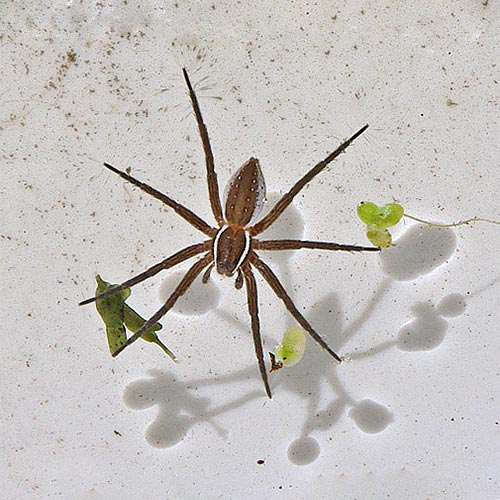 Experiments have been done to discover why she eats her mate. Is it merely nutritional (called adaptive foraging—and she may eat him before he becomes a sperm donor) or is it the heat of the moment (aggressive spillover or misplaced aggression)? The results are inconclusive.

Her eggs are placed in a silken case that she totes around with her. A Wolf spider attaches her egg case to spinneret’s at the rear of her body; the SSFS carries them in the front, with her palps. Nursery web spiders got their name because when her eggs are about to hatch, she builds a silken “nursery web” for the sac, and the spiderlings hatch out within its shelter. She stays with them for a week or so until they leave the nursery. It takes young SSFSs two winters to mature enough to perform their risky dance on the water.

Dolomedes tenebrosus, sometimes called the Dark Fishing Spider is also pictured here (tenebrosus is Latin for dark or gloomy). The DFS is found away from water on tree trunks, rocks, under bridges, and on other vertical surfaces, as well as at pond edges. They also enter buildings, where a female’s 3 ½ inch leg-span and assertive demeanor can create quite a stir. 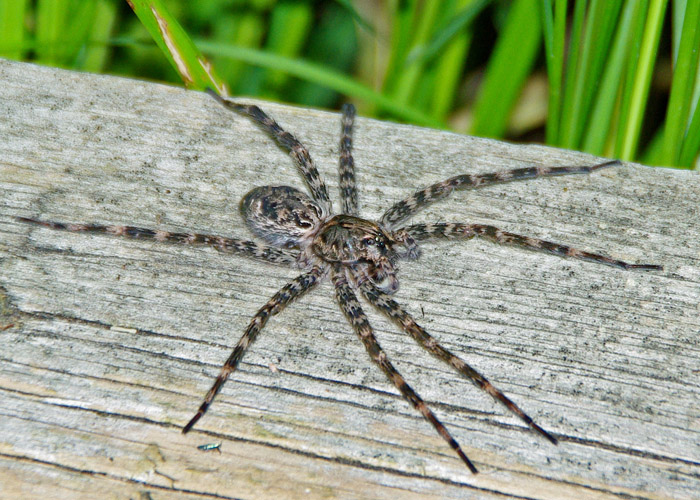