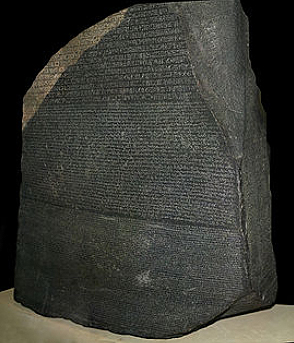 Dr. Christelle Fischer-Bovet, Assistant Professor of Classics, University of Southern California, and 2014-15 Solmsen Fellow, Institute for Research in the Humanities, University of Wisconsin-Madison
“The Ptolemies, the Alexandria and Rosetta Decrees, and Translocal Cosmopolitanism”

This talk will engage with two interconnected questions. First, Dr. Fischer-Bovet will argue that the successors of Alexander the Great in Egypt, the Macedonian dynasty of the Ptolemies (323-30 BC), had imperial goals and actively built an empire, although scholarly tendency has been to consider their kingdom essentially an Egyptian national state. Second, she will turn to the role of the local elites in the imperial project. She will examine both the well-known Rosetta Stone and the newly discovered trilingual stele that record decrees of the Egyptian priests in Alexandria, who voted to introduce the cult of Macedonian king in the Egyptian temples. These steles are not simply evidence of the accumulation of culture but are producing further transcultural moments, such as feasts and festivals in honor of the king and of the dynasty. They point to the emergence of what may be called “translocal cosmopolitanism” within the Ptolemaic state.