I never thought that I was going to be able to travel abroad, much less study abroad, until I received the David Mulroy scholarship. It was such an incredible honor to be chosen for the scholarship when this was its second year of being alive. Truth be told, I read the email in the break room at work and I just started crying. Many people were very confused, but they congratulated me as soon as I told them in between the hiccups. It was a very confusing night.

Anyway, I received the scholarship and, as much as I wanted to travel to Greece, I knew that I would probably survive a little easier in Italy – a little less octopus in the dishes there. Through UWM, I was able to apply to API – Academic Programs International – and head to John Cabot University in Rome, Italy for the summer semester. This is an American college that is pretty much in the heart of Rome, and I spent about six weeks baking in the Italian July sun. For a pale kid from Wisconsin, I was out of my temperature element. Through API, they set us up in an apartment a few blocks from the main campus building and every morning I walked to school, grabbing an iced coffee on the way. I can honestly say that I miss that small café with that small coffee. I took two classes at John Cabot, History of Rome and then a Shakespeare class. I could’ve taken an Italian class, which they offered both as a class or just general tutoring, but I could get by since a lot of Romans speak pretty decent English. Besides that, I could say a few general and polite phrases in Italian, so they at least knew I was trying. That’s what counts. You try. And be polite. With the Shakespeare class, we focused on plays that were Italian in nature – Julius Caesar, Titus Andronicus, Merchant of Venice, etc. – and we were situated pretty decently in the city to be able to walk to a few historical landmarks to solidify what we were reading. We visited a synagogue in the Jewish ghetto, La Torre Argentina – place where Julius Caesar was stabbed, except now it’s a cat sanctuary – to name a few. With the History class, we didn’t do any excursions, but it was fun to learn about places that I could literally walk to.

When I wasn’t in class, and not doing homework, API encouraged excursions from us, sometimes day trips and once a whole weekend. They took us to Narni, a small town in the mountains that inspired C.S. Lewis for The Chronicles of Narnia, and then they took us on a weekend trip to Sorrento, Capri, and then to Pompeii. Capri is a tiny island off the coast of Sorrento and, out of the group of about 15-20 of us, we could wander how we liked around the island. I spent a lot of time at the beach and I walked up to the main part of town – since the town is higher up than the coastal part of the island – and I could see for miles. Plus, I turned into a lobster. Seriously, I still have slight burn lines on my shoulders. Pompeii was also amazing to go to the next day because I had just learned about it from Prof. Cova’s class at UWM. We walked around a (small) part of the town and were able to go into the Forum and I could walk between buildings and name them. It’s an entirely different feeling to read about something in a class and then be able to go up to that same thing and touch it in real life. API really picked a good trip, which did come included in the payment for the program, so we weren’t paying extra for no reason. 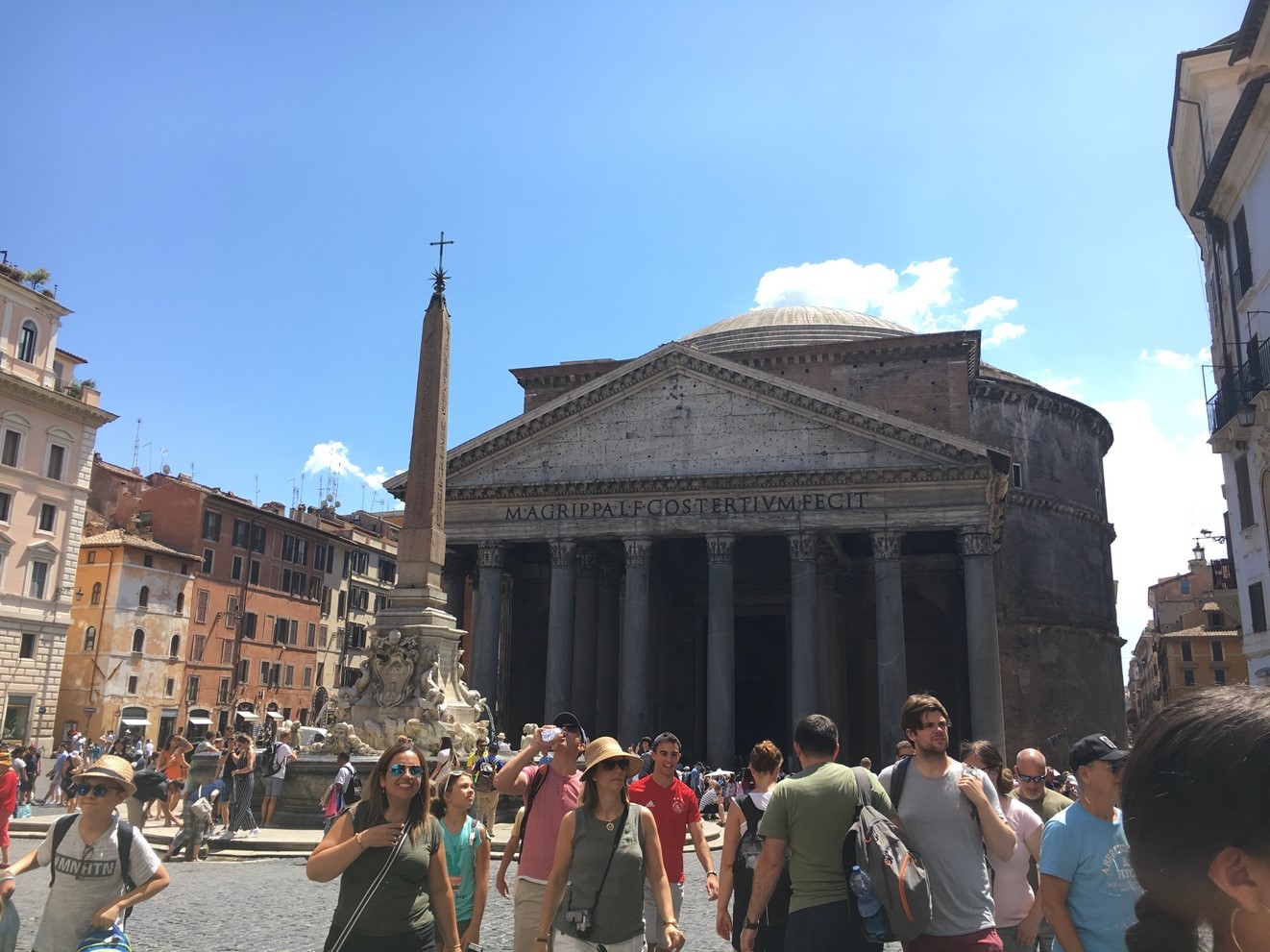 Italy, as a whole, was an amazing experience. I am someone who is often confined to a specific space and I like this space, I feel safe and nothing surprises me. But I pushed myself Way out of my comfort zone to take a 10-hour flight to a city where I can’t even speak the main language and I survived. I not only survived, but I absolutely loved being there. The classes were enjoyable, being able to walk the streets of Rome were amazing, seeing the Tibur River, drink some wine or beer with some Italian classmates I became friends with, it was all a thrilling experience. Even now, as it’s 20 degrees in Wisconsin, I can remember cooking under the Italian sun and I even weirdly miss the sunburn.

If possible, I highly encourage anyone to study abroad, or at least travel. I know that without this scholarship, it would’ve taken a lot more to manage to get out there. So, for that, I am incredibly grateful.

A Summer in Bologna – Greek and Latin Summer School (2018)

When life hands you $10,000, you must go to Italy. First, I must acknowledge the honor and privilege of receiving such a generous scholarship. It was an unreal experience reading the email from Dr. David Mulroy himself, announcing that I had been selected to receive the scholarship. Immediately shocked, as I had not even considered applying until I was urged to do so by several professors. Secondly delighted, as I realized I had just been handed the study abroad opportunity of a lifetime. It is not a common occurrence that a Classics department is endowed with such funding. 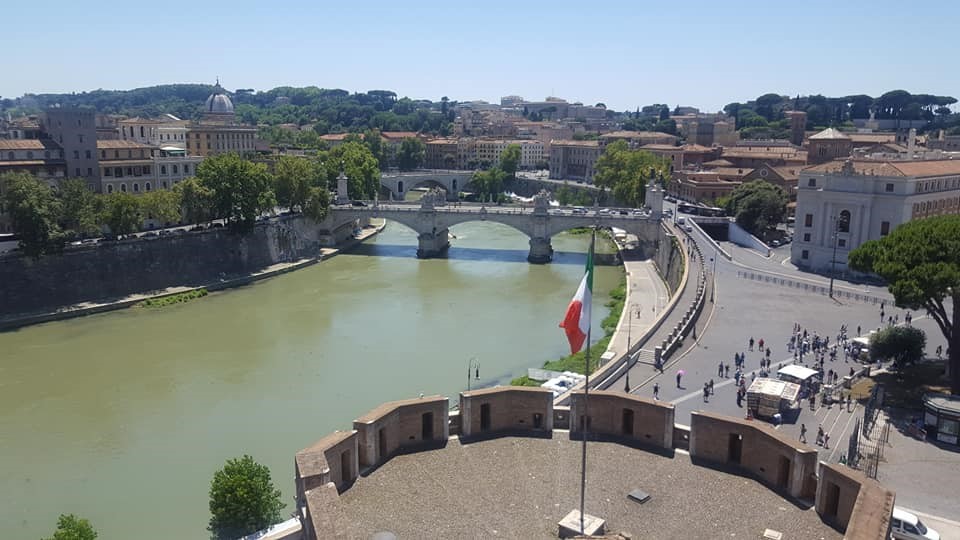 I was presented with many travel options, so long as the program was either in Greece and Italy and focused on the study of Classics. I had already been to Greece a few summers back and opted to travel to Italy. Professor Cova referred me to a program at her Alma Mater in Bologna. This program was not for the faint of heart: an intense, three-week program that immersed Greek, Latin and Ancient Culture into a nine-credit package. While there were many other programs that offered lighter workloads while still supplementing an enriched, educational experience, I thought the GLSS program would be most beneficial to not only my language studies, but to my academic resume as well.

The city of Bologna itself is stunning and great for students. It is easy to navigate, boasts the oldest university in the world and provides excellent food. I stayed in a hotel that was just a five-minute walk from the university, however there are plenty of dormitories around the city provided for students. They fill up quick though, so I had to book more expensive accommodations.

The first day of the program offered a practical and historic tour of Bologna, as well as an introduction of course expectations. The classes themselves were challenging: Latin began promptly at 9:00am, a one-hour break for lunch around 1:00pm, and Greek began at 2:00pm with the day ending around 6:00pm. A substantial amount of homework was given, which resulted in late hours studying at a café. This was the ‘double-duty’ intermediate course that I chose, and while the days were long and vigorous, the course proved to be extremely helpful in the end. I had not been enrolled in a Greek course in over two years and was surprised at how much of the grammar and vocabulary I was able to recall. Whether a student has zero to minimal knowledge or many years of the Greek and Latin languages, the program offers both beginner and intermediate courses. It was an enriching experience that certainly improved my language skills.

The GLSS program additionally offers an optional weekend trip to Rome (for a couple hundred Euro extra). I could not miss an opportunity to visit the Eternal City and so I went. Rome was a whirlwind of beauty, history and fantastic architecture. It is hard to experience all of Rome in just two days, but it was well worth the trip. In between my studies, I had one weekend to explore Italy on my own. I and a few other students took the train to Venice and had the day to tour the city. While Venice has a reputation for being full of tourists (which it was), the charming streets away from the noise stole my heart. We were fortunate enough to visit the Ducal Palace, housing the most elaborate and lavish wall and ceiling paintings I have seen.

I left Bologna with a reinforced knowledge of the Classical languages, a dash of modern Italian that I picked up while there, lifelong friends, and an unforgettable experience – all thanks to the generosity of the donor who founded the David Mulroy scholarship.