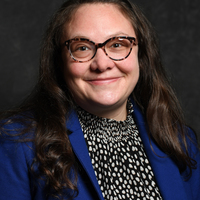 Congratulations on this amazing achievement and opportunity, Megan!

My time at the University of Wisconsin-Milwaukee culminated in two degrees and a wealth of community, critical knowledge, and self-growth. On transfer, I came to UWM as a working poor first-generation college student. At that time, I was unaware of the theories used to describe my positionality, but I had ample experiential understanding. Through coursework in Africology, English, and Women’s and Gender Studies, my critical consciousness grew. I was a most engaged listener in Dr. Sangari’s classes while discussing colonization in its many forms; I learned feminist theory from Dr. Mansson-McGinty and took my first course on women’s literature with Dr. Kennedy. I studied Octavia Butler’s work with Dr. Grayson well before the arrival of Afro-futurism as praxis and theory in higher education classrooms. I learned firsthand about care and community from Dr. Buley-Meissner, and I grew significantly as a writer under the tutelage of Dr. Banerjee. Finally, I learned to challenge white skin privilege in conversation with Dr. Bellegarde-Smith and Dr. Jay.

I took on jobs at the Women’s Resource Center and, later, Sociocultural Programming. During my time at the WRC, I played a central role in bringing bell hooks to campus and had the once-in-a-lifetime chance to introduce her in front of a large audience. I can still remember the crack in my voice and my sweaty palms while at the podium, as well as the deeper understanding that the experience would be one of the most definitive moments of my life. bell hooks’s work continues to shape how I think about myself and my place in the world, informing my scholarship and pedagogy while framing how I engage in social justice.

When I saw the position advertised for a Resident-Teacher Scholar at the bell hooks center at Berea College, I knew it was a dream job and a long shot; I applied. As I filled out the application, imposter syndrome reared its head- the feeling and deep insecurity of “not being enough” that elides with being from a positionality like my own. I found myself questioning my abilities, fit, and education at public universities instead of ivy league institutions. I chose to cite the experience of bringing bell hooks to campus in my cover letter. Reflecting upon that fortuitous introduction, I started connecting its relationship to my learning and growth trajectory. I recognized the role each faculty and staff member played in guiding me along the way. I reminded myself that I’d been studying and applying bell hooks’ work for almost twenty years in non-profit organizations and in K-12 and secondary education settings across the United States. I submitted the application. During the interview process, I thanked the committee for considering me. I shared that I felt simply honored to be considered for such an exciting opportunity. I will never know if my students at Berea College fully understand the sincerity with which I shared how excited I was to be there on the first day of class, but I am so very grateful for the chance, journey, and all of the folks who guided me along the way.