The Scott Greer Award for Postgraduate Contribution to Urban Affairs is awarded to an alumnus for distinguished civic leadership and community practice.

The Scott Greer Award for Postgraduate Achievement in the Study of Urban Social Institutions is awarded to an alumnus whose postgraduate publication, teaching or professional activities have advanced our understanding of urban social institutions, their history, interrelationship, consequences, and change.

The Scott Greer Award for Outstanding Research in Urban Studies recognizes the recent and ongoing superior research of a current student. 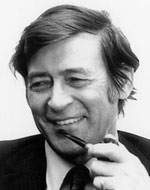 Scott Greer was Distinguished Professor of Sociology and Urban Studies at UWM from 1974 until his death in 1996. He was the first director of the doctoral program in Urban Social Institutions at its founding in 1975. Greer was an internationally renowned urban scholar, and a published poet, as well. Some of his best known titles are The Emerging City: Myth and Reality; Governing the Metropolis; Urban Renewal and American Cities; The Concept of Community and The Urbane View. Cities of the Soul, published posthumously, is a collection of poetry, letters and essays.