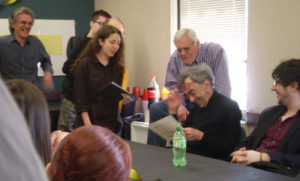 We, his friends and colleagues in the Department of Philosophy at the University of Wisconsin-Milwaukee, sadly report that Fabrizio Mondadori died suddenly at his home on February 15, 2021.  We honor, miss, and remember him fondly.

Fabrizio’s research trajectory began in contemporary metaphysics and philosophy of language.  His Italian translation of Quine’s Word and Object was published as Parola e oggetto (1970) while he was still a graduate student.  His PhD thesis (1972) dealt with modal semantics and determinate names.  “Available Properties” (1986) and his ground-breaking Philosophical Review paper (co-authored with Adam Morton, also regrettably recently deceased), “Modal Realism: The Poisoned Pawn” (1976), are very much papers in contemporary philosophy.  His work then gradually turned to historical excavation of the roots of modal metaphysics, first in the work of Leibniz – with several important papers in Studia Leibnitiana on essentialism, superessentialism, and compossibility from the mid-1970s onward – and later in the work of Duns Scotus, which increasingly occupied Fabrizio’s scholarly attention from 2000 on and which led to another set of important papers in medieval philosophy, most notably “The Independence of the Possible According to Scotus”, which appeared in the 2005 proceedings of the septcentennial Scotus conference, Duns Scot à Paris 1302-2002.  After his retirement in 2014, he continued to publish papers and to work on a book manuscript on Duns Scotus. 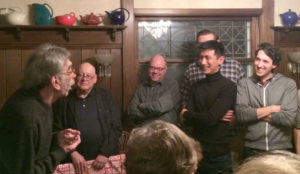 Fabrizio’s work consisted in exceptionally close readings of texts and arguments.  He read  several languages (English, French, German, Spanish, and Italian) and was a skillful reader of the Latin used by Scotus and his commentators.  He was the recipient of several awards for his work, including a Humboldt Research Fellowship, and his work was honored at a conference, Themes from Mondadori, held at McGill University in 2008.

His scholarly reputation helped the department to grow what was to become a premier MA program at UW-Milwaukee, to which Fabrizio contributed by teaching, at both the graduate and undergraduate levels, courses in metaphysics and history of philosophy (especially Medieval Philosophy). 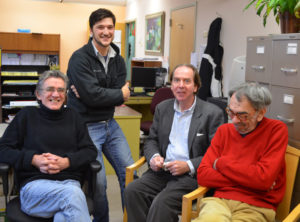 Fabrizio had many and diverse interests outside of philosophy.  He possessed detailed knowledge of the areas that interested him and held strong opinions about what was good and bad in them.  In games and sports, he loved chess, football (the Premier League variety), basketball, and snooker.  In art, he loved Mannerism (especially the work of Bronzino); in cinema, he was a huge fan of Peckinpah’s movies, but also of more popular movies like John Carpenter’s or movies featuring Peter Sellars.  His musical tastes ranged from Bach and Corelli to Sigur Ros and Dylan. His knowledge and love of literature was immense and ranged from Jorge Luis Borges (whom he read in the original), Brian O’Nolan, and James Kelman; to modern poetry from T.S. Eliot, through the Beats, and John Ashbery; and to horror writers like H.P. Lovecraft, Arthur Machen, and Algernon Blackwood.  He delighted in the etymology of English slang.  He loved to travel and simply walk around his favorite cities – Amsterdam, Lisbon, and Buenos Aires – and, upon his return, to regale his friends with tales of his adventures. 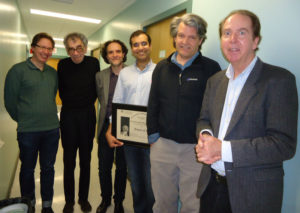 Fabrizio was one of a kind, a great conversationalist with a unique sense of humour.  He will be sorely missed by his friends at UW-Milwaukee and across the world.

Fabrizio is survived by his wife, Céliane, daughter, Emma, son-in-law, Parker, and grandson, Elio.  For those wishing to honor him, his family has requested that donations in his name be made to St. Jude Children’s Research Hospital, 501 St. Jude Place, Memphis, TN 38105 or at https://www.stjude.org/donate/donate-to-st-jude.html