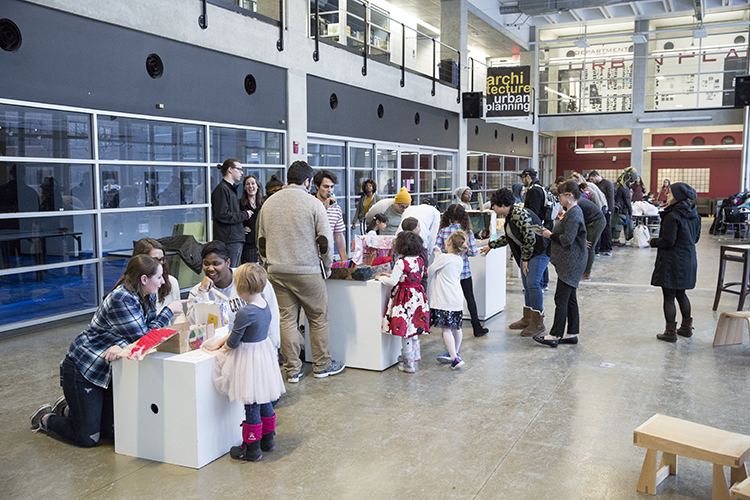 Students and displays fill the atrium of the School of Architecture and Urban Planning. (UWM Photo/Troye Fox) 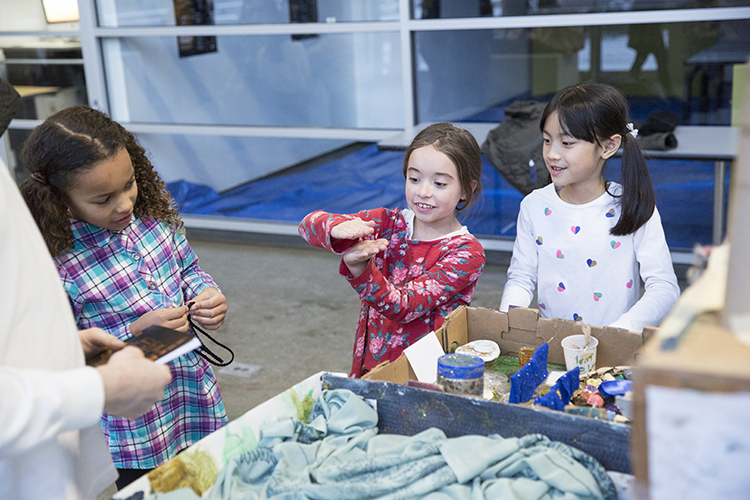 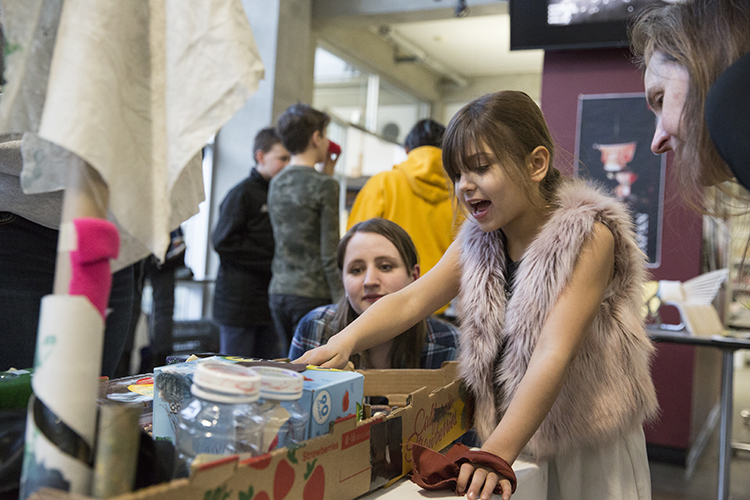 Vivienne Parente da Costa points out a feature of her work to Katie Posewitz (left) and Mo Zell, associate dean of the UWM School of Architecture and Urban Planning. (UWM Photo/Troye Fox) 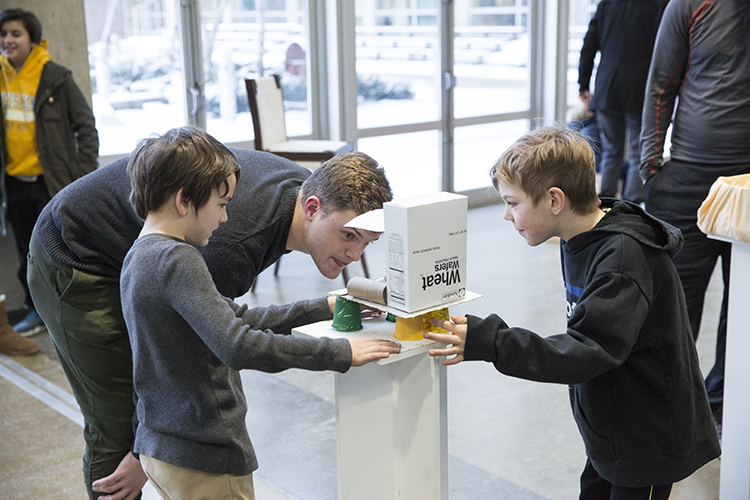 Brodie Kerst leans in for a close look at the creation of Eli Stevens (left) and Oliver Zell. (UWM Photo/Troye Fox) 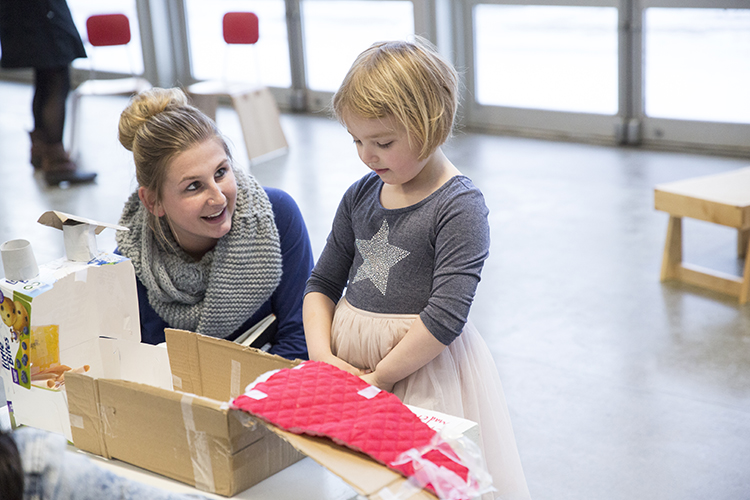 Madeline Erickson-Bell is a little shy as she shows her work to Brittany Gabrielse. (UWM Photo/Troye Fox) 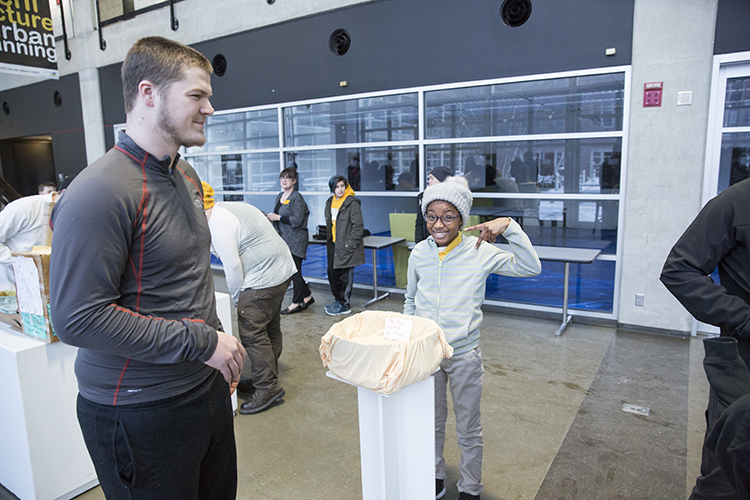 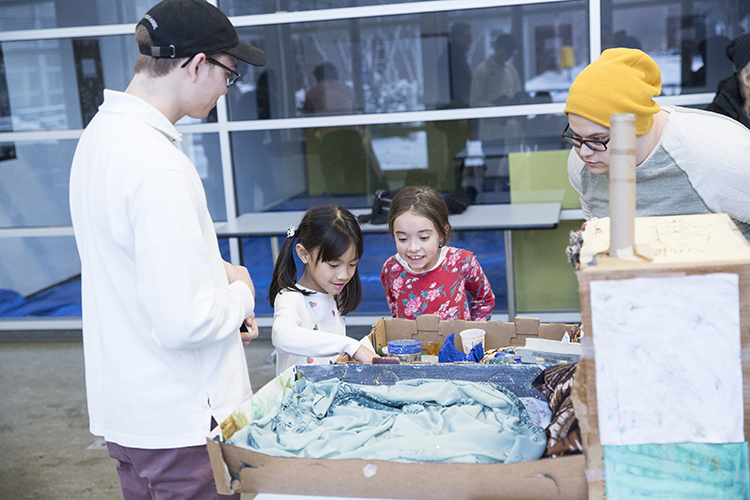 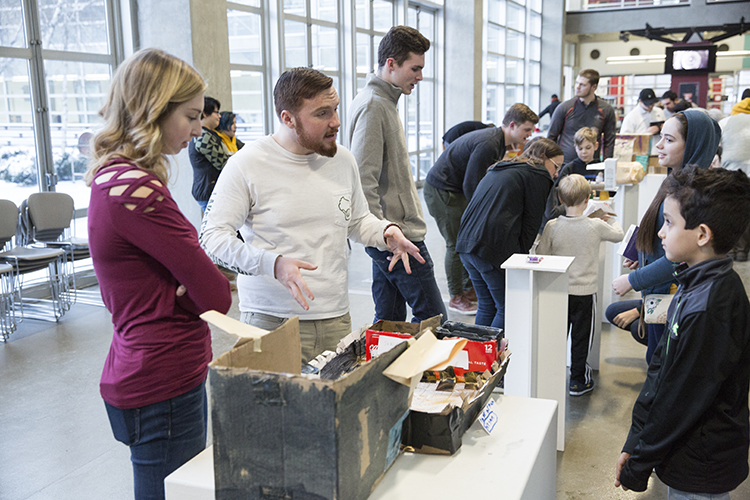 Ben Lang explains a point to Wesam Alkhushayni (right) as Cierra Puls looks on. Behind them, Brett Van Dyck talks with and Eleanor Mechler-Hickson about her creation. (UWM Photo/Troye Fox) 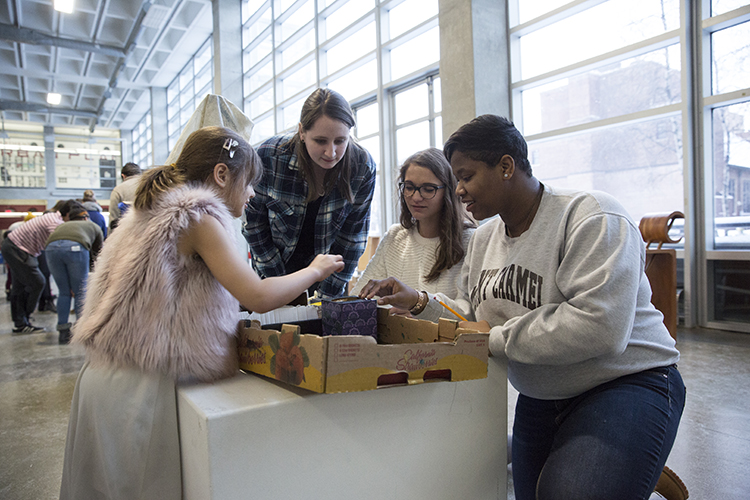 Some of the UWM community’s youngest members are also some of its most creative.

Children from the UWM Children’s Center visited the School of Architecture and Urban Planning in late January and saw a variety of concept chairs designed by undergraduate students enrolled in ARCH 100. After seeing the college students’ chairs, the children put their imaginations to work.

“When we returned to the (Children’s Center) Owl Room, the children began drawing plans and designing their own chairs,” said Sarah Mesa, lead teacher of the Owl Room.

The Owl Room students turned recyclable materials into building materials and made their ideas a reality. Their creations were modeled after the undergraduates’ designs – some chairs were small replicas, others were full-sized and functional, at least for children.

“It’s really awesome how they took an idea in their classrooms and turned them into chairs they actually use,” said Brett Van Dyck, a junior architecture student. “The kids’ aspect (of design) is really cool.”

Six-year-old Madeleine Erickson-Bell constructed a chair with a custom-made seat for her dolls and a lid that flipped closed over the chair, but neither was her favorite part of her creation.

“I like the wheel (on the side) the best. It has my name in different colors,” she said.

Functionality aside, each of the children had a favorite design element to his or her chair. Aseel Alkhushayni and Hudson Casanova, 5-year-old best friends, designed a chair together. Aseel liked the built-in pillow that their chair had, but Hudson liked that it was glittery. Seven-year-old Wesam Alkhushayni emphasized waste management, equipping his chair with a garbage container and a bigger garbage container for larger items.

The experience also prompted some children to consider their future.

“This is a piece of art,” said 5-year-old Vivienne Parente da Costa about her Rainbow Chair, “but I don’t want to be an artist. No way. I want to be a scientist.”

Other children, such as 11-year-old Amea Williams, found a passion for architecture and design from the exhibition. She said that she wants to get good grades through high school to eventually become a UWM architecture student herself.

“Sarah (Mesa) told us that we should make the chair that inspires us,” she said.

That sentiment was held not just by the children of the center, but at least one UWM student as well.

“Sarah is an awesome mentor. It’s really awesome having a lead teacher that you can go to with anything and have your ideas heard and accepted,” said Lucy Seger, primary caregiver in the Owl Room.

The Owl Room is an after-school and summer classroom for children from kindergarten through second grade. However, children from other ages and classrooms, such as the Lynx Room, were involved in the exhibition, too.

The exhibition carries a deeper lesson for the children and UWM’s Children’s Center as a whole. Working with the environment is a fundamental learning principle at the center. Whether that means working with recyclable materials, such as the chair exhibition, or developing a hands-on relationship with nature, the Children’s Center believes it is important for children to be conscientious and respectful of the world’s natural resources. The School of Architecture and Urban Planning is one of the center’s strongest allies in that learning goal, too.

“The School of Architecture and Urban Planning provides lots of extra, recyclable materials we can use in the classroom,” Mesa said. “We really get a lot of support for sustainability and conservation from the community.”

The exhibition wasn’t the first time children have had their imagination sparked on UWM’s campus. Over the course of her 15-year tenure with the Children’s Center, Mesa has watched children draw inspiration for projects after making trips to Downer Woods, the Kids’ Chemistry lab and other locations across UWM.