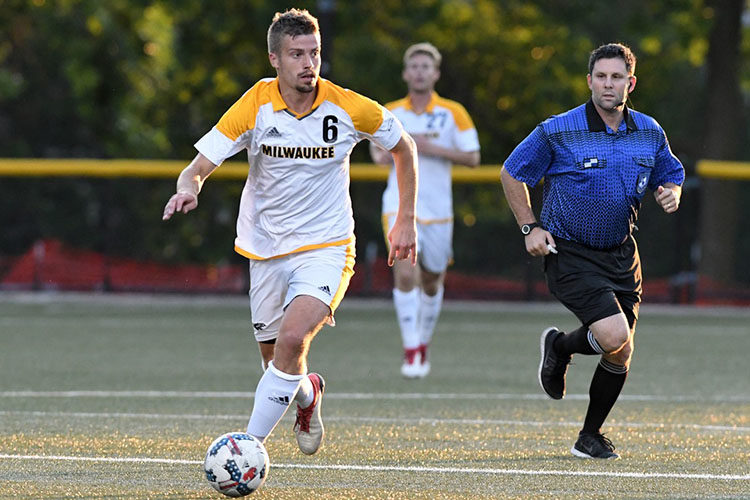 Earlier this year, Vuk Latinovich became only the fifth UWM soccer player to be drafted by an MLS team. (Milwaukee Athletics photo)

When he was a child, Vuk Latinovich enjoyed looking through an atlas, studying the flags and learning about the countries of the world. Playing soccer fueled his interest.

“I think that was partially tied to soccer because there were players from so many different countries, so I always wanted to know where those countries were and what they looked like,” he said.

Those interests came together in a big way at UWM. Latinovich, who played on the university’s soccer team for four years, graduated in December with his bachelor’s degree in history. In January, he was selected in the third round by New York City FC in the 2021 Major League Soccer SuperDraft. He is the fifth-ever UWM player to be drafted by an MLS team.

Soccer has ‘always been part of my life’

Latinovich can’t remember when he started playing soccer. His dad played soccer and his mom was a professional handball player, so athletics were a natural for him. “I saw a tape of me kicking the soccer ball around when I was little. It’s just always been part of my life.”

Even before he started high school at Brookfield Central, coaches were expressing interest in recruiting him for the college level. He committed to UWM in his first year of high school. “I knew the coaches there very well, and it was 30 minutes from home. It was a no-brainer.”

Before heading to UWM, he spent his last two years of high school in Belgrade, Serbia. His mother came to the U.S. from Serbia as an exchange student, so he holds dual U.S.-Serbian citizenship. His parents, who are both dentists, met at Marquette University’s dental school. He has three older sisters and a younger brother.

Going to high school in a different language was a challenge, Latinovich said. “I can speak Serbian fluently, but it was more difficult, more professionalized, because it was in a school setting.”

Excelling on and off the field

At UWM, he excelled both on the field and in the classroom. A midfielder, he was a two-time All-Horizon League honoree who earned first-team all-league and second team United Soccer Coaches All-North Region accolades as a junior in 2019. He missed his senior campaign when athletic events were canceled due to COVID-19 in the fall. A two-year team captain, Latinovich played every minute in 14 of his 20 appearances in 2019, with his 1,810 minutes the most of any field player.

Latinovich made 56 starts in his 57 appearances over three seasons, finishing his career with 33 points on 11 goals and 11 assists. His 162 career shots included five game-winners, highlighted by the game-winning goal against both Marquette and Wisconsin in his final season in a Panther uniform.

He started as a history major, then switched to education because he admired his teachers and had enjoyed working with youngsters as a coach.

He enjoyed his academic experiences at UWM, he said.

“I liked every one of my professors, especially in the history department. I enjoyed every single class. The professors were good, and made UWM enjoyable.”

However, as professional soccer opportunities opened up for him, Latinovich switched his major to history because he felt he couldn’t make a commitment to student teaching while playing at a professional level. Eventually, he said, may return to earn his teaching credentials, he said, but for now he’s excited about being drafted.

“Right now it’s basically a tryout. I’ll have to play my way onto the team. There are no guarantees, but I feel confident about everything. It may sound corny, but it was pretty gratifying to make my family proud.”

Latinovich sees the opportunity as walking on a new path.

“I’ve always wanted to play professionally, and now I have a chance. No one plays soccer or other sports forever; you only have a limited time. If you have a chance, you should go for it.”