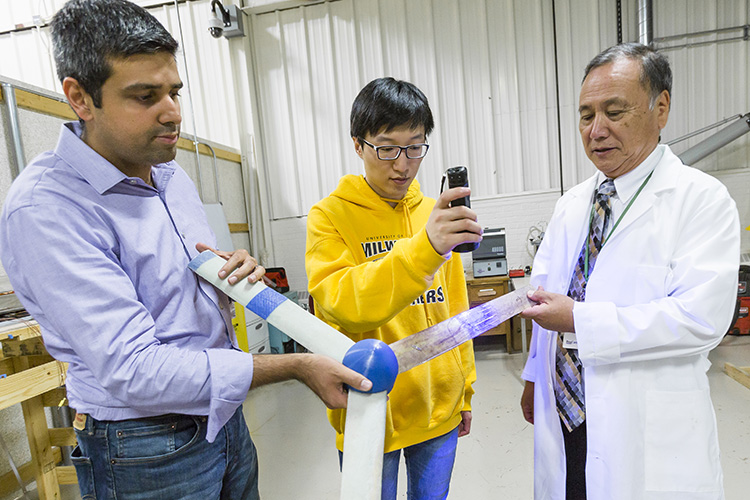 High wind gusts — the very things that allow wind turbines to crank out energy — also pose the main challenge to the success of this green energy source. High winds cause the severe vibrations that can crack wind turbine blades.

Lightning strikes and wear also cause cracks, which lead to down time, diminish performance and, most importantly, become unpredictable safety hazards.

“A small crack can propagate quickly, and it can send debris to the ground, so you want to stop it right at the beginning,” said Ryoichi Amano, professor of mechanical engineering at UWM.

Amano and former graduate student Arun Kumar Koralagundi Matt reimagined the turbine blades’ plastic-like polymer and fiberglass material so that it can stop a crack in its tracks.

“The concept is similar to blood clotting in the human circulatory system,” Amano said.

Replacing a single blade that’s supposed to last 20 years can cost hundreds of thousands of dollars, depending on its size, and the self-healing material can lengthen a damaged blade’s life by several years. Multiple that by the rising number of wind turbines in use, and cost savings add up.

While self-healing has been widely studied and tested in metal composites, Amano is the first to apply the idea to polymer and fiberglass composites for wind turbine blades. In the last five years, his lab members have made strides in finding a mechanism that works.

In the researchers’ design, short lengths of hair-like glass tubing containing a healing agent are inserted just below the surface of the turbine blade, which is hollow. The tubing is placed at a certain depth in the layered shell, which is less than a quarter-millimeter thick. Then the UWM team mixed a common catalyst with an epoxy resin. They evenly distributed it in powder form in the material surrounding the tiny tubing.

A crack in the blade’s surface breaks open the tubes underneath, releasing the healing agent, which reacts with the catalyst from within to create a kind of solder that seeps into the crack and solidifies in a matter of hours.

The self-healing material would not be used throughout the entire blade, he added, but rather in the area most susceptible to cracks. That “vulnerable zone” extends from behind the blade’s “root” — the thick end closest to the center rotor — to about the halfway point.

Before the self-healing material can be introduced to industry, the lab members are addressing a remaining obstacle: Adding the tubing reduces the fiberglass shell’s average tensile strength by 25 percent.

“Anything you place within a solid will affect ductility because it’s not entirely solid anymore,” Beyhaghi said. While the lab members are experimenting with changes in the placement of the tubing to address this weakness, Amano says their self-healing blade is still strong enough after crack repair to give it years of additional life.

“We still recover 90 percent of the blade’s pre-crack strength after it is mended,” Amano said. “And that is amazing.”