Technology surged forward when the U.S. government invested heavily in science and engineering in the 1960s to get humans to the moon.

Now, 50 years after Neil Armstrong set foot on the lunar surface in July 1969, some of the work in UWM labs has the potential to make space exploration safer and transport space travelers even farther.

With private companies now contributing – and shouldering some of the astronomical costs – UWM research could attract the attention of a growing number of interested parties.

Here’s a look at some of that UWM work, featuring materials with remarkable abilities, non-physical radiation shields and manufacturing in space with 3D printing, all of which could well render new ideas for better life on – or off – Earth.

Reuse and recycling pay off 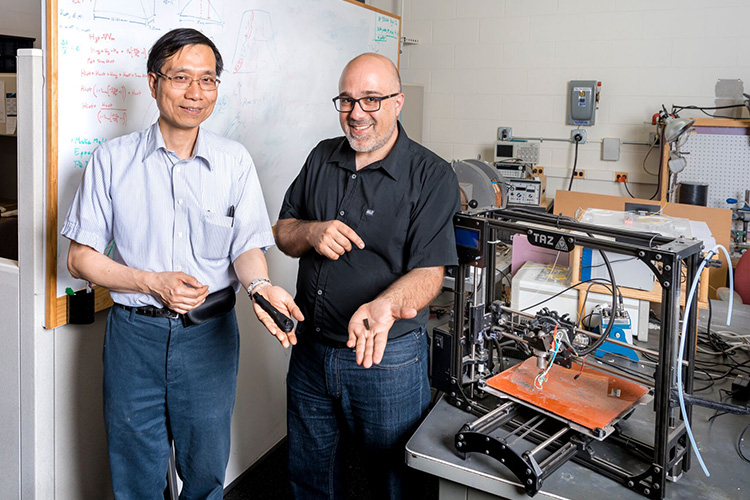 In the past, structural parts of the rocket that propelled the rest of the body and the payload out of Earth’s atmosphere fell back down to Earth and were discarded into the ocean.

Now private companies such as SpaceX, owned by serial entrepreneur Elon Musk, are helping to cut the expense of pursuing space travel, and one strategy is to reuse those parts.

Rani Elhajjar, an associate professor of civil engineering, spent the last two years helping SpaceX overcome problems it faces in advancing the reusability of rocket stages. These large parts are made of a blended material that Elhajjar knows a lot about.

He researches polymer composite materials, including those containing carbon fibers. These composites are super-strong yet lightweight, making them valuable in reducing weight without sacrificing strength in the bodies of spacecraft.

In another project, Elhajjar and Chiu Law, associate professor of electrical engineering, are investigating methods and uses for recyclable 3D-printed intelligent structures. The two are incorporating sensors into parts that are 3D-printed using magnetostrictive composite materials, which change shape in response to a magnetic field.

Magnetostrictive particles are surrounded by a matrix of polymers or nanocellulose – a “pseudo-plastic” derived from wood pulp that is lightweight but exceptionally strong.This makes the sensors broadly useful because they are flexible and can be manufactured in space, said Law. After multiple cycles, you can melt or dissolve them.

“With these you can create coatings that monitor structures for damage and also sense electrical current,” said Law. “That’s important when you have all these electronics in use in a space station or vehicle. You can possibly use them one day to recharge a battery in space.”

An invisible radiation shield to the rescue 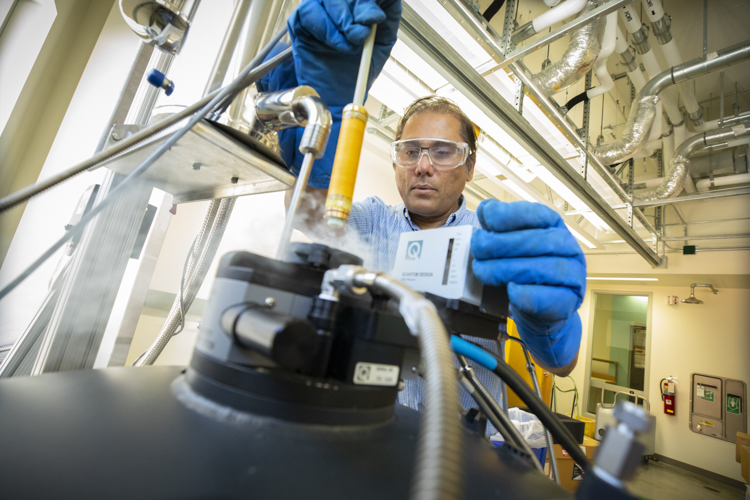 NASA officials say that landing people on the surface of Mars is an achievable goal. But a major barrier is the lack of an effective way to shield people from dangerous high-energy radiation, which bathes outer space beyond Earth.

Lead is one of the few physical materials that could deflect these deadly particles, but it’s too heavy to add to spacecraft.

But members of Prasenjit Guptasarma’s lab, together with NASA collaborators, have suggested an alternative. The Earth is shielded by a magnetic field encompassing the planet. Why, then, couldn’t a magnetic field be created to protect people in the space shuttle?

Guptasarma, a professor of physics, researches unconventional magnetism and superconductivity in materials. He conducts some of the work with a superconducting magnet – an electromagnet that is wrapped in superconductive wire.

Guptasarma’s lab has investigated the feasibility of generating a magnetic shield powered by a superconducting magnet. The current would be initiated on Earth and last the entire journey to Mars.

There are still lots of questions to answer before the idea could be designed, he said. Could deep-space radiation change the temperature at which superconductive properties appear? Could galactic radiation eventually destroy the magnetic shield itself?

To test it further, he will need a high-energy beam of particles that simulates the deep-space cosmic rays. Brookhaven National Laboratory in New York has the right equipment, and Guptasarma is looking for funding. 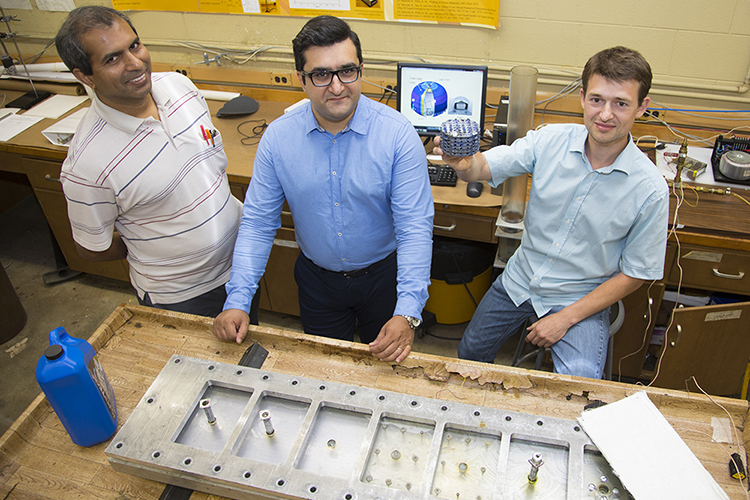 Past space rocket launches have been plagued by fiery explosions that happen as a result of combustion failure.

To avoid disasters, the fuel has to be delivered to a rocket engine in a controlled manner, especially when the rocket moves away from Earth’s gravity, said engineering doctoral student Amin Zarandi (center in the photo above, flanked by Krishna Pillai, professor of mechanical engineering, and Dawid Zimnik, visiting doctoral student).

Rocket fuel tanks are designed for this by including channels filled with porous material, which provide a path for fuel to flow from the fuel tank to the combustion chamber through a process called wicking. Think of it as a liquid moving through facial tissue or a diaper as it is absorbed.

It’s the way that the wicking unfolds that’s really important, said Zarandi, who works in the lab of Krishna Pillai. In one of the two wicking patterns that Zarandi has identified, the porous material is partially saturated and, in the other, the material is fully saturated. Only the latter will result in steady delivery of fuel under any conditions.

Zarandi said the microstructure of the wicking material affects the fuel’s resulting pattern of saturation. His research could enable engineers to “tune” the porous material to improve the fuel-burning process, achieving stable combustion and leading to safer space travel.

Spacecraft that heal themselves 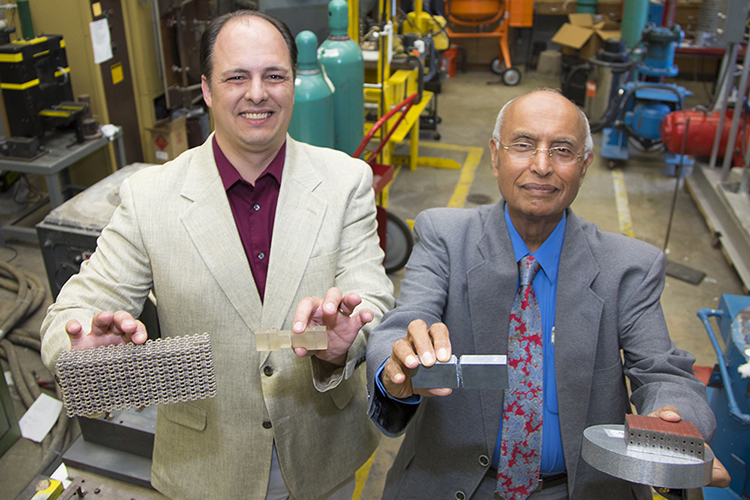 When damage, such as a crack, occurs in spacecraft or facilities in space, you can’t always send out people to inspect or repair it. In the future, you won’t have to. The work of Nathan Salowitz and Pradeep Rohatgi is making those structures safer and easier to maintain.

Rohatgi, distinguished professor of materials engineering, has pioneered the creation of cast metal matrix composites (MMCs), which combine metal with a totally different class of material. Incorporating two materials – the matrix and the reinforcement material – results in amazing structural properties.

MMCs have already been used in space shuttles and the Hubble Space Telescope. And Rohagi’s lab has also developed robust metal syntactic foams that have aerospace uses.

Rohatgi and Salowitz now are researching self-healing MMCs, which can repair damage through various strategies, from integration of nanoparticles to heat.

Salowitz, an assistant professor of mechanical engineering, is incorporating various technologies to create a closed-loop system that continuously monitors the overall integrity of a structure. This kind of system would not only detect damage, but also initiate self-repair and provide feedback on how well the injury was mended.

“I think active materials that can move when exposed to heat or an electrical potential are really cool,” Salowitz said. “Applications, like self-healing materials, can prevent catastrophic failures and make the world a safer place.”