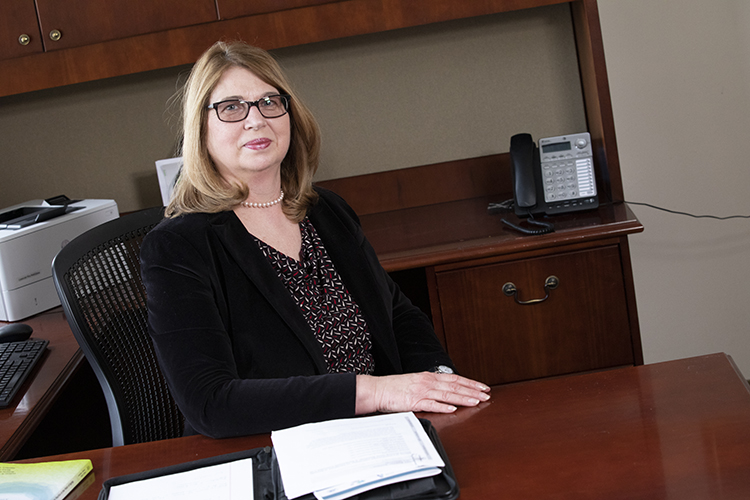 Abuse and neglect of seniors cuts across all groups, and its prevalence is likely to rise as the U.S. population ages, says UWM Professor Colleen Galambos, the Helen Bader Endowed Chair in Applied Gerontology. But there are actions we can take to help. (UWM Photo/Troye Fox)

About 1 in 10 of Americans ages 65 and older experience elder abuse, neglect or exploitation each year, according to the federal Administration for Community Living. Elder abuse occurs in every setting – in the home, in nursing homes and other institutions — and affects seniors in all socioeconomic groups, cultures and races.

To draw attention to these issues, the International Network for the Prevention of Elder Abuse and the World Health Organization at the United Nations in 2006 designated June 15 as World Elder Abuse Awareness Day.

UWM’s Helen Bader School of Social Welfare’s Office of Applied Gerontology presents an educational event each year connected to the day. This year’s forum focused on older adults and hoarding on June 13 at BaderPhilanthropies.

Professor Colleen Galambos, the Helen Bader Endowed Chair in Applied Gerontology, says the prevalence of elder abuse is likely to rise, given the aging of the U.S. population overall. Galambos provides some background and answers questions about the topic.

What is considered elder abuse?

Elder abuse refers to intentional or negligent acts by a caregiver or trusted person that causes or potentially causes harm to an older adult. Forms of elder abuse include physical, emotional or sexual abuse, neglect or self-neglect, abandonment and financial exploitation.

You have the abuse component of it, which can be physical abuse or sexual abuse. Physical abuse refers to battering in the form of unexplained bruises, broken limbs, burns, black eyes, etc. Sexual abuse refers to people who are raped, fondled or exposed to sexually explicit situations against their permission. In many situations, these people are cognitively or physically impaired being sexually assaulted by a neighbor, a care provider or friend, and they have no ability to fend for themselves because they are in a vulnerable situation.

The majority of neglect cases are self-neglect. We would consider it self-neglect if the person is inflicting the conditions on themselves, usually because they have mental health issues, cognitive or physical limitations that prevent them from addressing the problem.

What are examples of the exploitation of older adults?

Elders throughout the U.S. lose an estimated $2.9 billion annually due to elder financial abuse and exploitation, funds that could have been used to pay for basic needs such as housing, food and medical care. Some examples of exploitation are people spending older adults’ money without their permission, coercing older adults to spend money, and then there are organized schemes and frauds to attempt to get the older adult’s money.

There are businesses that will try to get money from older adults or suggest that they need certain products or certain services that are not useful. Older adults that are having  issues with cognitive impairment are particularly vulnerable.  They may not be able to  determine what they need or do not need and because of that, they make unnecessary purchases. Alternatively, they give money away or buy things in order to please someone who is paying attention to them.

A couple of popular frauds are: The IRS fraud where the scammer claims to be the IRS and threatens to put the older adult in jail if their tax bill is not paid. This fraud is very frightening to older adults because they think that the authorities are calling them, and so they send a check to the caller.

There is another fraud where the older adult is contacted by someone who reports that his or her grandchild is in trouble and needs money. The older adult then sends the scammer a check. If we can educate people not to send money to people they do not know, that will help reduce the number of people who are taken advantage of.

Is the prevalence of such abuse expected to increase as the U.S. population gets older?

In terms of demographics, by 2030 there will be more older adults than children under the age of 18. Given these growing demographics, we will see more elder abuse.

What should someone do to report an alleged instance of elder abuse?

If you suspect or know somebody that is in an abusive situation, please contact your local department on aging. They are the agency  designated to investigate and provide intervention in these situations. Or call the Eldercare Locator at 800-677-1116 or go to eldercare.gov to be connected with a local reporting agency.

How does UWM and the Bader School of Social Welfare’s Office of Applied Gerontology promote awareness of issues related to elder abuse?

This office is committed to sponsor an educational event every yearon a particular topic related to elder abuse to raise awareness of the issue. Outreach and education on this topic  is extremely important. The more people that know elder abuse exists and the more understanding there is about this issue, the better place we are going to be in society to be able to address elder abuse.