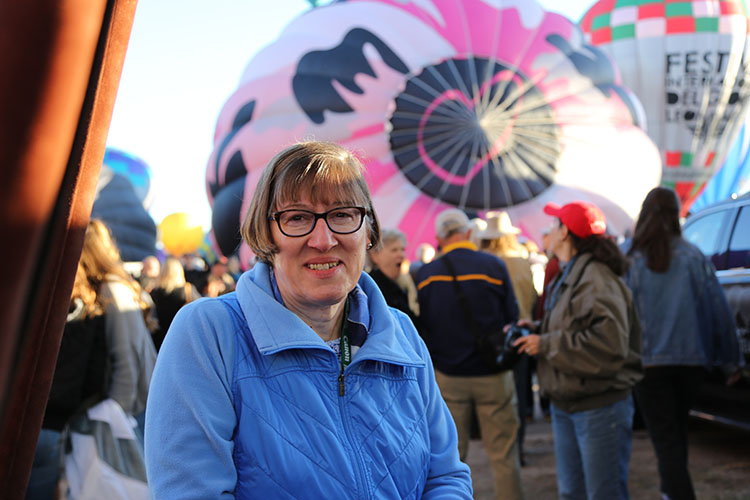 “From the moment I saw balloons, I was hooked on the sport,” says Debbra Spaeth, an alumna of UW-Milwaukee at Washington County and UWM. She was inducted into the Ballooning Hall of Fame in 2018. (Photo courtesy of Debbra Spaeth)

“From the moment I saw balloons, I was hooked on the sport,” says Debbra Spaeth, an alumna of UW-Milwaukee at Washington County and UWM. That hook resulted in a lifetime of ballooning adventures, friends and awards from around the world, and a 2018 induction into the U.S. Ballooning Hall of Fame.

The wide scope of her involvement began as a crew member for other pilots. “The serenity and beauty of a balloon flight” is what drew her into the sport. Before long, she began taking pilot lessons. As a commercial-rated hot air balloon pilot, she flew at events in the United States and later in England, France, Belgium and Japan.

As she was learning to fly balloons, a balloon competition was being planned in her flying area in West Bend. Her strong organizational skills and attention to detail were a perfect match for this event as well as many more to follow over the next 30 years. “A passion for the technical aspects of organizing an event, formulating competitive flights and all the related details” kept her involved for the next 30 years, organizing competitions from Wisconsin Dells to Japan, Spaeth said.

She wrote the book

In addition to piloting and organizing competitions, she literally wrote the book on observing and officiating. Spaethis author of the 1978 BFA Observer Handbook and co-author of the Gas Balloon Observer Handbook for the 1990 World Gas Balloon Championship.Despite her sometimes very hectic schedule – such as organizing and officiating Kodak’s celebration of 100 years of the snapshot, with 100 balloons flying in three cities over two weeks – she was never fazed.

As a former secretary-general of the International Ballooning Commission and past chair for the BFA Operations Committee, she remains active in both organizations. A recent speaker at the Balloon Event Symposium, she enjoys sharing her expertise with others. While she currently does not have a balloon to fly, Spaeth continues to officiate at balloon competitions.

A chance to build relationships

The “friendships and variety of people I have met” are what she values most from her lifelong hobby.

“Without ballooning as the common thread, I would never have had a chance to meet those people — from Gary Britton (her college math instructor and balloon enthusiast) to Malcolm Forbes,” Spaeth said.

Her goal in life “has always been to be the best version of me, every day,” she said, and this holds true beyond ballooning.  After earning her associate degree at the Washington County campus in 1976, she completed her college education at UW-Milwaukee’s main campus, earning a Bachelor of Business Administration degree in 1978. Later, she completed an MBA at Marquette University.

To support her ballooning hobby, Spaeth works as a manufacturers’ sales representative in the telecom and cable TV industry. As president of SSA/Sheppard Spaeth Associates in West Bend, she manages a five-state area, putting her organizational and detail-oriented skills to good use every day.