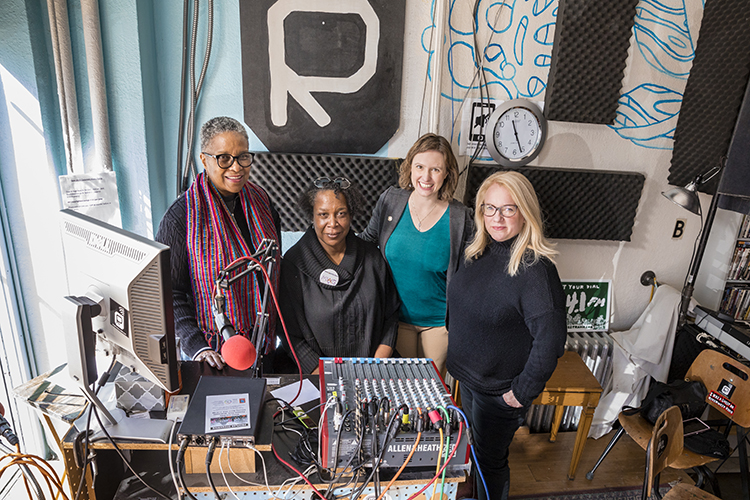 After losing her only son in a shooting in 2003, Debra Gillispie began fighting for responsible gun laws. But it was when she launched a show on Riverwest’s community radio station last May that she discovered the healing effects of telling stories of gun violence for survivors.

“It also helps the listeners by giving them the opportunity to see these survivors as human beings – ordinary citizens – and not statistics,” Gillispie said.

Voices of those who have experienced gun violence in the U.S. are a critical missing piece in the highly charged political discussions over gun control, said Leslie Harris, an associate professor of communication at the University of Wisconsin-Milwaukee.

Harris and her UWM colleagues are attempting to break the public debate impasse by teaming up with Gillispie to launch the Gun Violence Project. The aim of this interdisciplinary, university-community collaboration is to share stories of gun violence in the Milwaukee area.

The team members hope to recover experiences that are not recorded in official documents – accounts of not only loss and its domino effects, but also of resilience and the impacts of both on neighborhoods.

Available to the public

Collected stories will be available to the public on an interactive website containing short, high-quality audio stories, transcripts and a multi-modal map so that viewers can correlate the stories with geographic locations. The researchers plan to have all aspects of the website available by September 2020.

“Statistics don’t give us enough information,” Harris said. “The meanings of spaces and the ways that we live in them and move through them are impacted by gun violence. For example, for many area high school students, going to school is frightening because it has become associated with gun violence.”

Using the raw audio files and the transcripts, the researchers will condense many of the stories to between two to five minutes. Cobb also will produce three, 10-minute stories that feature multiple perspectives or additional richness.

Harris and colleagues envision the website will be used for discussion and scholarship. They eventually hope to expand the stories on the website and offer it as a model for other cities.