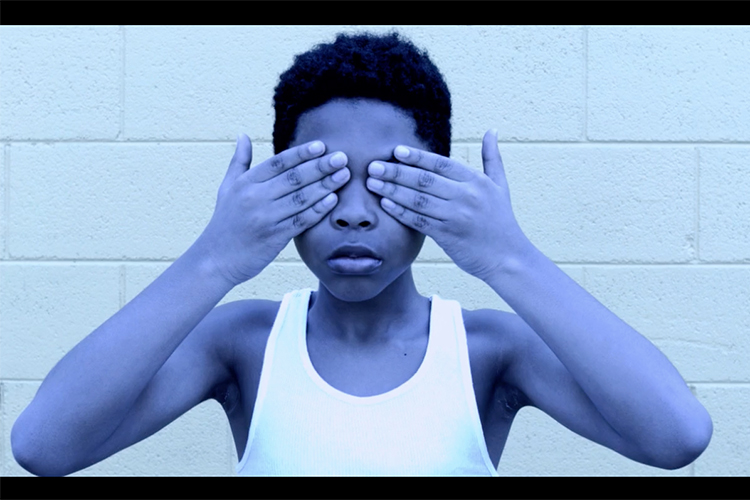 This still is from “Remnants of a Room,” a film created by Vonnie Quest, the alter ego of UWM grad Devon Smith. The film has been screened in several cities, including Washington, D.C., at the Smithsonian African American Film Fest.

Devon Smith cannot remember a time in his life when he was not an artist. At the age of 3, he started to draw. As he became older, he became interested in writing stories and learning how they tick.

“The more you grow and mature, the more you become interested in other mediums, other art practices,” Smith said.

Devon Smith is a UWM Peck School of the Arts alum, class of ’17, who has combined his love for film, visual art and teaching by working as a program specialist at Rebound: Alternatives for Youth in Durham, N.C. He created the Afro+ProjectionLAB to get high school students to learn about and engage with black experimental cinema. His films have been shown in film festivals across the nation, including at the Smithsonian African American Film Fest.

“He is one of the most genuine people I know,” said Natalie Reinbold, program director of the Life Impact program at UWM. “He enters into all things with an open and honest heart.”

Reinbold worked closely with Smith his senior year as his life coach. “He is willing to ask for help when he’s struggling and has a calm and gentle nature, making everyone around him really comfortable in his presence.”

Smith’s passion for working in multiple mediums never faded as he pursued an inter-arts major at Peck School of the Arts with two emphases: visual art and film production.

“I love film, but I don’t want to be just a filmmaker,” Smith said.

Passionate about giving back

Early in his college career, he was looking for a job while attending UWM and chose the Boys & Girls Clubs of Greater Milwaukee since it fit with his school schedule, although he had never taught. There, Smith learned from his work with inner-city youth how much joy teaching can bring.

He was placed in after-school programs involving elementary school students. “I fell in love with the work,” he said.

Over the years, he worked at after-school programs in several organizations in Milwaukee, including the Silver Spring Neighborhood Center and the COA Youth & Family Centers.

“By the time of my senior year, I was working with high schoolers. That was when I was like ‘OK, this is really cool,’” Smith said. “I felt like there was a connection a little quicker.”

In the middle of his sophomore year, Smith’s life turned upside down when he found out he was going to be a father.

“It was difficult, but not as difficult as some. I will say that I had a really great support system at home,” Smith said. “When we all found out this was something that was happening, we all pitched in, and without them, it would’ve been a lot harder.”

After the birth of his son, finances became tight, which is one reason why Smith applied to the Life Impact program his junior year.

The Life Impact program is a renewable scholarship for students who are also parents to help them achieve higher education. All scholarship recipients have access to life coaches to help them guide their way through their college career.

“Working with him was such a joy, because he came to all his appointments ready to laugh, share and learn,” Reinbold said.

At the Life Impact graduation, Reinbold noted how Smith had a small entourage to celebrate his success in finishing his bachelor’s degree.

“It was so wonderful to see so many people rally around this bright, creative and talented young dad,” Reinbold said.

Smith moved to Durham, N.C. There, Smith has a day job working with high school students who have been suspended from school.

“Some of the comments that the students have made to me have been really rewarding,” Smith said. “Knowing that we care about them is very important to us.”

Smith’s alter ego when creating films is Vonnie Quest. The most recent film that he has been touring around to film festivals is titled “Remnants of a Room,” which is about his father’s paranormal encounters as a child. The film was made while he was a Peck School of the Arts student. The film has been screened in Milwaukee, Washington, D.C., Chicago, Durham and Denver.

“Lately much of my work has been about my family history,” Smith said.

He is excited to move onto the next big chapter in his life: to get his Master of Fine Arts degree. He has been accepted at University of North Carolina at Chapel Hill for an MFA in Studio Art.

“I am planning on making meaningful work that will offer my audience and community memorable experiences,” Smith said.