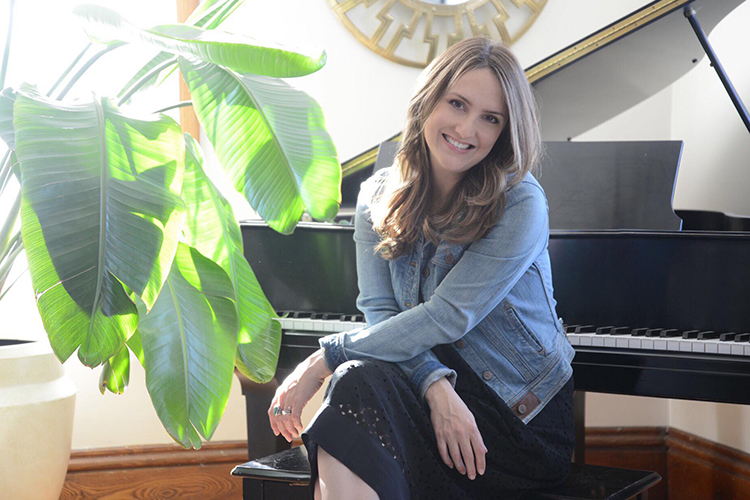 Elizabeth Cramer earned two degrees from UWM — a bachelor’s degree in music in 2004 and a master’s in educational psychology in 2008. (Photo courtesy of Elizabeth Cramer)

From humble beginnings as a small-town country girl growing up on her family’s farm in New Holstein, Elizabeth Cramer never imagined a life that would allow her to share her love for Wisconsin as she does.

Cramer, now a co-host of “Outdoor Wisconsin,” which airs on PBS stations statewide, travels across Wisconsin offering her perspective on the joys of the state and what makes it unique.

When Cramer left her small-town farming roots, she left behind the two-room school in Calumet County and welcomed the change to big city campus life in Milwaukee at UWM.

“I was a country girl the whole time, even when I was living in the city,” said Cramer.

Cramer graduated from UWM in 2004 with a bachelor’s degree in music and earned her master’s in educational psychology in 2008.

She used her studies in music composition to teach others how to play the piano. She also played gigs throughout Milwaukee and began networking with people in the city who would later help her build her career.

With connections and resources that she had built at UWM, Cramer was offered a job with Fox World Travel as a tour host. She has guided groups across the globe, including Ireland, Hawaii, Alaska, Iceland and Australia.

“It is absolutely the best job in the world,” Cramer said. “But it can also be stressful. These people have invested so much into these trips, and I want to give them the best experience possible in all of these unique locations in our world.”

As she traveled across the globe, Cramer honed her media skills, hoping to find a way to tell her stories.

“I reached out to PBS and shared my photos and videos,” Cramer said.

Impressed with her photographs and personality, PBS hired her as a part of the “Outdoor Wisconsin” production team alongside co-host Dan Small.

First duty — jumping out of a plane

Cramer’s first pitch took her to an airfield to skydive with a man who had recently survived a near fatal accident while parachuting earlier that year. Not to be discouraged from something he loved, he planned to return to the location where his accident occurred, and he invited Cramer to join him.

Feeling the pressure of filming her first episode for PBS, Cramer took on the challenge of a tandem jump with him and shared his story of overcoming the odds of surviving such a harrowing accident.

The episode shaped a different approach for the program and left her cohost, Dan Small, impressed.

“Elizabeth has been a wonderful addition to the Outdoor Wisconsin team,” Small said. “From her first segment on skydiving, I knew she was a keeper. I know our viewers can’t wait to see what she does next.”

“Her energy and enthusiasm are clearly evident in the segments she produces,” Small added. “She has become our resident daredevil, fearlessly tackling every assignment, from dogsledding and ice fishing to climbing Mount Kilimanjaro.”

Cramer dreamed of Mount Kilimanjaro as a child and wanted to share her expedition with her newfound audience. After she got the go-ahead from PBS for the episode, she recorded her preparation in state parks throughout Wisconsin her ascent by herself on a GoPro camera for an episode.

“It was lifelong dream to do that,” said Cramer. “Afterwards, I found myself crying several times during plane flight home with the realization that I had accomplished this amazing, lifelong dream.”

Cramer also recently ventured up north to Chequamegon Bay on Lake Superior to record an episode about several women who gather to celebrate the culture of ice fishing.

With below zero temperatures, Cramer bundled up in her parka and discovered a passion for the pastime that often keeps even the most hardened outdoorsman inside next to their woodstove.

“She is extremely engaging and interested in new opportunities,” said Hannah Stonehouse Hudson, a member of the Wisconsin Ice Angler Project, an organization that strives to get more women involved in the sport.

“She inserted herself right into our group as if she had always done it (ice fish). She fit right in with us and didn’t allow the harsh conditions scare her off the ice.”

Often recognized for her work on “Outdoor Wisconsin,” Cramer is regularly asked how she has achieved so many of her goals. She says that she finds her answer very easily.

“UWM gave me the tools and connections to develop my talents and the confidence to share them around the world.”