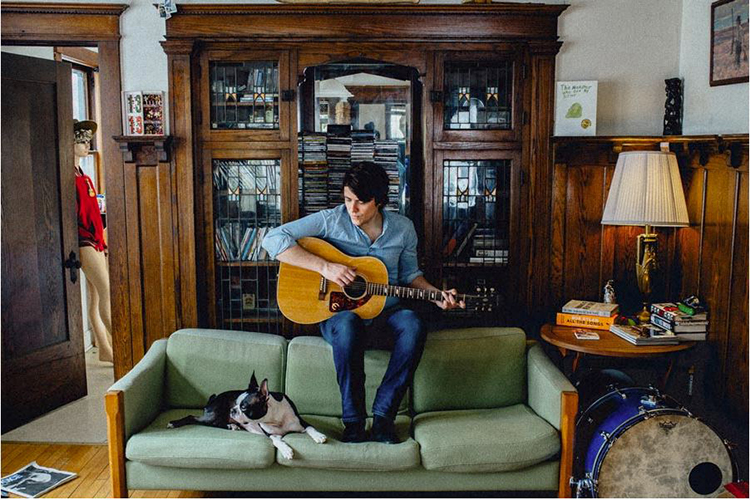 He may have been raised in Minnesota, but Bob Dylan had a fondness for Wisconsin. More than 50 years ago, he wrote out lyrics for a song, “On, Wisconsin,” as a love letter to the state. Decades later, singer/songwriter and UWM alumnus Trapper Schoepp put Dylan’s words to music and in July, released a music video of the new/old song featuring famous Wisconsinites.

Schoepp, a 2013 graduate who majored in journalism, advertising and media studies, sat down recently to talk about about his and Dylan’s labor of love.

How did you come to write the music to Bob Dylan’s lyrics?

One day I woke up and I’m scrolling through Facebook and see the news article that would forever change my life. It was a Rolling Stone article saying that a long-lost Dylan song about my beloved home state of Wisconsin was unearthed and put up for auction for $30,000. The photograph showed two pages of hastily scribbled lyrics. The pages were torn, sepia-toned, and the ink was fading, barely clinging onto the page after over half a century.

I had a sinking feeling in my gut that told me I needed to finish what was started. I made a pot of coffee, sat down at the piano and tried to get inside of a song that Dylan started 57 years ago. The song is written from the perspective of a lonesome drifter like in an old Woody Guthrie song, where the singer is imagining a happy homeland filled with Wisconsin’s finest exports: milk, cheese and beer. I immediately connected with it. I ended up adding a chorus inspired by my state’s fight song, “On, Wisconsin,” and recording it with my band that weekend – going entirely off that photograph of faded lyrics.

Months later, I received an email from my manager simply stating, “Dylan has it now.” Through a series of Hail Mary passes, he’d begun talking with Dylan’s team about the possibility of me and the Nobel Prize winner publishing the song together for the first time. But hours turned into days, days turned into weeks, weeks into months. I figured my hero didn’t fancy our take. But then I get a ding on my phone and voila! I get an email saying Dylan had signed off on it. For a Wisconsinite raised on Dylan’s music to now share a songwriting credit with him in a song about Wisconsin seemed stranger than fiction.

Dylan was a personal hero of yours growing up. This must have been a wonderful “full-circle” moment for you.

After a series of bad BMX bicycle accidents, my mom signed me up for guitar lessons. From there I heard Bob Dylan’s “Hurricane” in a music video and it lit a fire in me.

I grew up in small Wisconsin town just a few miles from Highway 61. This is where I’d take the deep dive into Dylan’s world of folk songs, alluring Shakespearean characters, twisted Biblical imagery, and the urgency of the Civil Rights movement. My brother and I began with a boxset of early Dylan gifted to us by our dentist, who was surprised we’d expressed interest. We heard the question Dylan famously asked the world in 1963, “How many roads must a man walk down before you call him a man?” Dylan had a line of inquiry: “Who killed Davey Moore? Why? And what’s the reason for?” But I had questions, too. Who is Hattie Carroll? Where is Desolation Row? What’s so funny about “Talkin’ John Birch Paranoid Blues” anyway? Dylan addressed societal sentiments and inspired me in ways a history book never could.

This video is basically your own love letter to Wisconsin. How did you arrange so many famous faces to appear?

It was a year in the making. I wanted to highlight public figures and everyday people of Wisconsin in an unpretentious way. It was a monumental task in tracking down all 70 participants, but I thought Dylan’s official imprint on this state made it worth it. One guest led to the next. Many of the more prominent figures like Russ Feingold are Dylan fans, so I couldn’t help but ask.

One of the people who appears in your video is UWM’s own Marc Tasman, a senior lecturer in the Journalism, Advertising, and Media Studies department. What drew you to UWM and journalism?

My brother and bassist Tanner Schoepp went to UWM the year before, so I followed in his footsteps. Telling stories is in my DNA. My grandpa was a South Dakotan farmer with a knack for telling tales both tall and true. Journalism felt like an extension of this family trait and my music. I wrote about music at the UWM Post newspaper for years, as well as worked as a production assistant for WUWM’s Lake Effect.

You also earned a certificate in Rock and Roll Studies while you attended UWM. Can you speak a bit about your experiences with those classes?

Through this program I met a living embodiment of rock ‘n’ roll, Dr. Martin Jack Rosenblum. Known as the Holy Ranger, Marty was a professor, biker poet and mythological mentor to myself and many others. I gravitated towards him and his classes, which gave me a sense of belonging at UWM. His appreciation for the folk process, as well as artists like Dylan and Springsteen, was infectious. With his guidance, I got a Certificate in Rock and Roll Studies for my analysis of early folk and blues music. We studied folk music in a way that’s typically only reserved for classical music in academic circles.

Marty passed a few years ago, and it’s left a hole in my heart. When I got the contract from Bob Dylan’s lawyers about a joint publication of “On, Wisconsin,” I printed it off and signed it on his old office door at UWM. My final assignment, if you will.