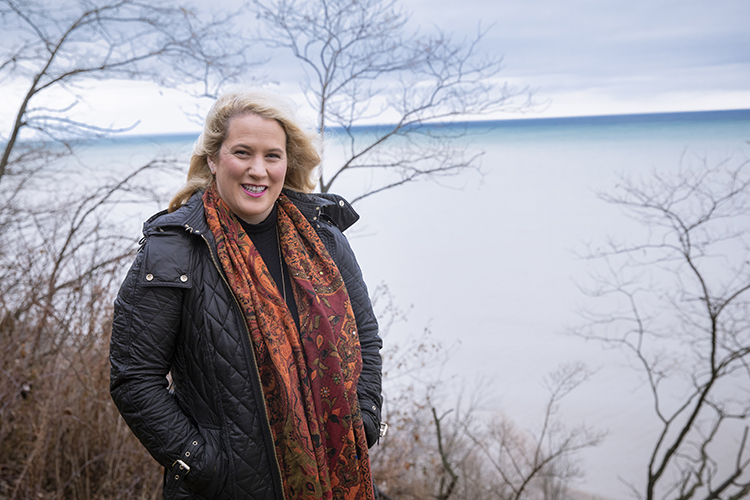 Katie Hall’s friends and family worried about her future when she started to focus her studies on water research and policy.

“You’ll never make a career in water,” they told her.

Most recently her expertise as a research assistant got a shout-out from bestselling author Seth M. Siegel in his new book, “Troubled Water – What’s Wrong with What We Drink.”

“Not a day goes by when she doesn’t teach me something new about the world of water and unearth some source that perfectly makes the point,” the author wrote in the acknowledgements.

Siegel will be talking about the book Dec. 4 at 6 p.m. in the Wisconsin Room of the Student Union as part of the Master Chats series.

Hall’s interest in water comes naturally – her father served in the Coast Guard, and she grew up in Milwaukee enjoying the Great Lakes and Wisconsin’s abundant water-based recreation opportunities.

It wasn’t until she took a course in Jewish Studies while majoring in political science at UWM that she began to think about the laws, policy and issues surrounding water.

Her professor talked about the role water played in the politics of the Middle East, and that led Hall to Siegel’s book “Let There Be Water,” which uses the example of Israel to focus on the growing global water scarcity and his concern that world leaders were not paying enough attention to the issue.

Hall decided to pursue her interest in water through UWM’s Master of Sustainable Peacebuilding program. Tim Ehlinger, an associate professor in the College of Nursing who heads the program, encouraged her.

“He helped shape my curriculum and my career goals and mentored me,” Hall said. The program provided a core of courses but offered Hall the flexibility to concentrate on areas such as water issues and policy.

While still at UWM, Hall participated in a six-month program studying water innovation through the Harvard Business School and the Massachusetts Institute of Technology. She eventually also earned an MBA from UWM.

When she completed her studies, she started working as a policy and research coordinator at the Milwaukee Water Commons, a nonprofit focused on educating students about environmental concerns and solutions.

About the same time, Siegel had connected with UWM’s School of Freshwater Sciences when a woman from Milwaukee heard him speak about water issues in Austin, Texas. He was planning a talk in Milwaukee a few weeks after, so the woman, whose family had been donors to the university, invited him to take an earlier flight and visit the school. He became a senior policy fellow, and Hall became his research assistant. Their work was supported through the Daniel M. Soref Charitable Trust.

“Troubled Water” grew out of public interest in water issues after his first book was published, said Siegel. Media interviewers and people who attended his talks were asking not just about water quantity, but about quality. Siegel, a lawyer and activist as well as an author, decided to tackle the issue, focusing on the U.S.

The book took three years and involved 125 interviews with scientists, government officials, environmentalists, water system managers and researchers. Among those interviewed was Rebecca Klaper, professor and director of the Great Lakes Genomics Center at the School of Freshwater Sciences. She researches emerging contaminants like nanoparticles and pharmaceuticals in the water.

“Legal does not necessarily equal safe”

A key point of the book, said Siegel, is that “legal does not necessarily equal safe. That just because the EPA (Environmental Protection Agency) was created doesn’t mean it is adequately protective of our health. We are badly in need of an overhaul of the drinking water standards.”

As Siegel noted in the book’s introduction, “With more than 120,000 chemical compounds, pharmaceutical products, and plastics now in commerce, the EPA has only designated about ninety of them as problematic enough to be called ‘regulated.’” In fact, Siegel added, despite thousands more potential contaminants coming to market each year, the last time any new contaminant has been regulated is 23 years ago.

That’s in spite of technologies and methods that could reduce some of the ever-growing number of contaminants that get into the water supply, said Siegel. “I don’t think we’re being adequately protective of public health.” Factors like politics, costs, bureaucratic lethargy and public indifference challenge efforts at improvement.

Crises that attract media attention – like lead in the drinking water in Flint, Michigan, and a contaminant linked to cancer in the small New York town of Hoosick Fall – sometimes highlight the issues.

“A crisis sometimes focuses people’s minds,” he said, “but I’m hoping a book like mine will be stimulus enough. We don’t want to wait until it’s a full-blown crisis to take action.”

Siegel also points out that in addition to immediate threats some contaminants can cause longer-term effects like lower IQ or endocrine system disruption that affect developing babies, children and even their children.

For the near future, Hall plans to continue working with Siegel. He’s planning another book and has set up a nonprofit, The Troubled Water Fund, to work on water-related issues.

“I believe so much in the message of “Troubled Water: What’s Wrong with What We Drink,” so it’s easy to promote it,” Hall said. “We are facing many challenges with our water, many that are not getting the attention they deserve. I think it’s really important to have someone like Seth to be a voice for that.”