Willem Dafoe’s long, illustrious acting career has taken him from the stages of UW-Milwaukee to now, finally, the famed 30 Rock stage of “Saturday Night Live.”

Dafoe will make his debut hosting SNL on Jan. 29, with musical guest Katy Perry, the show announced this week.

Dafoe, 66, has been on a run of success in recent years, scoring best actor Oscar nominations in 2018 and 2019 for “The Florida Project” and “At Eternity’s Gate,” and stealing the show in the holiday season’s biggest hit, “Spider-Man: No Way Home,” which recently became the eighth highest grossing film of all time. One of Hollywood’s busiest actors, he also plays memorable roles in 2021 films “The French Dispatch,” “Nightmare Alley” and “The Card Counter.”

Dafoe credits his time at UWM as being formative to his future career in film and on stage. He recounts his time at UWM in this UWM Report profile from 2018, which also includes remembrances from his UWM theater teacher and director and from a UWM acting contemporary of his.

You can also check out this playlist of videos from Dafoe’s performances at UWM and a this gallery of photos from then and now.

To see more videos of Willem Dafoe from his time at UWM, check out this YouTube playlist. 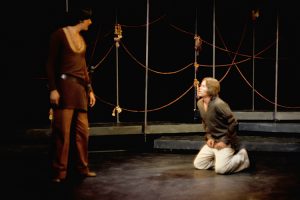