A group of UWM physicists has made it possible to create three-dimensional movies of some of the smallest machines of life.

“With this method, we are in a position to watch tiny biological ‘machines’ perform their functions,” says Abbas Ourmazd, distinguished professor of physics. It’s allowed a Nobel laureate to watch how a molecule reads genetic code to tap out proteins, and other scientists to see a virus preparing to infect a healthy cell.

Such unprecedented movie-making was achieved using math, or more specifically, data science. Researchers in Ourmazd’s lab developed a new generation of powerful algorithms that reconstruct images in sequential order from an ocean of unsorted noisy data. 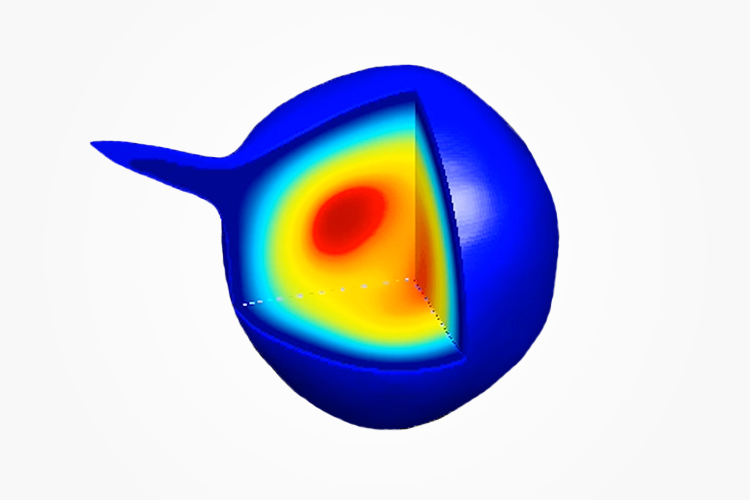 Play Video
Watch a virus extrude its genome as it prepares to infect a healthy cell. In this video, the genome consists of double-stranded DNA which initially occupies the center in red. The video created at UWM captures the DNA spreading from the inner cavity of the virus to a point in the virus’ outer shell where the tubular structure is forming. The final scene is of the virus emptying its genome, which is evident from the diminishing red color.

That’s how Ourmazd’s lab made movies with Joachim Frank, who won the 2017 Nobel Prize in chemistry for developing cryo-electron microscopy. This technique uses beams of electrons instead of light to take snapshots of frozen molecules, producing multitudes of high-resolution, 2-D views. The new algorithm then properly arranged those random snapshots to compile 3-D movies of functioning molecular machines.

The Ourmazd team also worked with the SLAC National Accelerator Laboratory and its X-ray free electron laser (XFEL) at Stanford University. The XFEL’s intense X-ray flashes produce “photos” through diffraction. In this instance, the X-rays hit a virus and scattered into particular patterns, which provided millions of data points for the mathematical reconstruction.