More than 1,000 undergrads are involved in research each year, and half of graduating seniors have research experience.

This year, seven students were honored with Senior Excellence in Research Awards, which provide seniors who have been significantly involved in research with $5,000 in support for their final undergrad year.

This year’s award winners are good examples of the variety of research students are involved in. 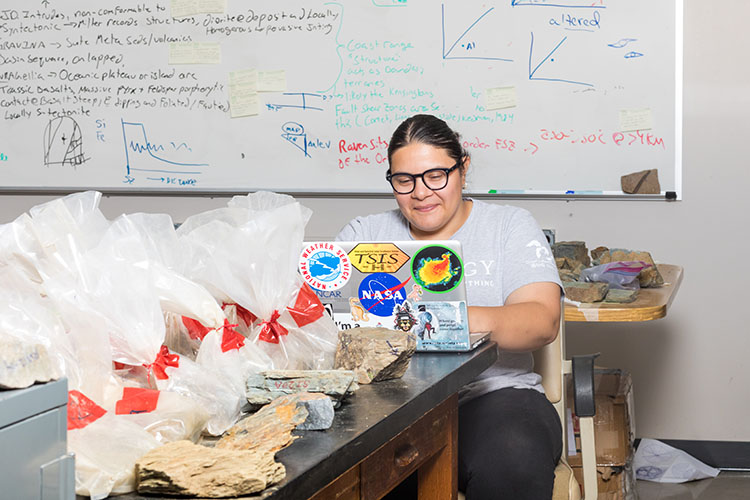 Nancy Duque is analyzing how fluids affect rocks through extreme heat coming up through the Earth’s crust and clashing tectonic plates. The rocks are part of the sample that her mentor, Dyanna Czeck, associate professor of geosciences, brought back from a research trip to southern Spain.

Duque, who had earned an undergraduate degree in physics in her native California, came to UWM after she decided to switch to geosciences as a career. She was looking for a program where she could complete a second degree without totally starting over, and found several in Wisconsin and Minnesota. Her boyfriend, a UWM alum, pointed her to Milwaukee, and it proved a good fit, she said.

Duque become interested in geosciences because it combined her interest in science with her love of the environment and the outdoors. “UWM and the Geosciences Department have been so supportive,” said Duque. “I love the atmosphere here.”

Czeck accepted her into an advanced class after only one basic geology course because of her physics background, and has also encouraged her interest in research. Duque plans to graduate in December 2018 and has already been accepted into the geosciences master’s program at UWM. 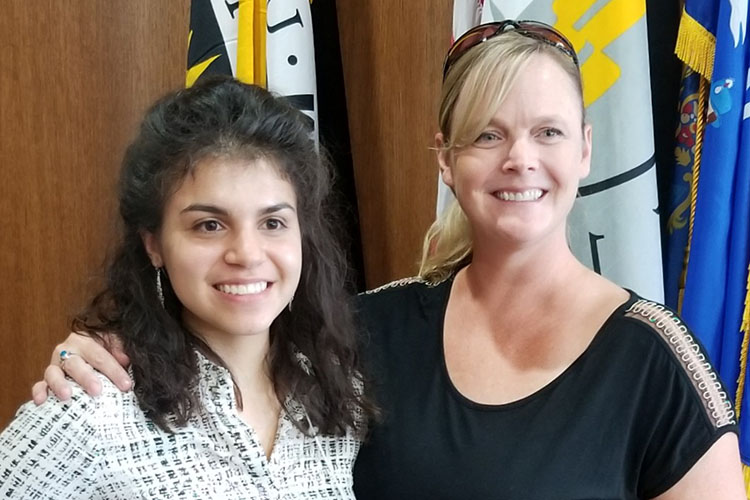 Kristen Leer is interested in researching the transitional periods in child development, specifically on how and why children are exposed and adapt to specific traumas in their lives.

She is working with Krista Lisdahl, an associate professor of psychology, studying different connections between youth and their exposure to substance use. She also works with Tina Freiburger, a professor of social work, investigating the impact of the opioid epidemic in Milwaukee and its impact on youth.

Leer has done her research through the Support Undergraduate Research Fellows and McNair Scholars programs. She is currently working on her Honors College senior thesis on the evolution and cultural impact of schizophrenia.

As a first-generation student, her goal is to earn her doctorate in clinical psychology and serve as a bridge between academia and the general public. Her undergraduate research has given her the opportunity to present at conferences and make contacts in the field, she said.

“It’s really rewarding. I feel like you learn a lot more with research than just in the classroom. It’s hands-on and satisfying.” 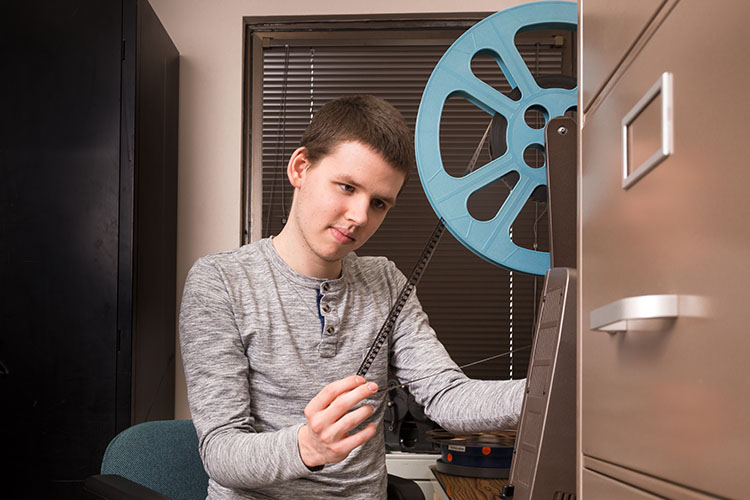 Hugo Ljungbäck’sresearch focuses on the history of film studies over the past 50 years. Last year, he gave a presentation on “What We Can Learn from a History of Film Studies” at the undergraduate research symposium. He later developed that presentation into a talk for a professional conference. Together with Christian Balistreri, who has now graduated (’18 BA Film Studies and English), he spearheaded a project to preserve and restore a long-forgotten 16-millimeter film archive in Curtin Hall and found a home for it in the Center for 21st Century Studies.

Of particular interest at UWM is the Patricia Mellencamp collection, named after one of the founders of the film studies program, which was one of the first programs of its kind in the country.

“Hugo has been researching the history of our film studies program and Pat’s foundational role as a first-generation film studies scholar,” said Tami Williams, film studies associate professor and an expert in film history who is Ljungbäck’s research mentor.

In his job as a video intern in UWM’s University Relations, Ljungbäck has also preserved and restored old videotapes, including a recording featuring then-UWM student Willem Dafoe, who was nominated for Academy and Golden Globe awards earlier this year. A story about Dafoe’s time at UWM, which included the video clips, was picked up by local and national media. 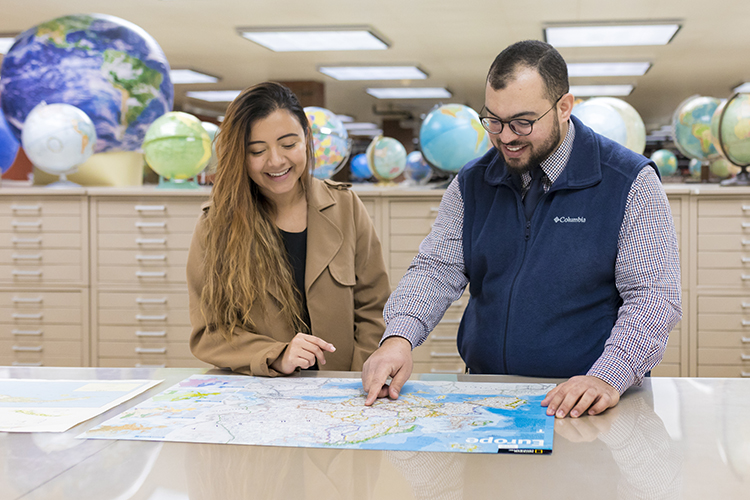 Diana Rivera became interested in access to health care when she took part in a student movement fighting the privatization of one of the only public hospitals in her hometown in Colombia.

“I used to do volunteer work at the public hospital, and it was pretty obvious to us that a lot of people who come from different backgrounds or situations wouldn’t be able to afford private health insurance.”

Interested in eventually earning a graduate degree in occupational therapy, she came to UWM at age 20.

“Then I found out UWM was big on research,” she said. “I realized you could do research on any area you were interested in.”

Working with mentor Mustafa Hussein, assistant professor in the Zilber School of Public Health, Rivera started researching health systems around the world, working with a data set that included 200,000 people in 40 countries.

This year she has pursued research on health literacy as a McNair Scholar as well as through the undergraduate research program.

Her long-term goal is to double major at the graduate level in law and public health so she could continue to advocate for changes to the system both in the U.S. and Colombia. 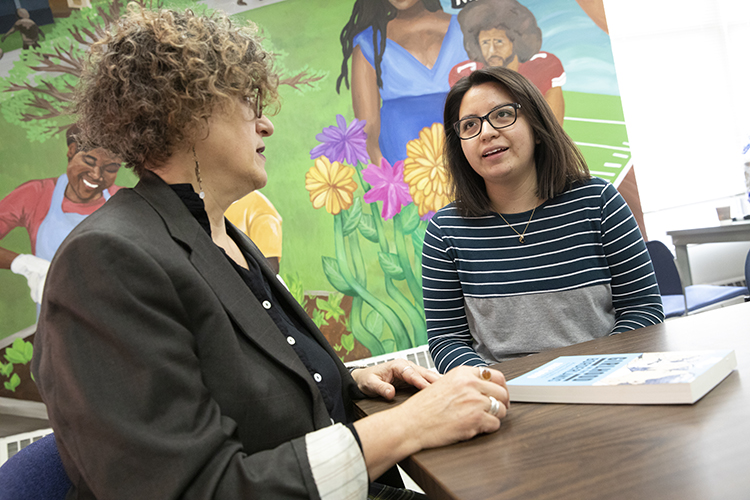 Margarita Garcia-Rojas changed her career direction when she took an ethnic studies class from Rachel Ida Buff, professor of history. Then a biochemistry major, she began reading stories about immigrants and refugees.

“The first time I read the literature, I could see myself in those stories,” said Garcia-Rojas, who came to the U.S. from Mexico with her family when she was 5. Her interest led her to switch her major.

Her research work has involved helping document deportations as part of the Documenting Deportation Database, an international partnership between librarians, archivists, scholars and students. The database documents incidences of arrest and deportation occurring in the United States since Jan. 21, 2017.

She is also working to help develop oral histories capturing the experiences of individual immigrants and refugees.

“By documenting the experience of individuals and the impact migration has had on their family, community and personal life, we can provide an understanding of the consequences and responses of living under a government with an outdated immigration policy,” she wrote in a summary of her research. 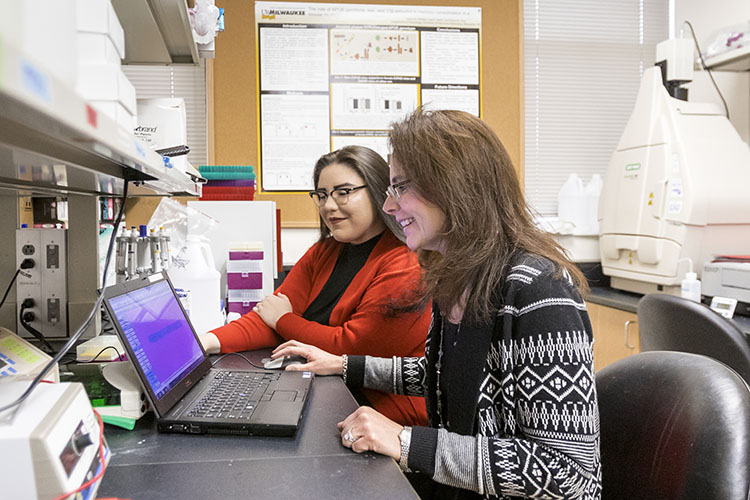 Sarah Philippi has been working with Karyn Frick, professor of psychology, since the second semester of her first year at UWM, focusing on the neurobiology of learning and memory.

Over the past year, she’s been studying the interactions among the potent hormone 17β-estradiol, sex and the APOE genotype on Alzheimer’s disease, using mice specially bred to exhibit Alzheimer’s pathology. The mice are tested on a variety of behavioral tasks to examine these interactions.

The work involves two specific genotypes, APOE3 and APOE4, the latter of which is the leading genetic risk factor for developing Alzheimer’s. The results of this project will provide sorely needed information regarding Alzheimer’s, a disease that disproportionately affects women, Philippi said.

“We want to eventually transfer the knowledge to humans,” she said, helping other researchers get a better understanding of how hormones regulate memory consolidation.

Philippi’s interest in the topic grew out a first-year course on the physiology of psychology. When Philippi expressed her interest in finding out more about this area at the cellular level, her teaching assistant, Lisa Taxier, who worked in Frick’s lab, suggested that Philippi apply.

“I liked the idea of studying learning and memory and the role of hormones. It has been a really empowering experience to explore these topics firsthand as well as contribute to these research initiatives.” 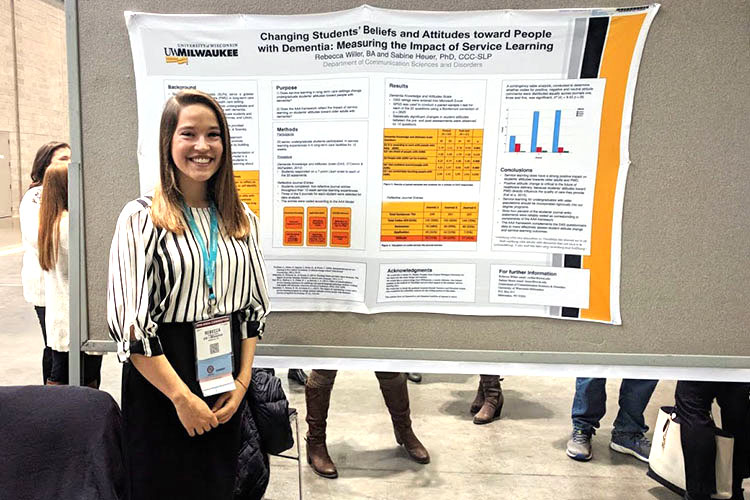 Willer started volunteering with children with special needs when she was in second grade.

She credits her mother with helping her discover a career that involved both science and her passion for those with special needs. At UWM, her research started the summer before her first year.

Last year’s research looked at the impact of service learning programs on undergraduate students working with older adults in care communities in the Milwaukee area.

Like many of UWM’s undergraduate researchers, she’s had the opportunity to showcase her work, presenting a poster at the annual convention of the American Speech-Language-Hearing Association in Boston during November. Her current research mentor is Sabine Heuer, associate professor.

She’s also participated in Honors College. “Honors College really helped me develop writing skills as well as public speaking skills. I used to hate writing, but I got over that fear of writing through the honors program.”

“Research has been the biggest part of my academic undergraduate career,” she said. “It has helped me develop relationships with my professors. I’ve learned things through the research that really help me in my classes that I’m taking now as a senior because I’ve already had exposure to a lot of the content.”