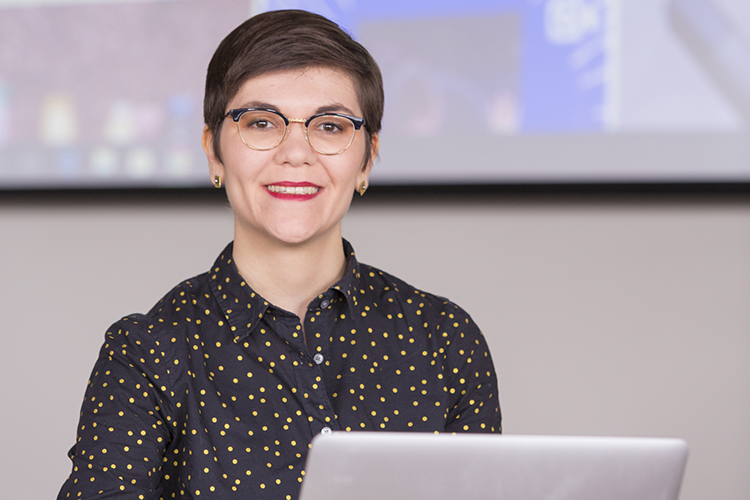 “The evidence is increasingly clear that children who are exposed to tobacco marketing in stores are more likely to start smoking,” said Linnea Laestadius, assistant professor in the Zilber School of Public Health. (UWM Photo/Pete Amland)

Tobacco products in Milwaukee are more aggressively marketed in stores in African-American and Latino neighborhoods than in white ones, according to a study led by a public health researcher at the University of Wisconsin-Milwaukee.

Results are similar to other studies showing that communities with lower incomes, lower educational attainment and more minority residents are targeted with significantly more tobacco promotion. This study is the first to document the trend in Milwaukee, said Linnea Laestadius, assistant professor in the Zilber School of Public Health.

In addition to the disparity, the researchers have identified a state policy obstacle that keeps local governments from enacting more stringent regulation of tobacco advertising. The results were published Aug. 2 in the journal Tobacco Regulatory Science and were presented to the Milwaukee Common Council earlier this year.

The study involved multiple stakeholder organizations, who conducted an audit of promotion and advertising practices at stores in three demographically distinct ZIP code clusters, with a random sample of tobacco retailers drawn from each.

Compared to retailers in the predominantly white ZIP code cluster, stores in the African-American and Hispanic areas are more likely to engage in tactics like placing tobacco next to candy, placing ads in the line of sight of children and offering price promotions such as selling small cigars individually and for less than $1, said Laestadius.

“The evidence is increasingly clear that children who are exposed to tobacco marketing in stores are more likely to start smoking,” she added.

While it’s legal for retailers to market tobacco products, she said, these practices are not used to the same degree in the white ZIP code cluster. The tobacco industry spends over $8 billion annually on cigarette advertising and promotion.

Laestadius sees this as the industry cultivating the next generation of smokers by targeting susceptible populations. “Addressing point-of-sale advertising would ultimately help us reduce the disparities we see in smoking-related diseases,” she said.

In Wisconsin, African-American adults and lower income adults have particularly high smoking rates, according to data from the Wisconsin Department of Health Services. Promotion of menthol cigarettes, which have higher carbon monoxide concentrations than regular cigarettes, was most common in the African-American ZIP code cluster.

The study team also pointed to a state level policy, called preemption, that bars local governments from establishing regulations that are stricter than Wisconsin legislation on advertising, licensing and youth access. For example, the rule means Milwaukee couldn’t adopt a ban on menthol cigarettes, which have long been targeted at African American communities. Changing state law would give cities a better chance to protect their residents and promote health.

Store audits were conducted by public health workers and volunteers at 195 tobacco retailers during three months of 2016. The auditors used the Standardized Tobacco Assessment for Retail Settingsform co-developed by the Centers for Disease Control and Prevention, specifically designed to help community groups collect data to inform policy change.

Others involved in the study were Heather Sebero of the Wisconsin Department of Health Services, Allison Myers of Counter Tools, Edgar Mendez of the Wisconsin Tobacco Prevention and Poverty Network in Milwaukee, and Paul Auer, a UWM associate professor of public health.