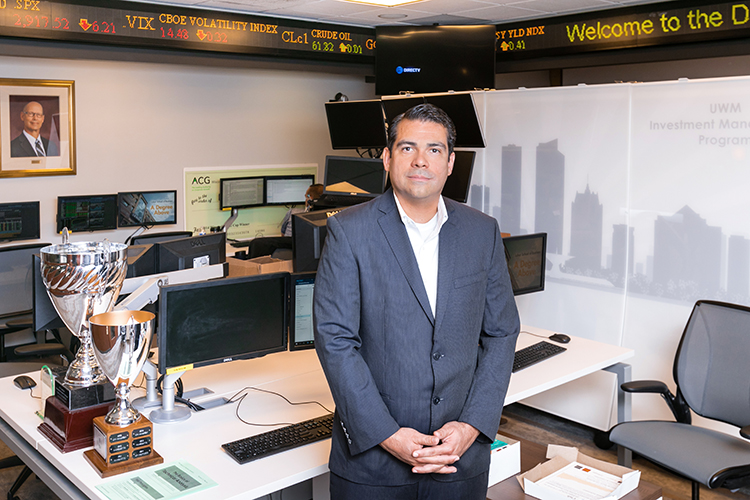 John Huck, an assistant professor of finance at UWM, has looked at the relationship between stock market performance and violent crime, in particular domestic violence. (UWM Photo/Elora Hennessey)

Investors’ stock market losses may immediately increase the incidence of violent crime, particularly domestic violence, according to a study by a researcher at the University of Wisconsin-Milwaukee. But surprisingly, stock market gains may also increase violence — just among non-investors.

John Huck, an assistant professor of finance, used daily reported crime data from 2,700 law enforcement agencies across the U.S. between 1991 and 2015. That 25-year period encompassed periods of ups and downs for investors and the U.S. economy in general.

Then, using high- or low-income locations identified by the U.S. Census as a proxy for investors and non-investors, he correlated the daily crime data occurring in both classes of neighborhoods with the same-day stock market performance.

Huck was even able to hone in on the kind of crime – assaults and homicides of domestic partners.

His data showed that an increase in stock returns was associated with a decrease in violent crime for investor areas. Non-investor neighborhoods, however, experienced more violent crime – on days when investors prospered.

The outcome suggests that when it comes to personal finances, people are concerned not only with the amount they have, but also with their position relative to others. This isn’t too hard to understand in a country where the top 1% currently owns more than the bottom 90%, Huck said.

“The takeaway is that volatile markets combined with inequality can be detrimental to society through increased crime,” he said. “But it’s the instantaneous nature of the findings that really makes the study unique.”

Also unusual about the work, he said, is examining the reaction of non-investors to stock market returns, an inclusion that is typically ignored in such studies.

That yielded a surprise for Huck, who said he wasn’t expecting to find any relationship with the non-investors.

It’s easy to just assume that non-investors are dormant players, he said. But the study shows that while non-investors are not participants in the stock market, they are passively exposed to it because of the constant public reporting.

Keeping up with the Joneses

There are plenty of previous studies that have linked the economic cycle to behaviors such as birth rates, health, suicide and alcohol use. Like Huck’s, some of these studies use what is called a “relative status” model, colloquially known as “Keeping up with the Joneses” models because they provide a benchmark on which people compare themselves.

Huck first became interested in tracking how people react to the stock market and the economy while working at a Chicago investment bank during one of the worst economic downturns since the Great Depression hit the nation. When mass layoffs began in December of 2008, he said, the stress was palpable both for those who lost their jobs and those who didn’t.

“That’s when I knew economic woes were closely tied to human behavior.”