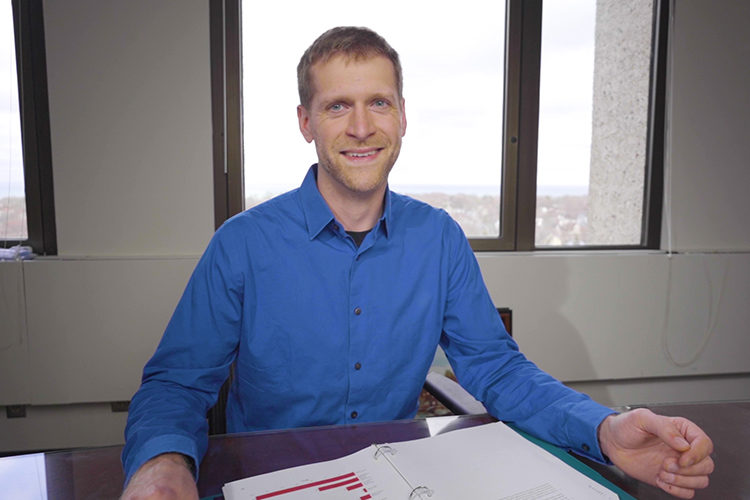 After graduating in May, Michael Levandoski plans to return to UWM to begin graduate school to do research on correctional programming, substance abuse treatment and historical trauma. (UWM Photo/ Marcelo Martinez)

Growing up in a working class family, Michael Levandoski didn’t really think about the opportunities a college education might give him.

Now a senior in social welfare at UWM, the first-generation student says his attitude has totally changed. “I loved the atmosphere when I started going to school. The learning, discussions and collaborations at UWM have been very exciting,” he said. “It opened up a whole new world.”

Levandoski’s journey to the university was a difficult one. During his late teens and 20s, he battled addiction, served years in jails and in prison for drug-related offenses related to substance abuse and possession and suffered three overdoses. His final overdose and return to prison resulted in new beginnings.

His experiences have helped shape his goal for his future as a counselor. In some countries, Levandoski points out, his history of substance dependence would have disqualified him. Fortunately, he said, that’s not the case in the U.S.

“When I started learning about mental health, addiction, relationships, parenting, depression, anxiety and all this stuff, I felt a pull to help other people who struggled.”

He started classes at Madison Area Technical College to earn an associate degree in human services and a substance abuse counseling license, and he came to UWM in 2019 after he decided he wanted to further his education.

“I wanted to keep going to school. In looking at where I could continue that was economically feasible and would accept my credits, UWM was at the top of that list.”

At UWM, he has been able to maintain a 3.9 cumulative GPA as a single parent who works part-time and does volunteer work.

“Mike has been a Life Impact Scholar since 2019 and has been one of the most dedicated students I’ve had the opportunity to work with in my seven years with Life Impact,” said Rachel Kubczak. She is life coach/director of the program, which helps support single parents at UWM.

In addition to Life Impact, Levandoski has embraced other opportunities at UWM, volunteering with a variety of student organizations, including as a co-chair of the Student Parent Advocacy Committee, studying abroad in Austria in the summer of 2019, and participating in the Ronald E. McNair Post-Baccalaureate Achievement Program from 2020 until Spring 2021. He presented his research on how UWM employees coped with the stress of the pandemic at the Spring 2021 Undergraduate Research Symposium.

Levandoski has reached out to others who are incarcerated through his work with the TRUTH Project, which provides nonjudgmental emotional support for men in prison.  He has done intensive weekend programs at the Racine Correctional Institution, and continues work with the program, though in-person visits to the prison have been curtailed because of the pandemic.

He relied on the support of others in turning his own life around. Sometimes that support came from unexpected sources. “A friend of mine had overdosed and passed away, but his mother stayed in contact with his friends. She wouldn’t give me money, but she sent books and allowed phone calls while I was incarcerated; she fed me and hooked me up with positive people on the outside.” His sister and brother-in-law gave him a place to stay when he got out of prison.

Instead of hanging out with old friends after he got out, he found new friends through groups like Alcoholics Anonymous and Narcotics Anonymous. “They all kept me connected and aware of my mental and physical health. I had a lot of support and was surrounded by people who encouraged self-growth—without the use of drugs.”

Support has been “a huge help”

In 2016, Levandoski had gained custody of his son, now 9 years old, about five months after leaving prison. And, he found Life Impact while enrolling at UWM.

“The support and sense of connection has been a huge help,” Levandoski said. “Before I even enrolled, I was communicating with Life Impact and was tied into the transfer advisor. They helped me learn about resources and groups,  and I got to speak with faculty and instructors. There were many opportunities I was able to take advantage of.”

Levandoski is graduating in May, and plans to continue on to graduate school to do research on correctional programming, substance abuse treatment and historical trauma. He’s been accepted to six graduate school programs, including UWM. He chose UWM.

“Mike’s own personal struggles have helped him feel compassionate about and sympathetic toward diverse and marginalized populations,” Kubczak wrote in a letter of recommendation for him. “Mike knows just how hard it is to work through significant barriers with little support and few finances. His background will allow him to lead by example with passion and commitment.”